Saina Nehwal: What Dedication Can Do

Saina Nehwal is India’s top-ranked badminton player and is World Number 2. She won three Super Series tournaments this year: Singapore, Indonesia and most recently in Hong Kong. She won the gold medal at the 2010 Commonwealth Games in Delhi 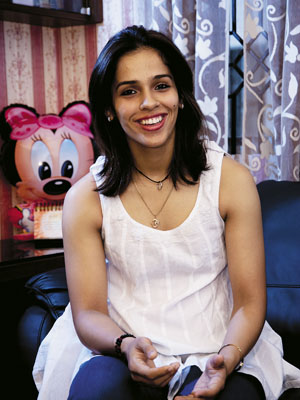 My Mentor: Pullela Gopichand
How long have you known him since? 2004
How did you get in touch with him? He opened the Gopichand Badminton Academy. I was 13 when I joined it.
How has he improved your skills: Improved my strokes, speed and mental fitness. Within a year I was playing international tournaments.
Advice that has stayed with you: Stay focussed and don’t get carried away.


In another age, in another life Saina Nehwal would have been a Spartan warrior. Spartans were taught to fight till they died, right from the time they were born. In 480 B.C. a 1,000-strong army of Greeks led by 300 Spartans defended the pass of Thermopylae against a Persian Army that was at least ten times that size.

Nehwal would have fit right in with the best of them. Her dedication to her craft is unrelenting. She began training when she was eight and has been at it for the past 12 years. Her goal in life: An Olympic gold. “I can’t believe I lost the Olympic gold in 2008,” she says, the pain on her face palpable.
Nehwal’s doing everything in her power to get hold of one. She trains for over ten hours a day. She doesn’t have a life outside of badminton. She hardly eats junk food, doesn’t have any friends outside the ones she meets at the Gopichand Badminton Academy where she trains, and doesn’t shop or go out much. “All sportspersons have lived life like that. It takes a lot to be a champion. Sachin [Tendulkar], Roger Federer, all of them have done that,” she says.

Her coach and mentor Pullela Gopichand recounts an incident after the 2008 Beijing Olympics. “We were on our way back and Saina was crying. I tried to lighten the mood but it didn’t work. So I told her that we would start practising the next day at 6 a.m. to shock her out if it. I meant it in jest. She looked at me seriously and said, ‘Sir, can we please start at 7 instead of 6?’ I was shocked.”

She burst on to the senior circuit four years back and has moved from number 140 to number 4 in the time. She knows she is a champion and she likes the attention she gets because of badminton. “I am happy kids look up to me as an icon. And since I spend my whole day training, I have no private life. So the media can’t write anything about that,” she says.

Although media comparisons to Sania Mirza are unavoidable, she firmly puts it to rest. “The comparison was there; not anymore. I mean, they can compare if both of us are World No 2. She does really well in doubles but not in singles. I have won four Super Series’ which is the equivalent of Grand Slams. And she hasn’t won a single one. So there is no question of comparison.” She’s also won the gold at the 2006 and 2010 Commonwealth Games. End of argument.

Her rise to the top has as much to do with her hard work as with her luck when it comes to sponsors. Bharat Petroleum has been sponsoring her since 2004. She holds a job as a deputy manager with them. In 2005, the Mittal Champions Trust under Manisha Malhotra sponsored her and that allowed her to participate in any tournament she wanted for the next four years without worrying about money. Since 2009, she’s been handled by Deccan Chargers Sporting Ventures who look after her endorsement deals (she reportedly gets Rs. 1 crore a deal).

Her mother Usha Nehwal, a former state level player, says she knew Saina would make it big since a long time. “I used to play badminton at a club when she was very young and I used to take her with me. When she was six months old, lying down in her crib, all she could see was the shuttlecock being hit back and forth. And suddenly we heard this maniacal laughter. I got scared. Is it normal for a baby to laugh so loudly when people play badminton?” she laughs.

And her mother also made sure that she trained hard. As a kid Saina had to stay back an extra hour after all the other kids had left to play three extra rallies with fresh players. And that has held her in good stead since then. “Today she leaves as soon as the coach asks her to. I would have never let that happen,” says Usha Nehwal.

The last question of the interview comes up. We ask her if there’ll be another Saina Nehwal sometime soon. “No,” she says. “You have to train really hard to be like me. I can go on for the whole day but most girls today are very lazy. They won’t do it.”