Nintendo’s Wii turns computer gaming upside down. Unlike with other gaming consoles, you don’t just sit there pushing buttons; here you wave, punch, thrust, and motion sensors in the wireless controllers translate your gestures into virtual movement within the game.


With Wii Tennis (one of the five bundled games), for instance, you lob up an imaginary ball into the air, swing your controller as if it were a racquet, and on screen your character, called “Mii”, serves. With Wii Boxing, you plug a second controller into the first, take one in each hand, and your Mii’s gloved fists swing in concert with yours. You don’t have to know much about proper technique in the real game. Friends who’ve played both the real thing and the Wii version tell me that beyond basics there’s absolutely no correlation between real and Wii skills. 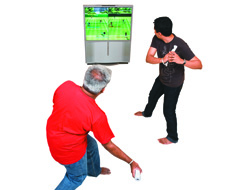 My wife and I decided to try the Wii as an exercise option. Neither of us have played tennis in real life. We picked up basics — serving, forehands, backhands, smashes — intuitively. Further refinements came by happenstance and some surreptitious research online.
How was it as actual exercise? Researchers have found that an hour of Wii Boxing or Wii Tennis burn roughly 430 and 320 calories respectively. I can testify that in a set or two, you’re working up a genuine sweat. The morning of day two of our Wii exercise programme, we both had sore shoulders.
There is the boredom factor though. The solution is to mix it up a little. The system also lets you play golf, ski, hula-hoop, and more. You could also invest in a few other games across genres like action, adventure, sports, strategy and racing, with costs ranging from Rs. 1,500 to Rs. 3,500. Try Legend of Zelda or Super Mario Galaxy.