Art of the wheel: Vintage cars that Chopard's Karl-Friedrich lusts after

For more than 30 years, Chopard's Karl-Friedrich Scheufele has collected vintage automobiles and raced around the world in them. At the Historic Grand Prix of Monaco, he makes a pit stop to talk about his classic cars, those he still lusts after and what driving can teach you about love 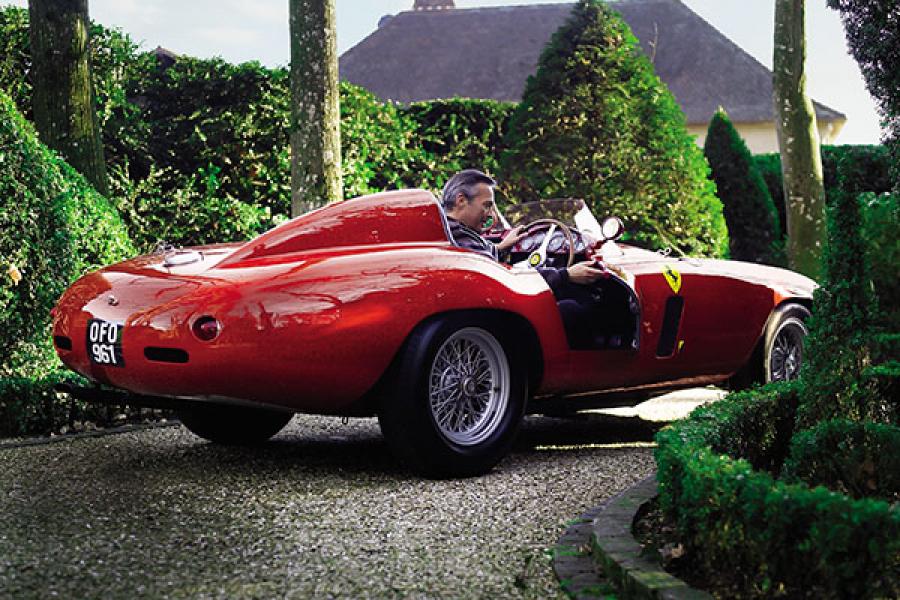 Living Fast: At his home in Geneva, Karl-Friedrich Scheufele with his 1955 Ferarri 750 Monza, which he and his wife, Christine, drove in the 2012 Mille Miglia

Karl-friedrich Scheufele is standing near the Casino de Monte Carlo alongside gleaming yellow Ferraris as his longtime friend, Belgian racing legend Jacky Ickx, does hot laps around the streets of Monaco. A reserved man with neatly greying hair, Scheufele prefers the noise and chaos of the pit lanes to the more elegant environs of the VIP suite that Chopard has high up in the grandstands. Trackside proximity means he can see only a few key corners of the famous race course, but then he’d miss out on hearing drivers talk strategy, the smell of burning tires and feeling the heat emanating from the labouring engines. It’s a blissful sensory overload for a man obsessed with vintage automobiles.

For three decades, Scheufele has managed to marry his obsession with Chopard, the business his parents bought in 1963 and then brought to the forefront of international jewellery and watchmaking prestige. (Now Scheufele and his sister, Caroline, are co-presidents of the company that is by all accounts still run like a family business.) Since 2002, Chopard has been the official timekeeper of the Historic Grand Prix of Monaco, and each year the company has created a limited-edition watch to commemorate the event and occasionally its drivers. The vintage race, which began in 1997, is typically run two weeks before the Monaco Grand Prix and features around 200 classic Formula One, Formula Three and other bygone sports cars. Depending on the class, competitors complete as many as 18 laps for a golden trophy and a giant laurel wreath.

“This race covers a lot of the values I cherish,” Scheufele says as he waits for Ickx to pull up in his 1936 Silver Arrow. When Ickx steps out of the car in his ivory fire suit, he hands his helmet to Scheufele, who keeps an eye on the large video screens showing live footage of million-dollar race cars from the ’30s and ’40s heading to the starting line.

A well-known and discerning car collector, Scheufele owns more than 30 vintage and modern automobiles. (“Not even my wife knows for sure exactly how many,” he says with a twinkle.) It’s a passion that took hold of him at a young age—his father, Karl, avidly collected Mercedes-Benzes and would take his son to vintage auctions the world over, teaching him about the world’s most beautiful cars. Karl-Friedrich even learned to drive on his father’s 1965 Jaguar Mark II 3.8. 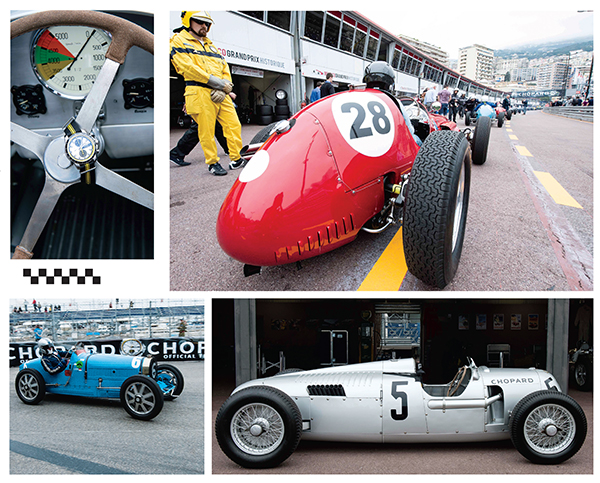 Now 56, Scheufele first started collecting at age 25—he bought  a 1963 Porsche 356 B Cabriolet that broke down beyond what he could afford to repair just weeks after he took possession. A second Porsche, a fire-engine-red 1954 Speedster, replaced it some years later and remains in the collection today. Also prominent in his portfolio, which he stores at his home in Geneva, are an original MINI, a racing Ferrari—even a ’50s-era Porsche diesel tractor.

But Scheufele is always looking to grow his collection. Atop the “must-have” list is a prewar Bugatti. But these things take time to do right, he says. And he doesn’t exactly collect cars based on their looks, no matter how achingly beautiful.

“Certain cars you dream about, and once you get to try them either you really connect or you don’t,” he explains as another class of vintage cars sets off for laps around Monaco. “You say, ‘No, I was expecting this to be different.’ Others you’ve never considered, but then you drive them and find out they are just great to drive. So I never judge a car until I’ve driven it. It’s not a piece of art to hang on your wall—at the end of the day a car is made to be driven.”

And Scheufele appreciates speed. The Silver Arrow that Ickx was driving has a 520-hp, 16-cylinder engine and a top speed of more than 210 miles per hour. Not bad for a car that’s pushing 80. It was a loud, hot and mesmerising display of cool as he wove through the course. “It’s a big emotion to drive these cars,” says Ickx, who has five F1 wins and six victories at Le Mans. “The sound is incredible, and the course is superb.”

A week later, Ickx was riding shotgun as Scheufele drove in the Mille Miglia, an open-road endurance rally in Italy that (except for a pause between 1957 and 1977 after some fatal crashes) has run between Brescia and Rome since 1927. Only cars produced earlier than 1957 can compete, and Scheufele has driven the race (just as Chopard has sponsored it) since the late 1980s. 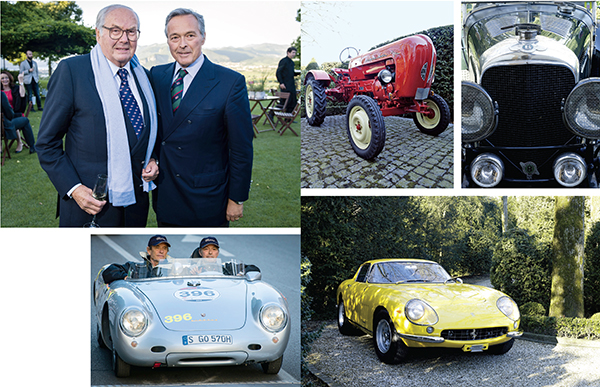 A partial spectrum: (Clockwise from top left) Karl Scheufele (left) taught Karl-Friedrich about vintage cars at an early age;Scheufele’s vintage car collection includes a red 1959 Porsche Diesel tractor, a 1929 Bentley (which he calls the “Green Elephant”), a yellow 1967 and Scheufele and Jacky Ickx in the
Mille Miglia

Not without mishap. Twenty years ago, Scheufele survived in a mistuned, open-top 1929 Bentley 4½ litre Le Mans Tourer (the “Green Elephant,” he calls it) with his then fiancée, Christine, fighting through blistering heat and springtime snow. The only warmth came from the engine; at one point, the gas pedal broke off. It didn’t end the relationship—he and Christine were married a few months later.

“It was really an adventure,” Scheufele says. “Once we went down a marked pass and had a huge problem to stop the car—I couldn’t engage the smaller gear. That was something. Plus the battery and the wipers didn’t work, and the steering was terrible. Everything was hard and difficult. It was lovely—except I was always complaining.”

More recently, a Porsche 550 Spyder RS proved quicker, if less than luxurious. Ever optimistic and philosophical, Scheufele says that particular outing afforded him a chance to truly test his driving skills. “A good driver is a smooth driver, someone who doesn’t scare his passengers,” he explains over tea at the Hôtel Hermitage Monte-Carlo. “You can be quick, you can be fast, but you have to be smooth.”

Just then, Scheufele shifts into a bigger metaphor about vintage cars and relationships. “It’s the same as when you’re in love,” he says, as a soft smile comes across his face. “It happens that you break down and you say, ‘Oh God, not again.’ But despite the problems you may have, you continue to love the car because you have to embrace the whole thing. It’s not about perfection; it will never be perfect. It can be love and hate. It can be a passion. But it’s always rewarding.”

Tweets by @forbesindia
The Social Experience Of Going To The Movies
2014: When India's Rich Got Richer