The contours of the Indian economy are changing and it is time the government takes note of the transformation: Startups are national assets and need serious enabling 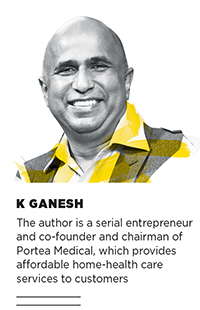 For the last two decades, successive finance ministers have taken the Union Budget way beyond a plain statement of how the rupee comes and goes. This year should be no exception, especially as expectations are running high. Budget 2015 needs to recognise that the Indian economy is changing in never-before ways, that a shared economy is a reality, that startups are a national asset and that private capital, if enabled, can help the government meet its social objectives.

Of course, there need to be accompanying changes in policy frameworks. We need new regulatory mechanisms for sectors like ecommerce as tweaking old laws may not suffice. We must remove, what I feel, are misdirected provisions in the new Companies Act of 2013 that make it almost impossible for new enterprises to reach escape velocity. We also need changes in accounting standards to redefine ‘assets’. It is imperative that we learn to value technology platforms that are today redefining the way we transact and helping ordinary citizens fulfil aspirations. We need to extend the private-public partnership model to services such as health care delivery.

Personally, I am convinced that the country faces two major challenges which need to be addressed on a war footing. The first is generation of jobs and the second is delivery of quality, affordable health care. While the first will boost the health of our economy, the second will ensure that we all live better and enjoy our economic prosperity. Clearly, both are aligned to the government’s professed commitment to inclusive growth.

India today boasts of having one of the world’s youngest populations. We are adding a million people to the working population every month. Where will they get jobs? Surely, the answer does not lie in creating more public sector behemoths.

On the contrary, freeing up resources that some of these PSEs consume and redeploying them gainfully would be the way to go.

It is here that, I believe, startups will play a crucial role and the budget needs to enable an ecosystem which will give a leg-up to new age entrepreneurship. Today, there are accelerators, incubators, angel networks and early-stage funds that are helping entrepreneurs take the leap of faith. Startups in mobile, cloud and social media space are taking courage from successful exits of companies like redBus, Just Dial, Tutorvista and Myntra. But infrastructure challenges in terms of roads, power and internet connectivity and an unclear tax regime cut into the enthusiasm.

Just look at Singapore and see what it has done to spur enterprise creation. Can we not do something equally powerful? Well, if I were the finance minister, I would declare the startup economy as a priority sector, ease bank lending norms for new companies, provide loans sans collaterals, and incentivise angel investment. 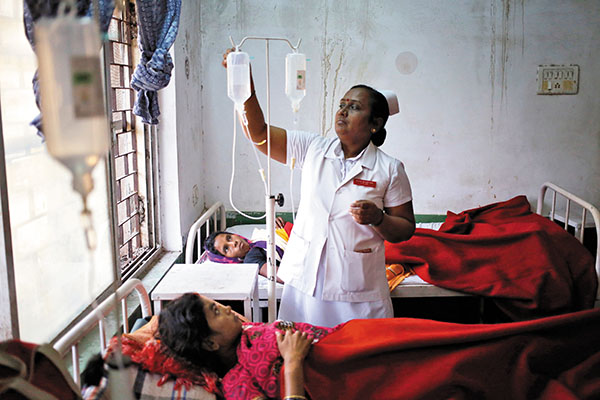 Image: Anindito Mukherjee / Reuters
India’s public spend on health care is among the lowest in the world. It allocates barely one percent of the GDP to health care

Most technology-based enterprises that use cloud computing, like ecommerce companies, aggregators and marketplaces, have very little to show by way of physical assets as it is defined today. Asking such companies for collateral is not just unfair, it is also adding to the liability of promoters who build enterprises at great personal risk.

Yet, they are creating jobs and enabling individuals to take home money that earlier remained a pipe dream. Take, for example, a delivery boy working for BigBasket or a taxi driver for any cab aggregator or the boys crisscrossing the city for Flipkart. All of them are collectively adding to the nation’s wealth.

Such companies are today embroiled in tussles with local governments over tax payments. The government of Karnataka has made a claim on Amazon and Flipkart based on tax laws that are not strictly applicable to new age aggregators. The laws are fuzzy on the stage at which the ownership of any commodity is transferred from the seller to the end user. The aggregator is expected to pay service tax for providing warehousing facilities and VAT on the goods that it carries. At any rate, the service of online commerce is being provided by cloud. So what exactly are you taxing?

Most startups fade out within the first two years. The government needs to take note of this and treat them differently. I recommend that the FM provides a service tax and VAT holiday for greenfield startups and exempts them from compliance requirements. For companies below a minimum threshold of, say, 20 employees, or turnover of less than Rs 1 crore, do away with any need for registration, filing for taxes, and other formalities so that entrepreneurs can focus on making the company viable. Put a time-cap of maybe 12 or 24 months before all these aspects start kicking in.

Ditto for the tax on angel investments that was introduced in Mr Jaitley’s last budget by which startups raising capital through the sale of unlisted securities within three years of investment would have to pay tax on short-term capital gains. Angel investors are, usually, individuals who help new companies get off the ground. Majority of such investments, in any case, go belly-up in no time. This clause ensures that angels would have to take a write off on their investments and not be able to set off such losses against income from a profitable investment in the same period. This is a serious disincentive and must be removed. 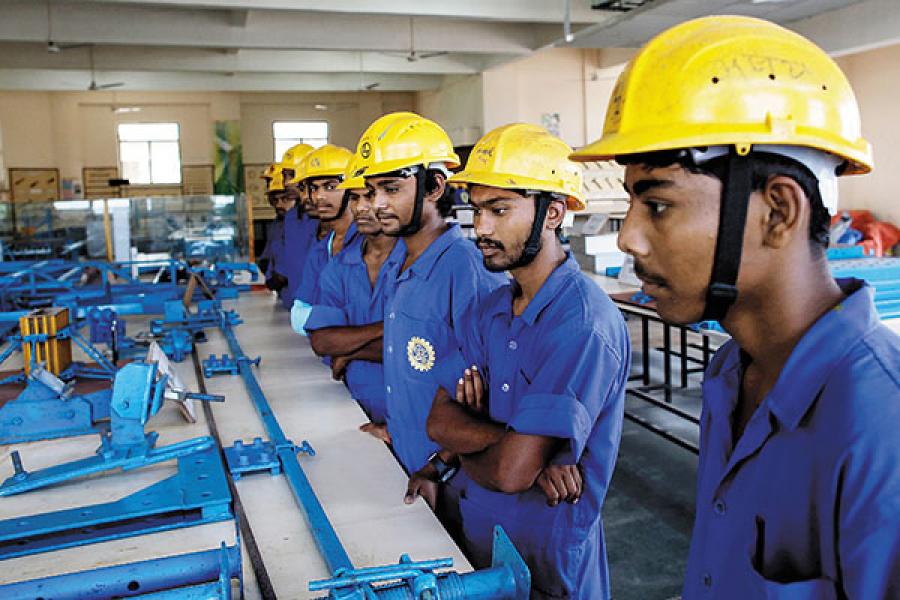 Image: Danish Siddqui / Reuters
India needs to focus on skill development and make its youth more employable as there is a serious gap between what the industry needs and the talent that the academic system throws up

Just as we have granted special status to investments in backward areas to spur development, the budget can incentivise new companies as they create millions of jobs. This would also be in keeping with the new slogan of ‘Make In India’. In this budget, Mr Jaitley could introduce a path-breaking measure by giving angel investors tax breaks, perhaps on the lines of Section 80G. By all means, tax them when they make money, but wait till then.

With GST implemen-tation just a year away, Budget 2015 must begin the process of making the tax regime simple, stable and tuned to new economic trends. And, for sure, it needs to do away with any retrospective tax. Any resultant shortfall in tax collections can be offset by a hard relook at those sectors that enjoy exemption and, of course, through better compliance.

At another level, the budget can even make it compulsory for companies to plough back a certain amount of their profits into incubation of startups, just as they now need to do for CSR initiatives. It can grant startups some cost benefits if they generate employment of a defined minimum level. The basic point here is that if we can grant tax incentives to galvanise money for natural disasters, we can do it for job generation too.

Another related issue that I must touch upon is that of skill development. There is a serious gap between what the industry needs and the talent that our academic system throws up. We need to invest in training that will make youth more employable. Past efforts like the creation of the National Skill Development Corporation and funding support for third-party training and placement agencies was a step in the right direction. This budget can extend similar facilities to companies directly by subsidising training costs. It would also help if the costs could be amortised over five years, just like R&D costs.

I now come to the other critical issue of health care. Our public spend on health is among the lowest in the world. We have consistently allocated barely one percent of our GDP to health care, irrespective of economic growth or the challenges at hand. Last year-end’s cut of close to 20 percent of the allocated amount has further shrunk the possibilities.

Access to proper health care is uneven. While tertiary care in many cities and towns is world class, primary care is broken and inconsistent in quality. An even bigger challenge is in the area of geriatric care. Alongside, there is an expanding threat from non-communicable diseases, which account for a majority of deaths in India. We need to leverage advances in remote medical technologies and create efficient delivery mechanisms, especially in preventive health care. Given the paucity of hospital infrastructure on the back of skyrocketing real estate costs, the focus must necessarily shift to non-hospital-based primary health care. Creating a pool of paramedics is the need of the day.

So where is the solution? To begin with, increase allocation for the health sector. Concerns over fiscal deficit notwithstanding, the FM needs to find ways and means to free up resources for health care. We can identify profligacy within government departments and control project cost overruns to conserve ill-spent money.

Extending private-public partnerships to health, where the government remains the policy-making and regulatory authority and private parties are entrusted with operations and execution, appears to be the ideal way to achieve scale, increase access and deliver quality health care. The government incurs a certain cost per patient who enters the public health system. The private sector can be roped in to provide local solutions at the same price. This will, for sure, democratise affordable and good quality health care delivery. After all, private enterprises will seek out ways to optimise resources and maximise profits. A good case in point is the National Health Service that runs most efficiently in the UK.

The budget needs to bring all health care offerings under the ambit of insurance, make micro-health insurance a reality and exempt the sector from service tax. Of course, the regulatory authority will need to ensure that the consumer gets value for money.

A lot has been said about the India growth story and of better days ahead. It is now time for some concrete action and Budget 2015 must define that.