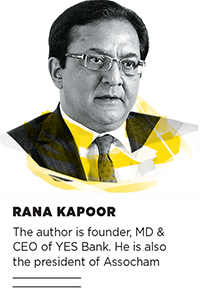 While the NDA government, in the last eight months, has introduced some structural changes in key sectors of the economy, suggesting that reforms are a constant endeavour, the Union Budget this year assumes paramount importance. The annual exercise comes at a juncture when policy priorities have shifted towards reviving growth, amid waning inflationary concerns, thanks to domestic policy responses and serendipitous global developments. The budget offers an opportunity for the government to shift its gears more emphatically towards growth. While the government’s policy focus was well articulated in the previous budget, the current budget would see a follow-through in the form of assertive allocations for its flagship projects.

The budget would need to maintain a delicate balance between growth revival and fiscal consolidation. While some loosening of the purse strings may not be viewed adversely, it is imperative that the government maintains a better mix of expenditure so as not to compromise on the quality of expenditure. Alternatively, the government could also explore a large-scale PSU disinvestment programme that would provide room for additional spending without compromising on the FRBM (fiscal responsibility and budget management) targets. In either case, the government should aim at remaining realistic towards its budget arithmetic and provide a credible deficit target. Realism is likely to be as lauded as pragmatism.

For the Union Budget to be “transformational”, it needs to embark on structural reforms that have the potential to set the economy on a long-term growth path by unleashing a self-fulfilling virtuous cycle. I outline policy priorities of the government for the budget that, in my opinion, can catapult the economy on to a sustainable and higher growth trajectory. 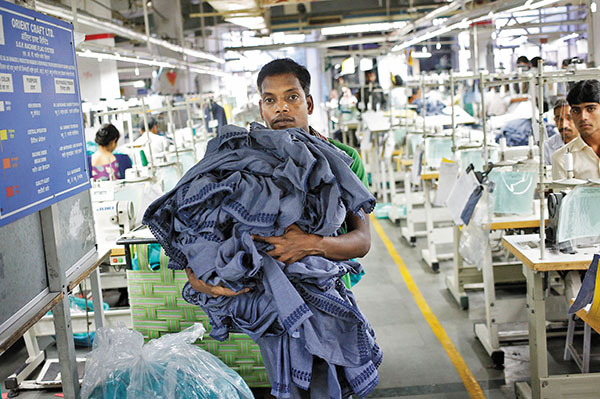 Image: Anindito Mukherjee / Reuters
The manufacturing sector in India needs to emulate the performance of the services sector to drive the next wave of growth

I. Transforming economic landscape via Make in India
To drive the next wave of growth, the manufacturing sector in India needs to emulate the performance of the services sector over the last two decades. India must raise its share of manufacturing in the GDP, from the nearly stagnant 15 percent to 25 percent by 2025, if it has to establish itself as a meaningful player in the global supply chains. The ‘Make in India’ programme of the government has the potential to deliver on India’s global and domestic manufacturing aspirations. As such, Budget 2015 must aim to integrate the foreign trade policy with ‘Make in India’ by providing incentives for ‘Domestic Value Addition’ (DVA)—the proportion of exports truly produced in India. Sectors such as textiles, which have nearly doubled its DVA component from 8 percent in FY95 to 18 percent as of FY14, along with electrical components and machinery exports should receive adequate budgetary support to establish India as a manufacturing hub for these.

Further, to improve competitiveness of the manufacturing sector, India needs to usher in business and bring about labour transformations. To improve India’s rank in the global ease of doing business survey to 50 in two years, the government must adopt a two-pronged micro approach. It should aim to replace archaic regulations with transparent, credible, predictable and streamlined processes, along with new support structures, to enable business efficiency and competitiveness. Further, the budget could announce the setting up of an independent resource regulator, especially for coal as a sector, to oversee the progress of mining rights and licences and adjudicate on disputes, if any. In addition, redressal of issues with regard to availability of natural resources could see a phasing out of import duty on iron ore from the current 2.5 percent, along with an imposition of an export duty on bauxite to leverage India’s natural advantage for the mineral.

II. Infrastructure as an enabler
To ensure the success of ‘Make in India’, India needs to bridge its infrastructure deficit in roads, ports, power and a host of other enabling sectors. With regard to this, the creation of 100 smart cities is an idea that the Modi government has leveraged well. For the creation of these smart cities, policymakers must identify ‘anchorages’ in the form of an existing industry or cluster of industries and create a brownfield ‘smart city’ around it. The upcoming budget could be used as an opportunity to announce a few such target cities. Identification of these cities will attract new investments to serve the objectives of fulfilling infrastructure and urbanisation requirements, while creating jobs in the region. It is critical to ensure that the concept of a ‘smart city’ is driven by economics and not just technology. 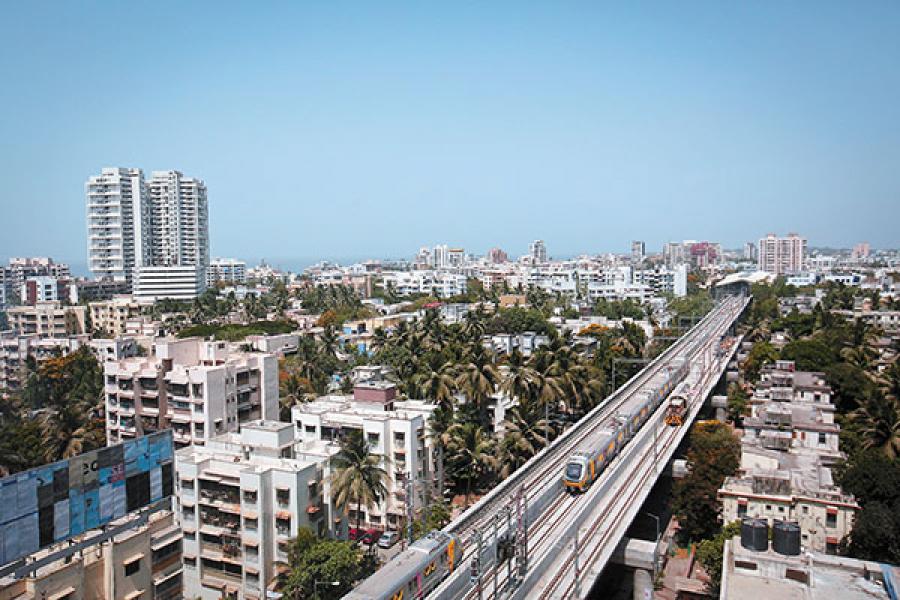 Image: Danish Siddqui / Reuters
India needs to bridge its infrastructure deficit in roads, ports, power and a host of other enabling sectors to ensure that the ‘Make in India’ initiative is a success

The complementary aspect of infrastructure creation is its financing. It is widely estimated that India’s infrastructure financing needs to stand at close to $1 trillion. Over the last several years, gaps in public policy have been fastened together by public-private-partnership, albeit with limited success. To be able to successfully scale up infrastructure, India must redesign its PPP model, where the role of the government is limited to that of a facilitator and an enabler. In addition, redistribution of risk allocation, ensuring transparent renegotiation of the terms of a project, independent regulators and a speedier resolution mechanism can give a boost to PPP projects. Further, the budget could allow the floating of smart city bonds and green energy bonds, within the infrastructure bonds category, to help finance infrastructure development in the proposed cities. Municipalities backed by respective state governments could act as issuers while the subscription could be open to domestic investors, FIIs and multilateral institutions. The budget could also aid in developing a local currency bond market by easing regulations to disclosures and giving tax incentives.

III. Technology-driven social inclusion
The government has rightly embarked on an inclusive approach towards growth. The recent Jan Dhan Yojana initiative has spearheaded the inclusion of the unbanked masses into the financial sector by facilitating the opening of 11.5 crore bank accounts. But this is only one spoke in the wheel. To enable inclusive growth, India will need to address demand-supply gaps in at least three other key areas—health care, education and public services. Towards this, the commitment of the government to its flagship programme of ‘Digital India’ can be revolutionary in paving the way for delivering technology-enabled services. In this spirit, the ‘Digital India’ programme is likely to see increased prominence in the budget.

The government is expected to carry forward its vision articulated in last year’s budget by enhancing allocations for various programmes under the project. The previous budget had allocated Rs 500 crore for Digital India initiative, Rs 100 crore for setting up virtual classrooms and Rs 100 crore for promoting ‘good governance’ through IT. Given the massive scope and scale of the programme (Rs 1.13 lakh crore approved by the cabinet), it is expected that comprehensive implementation of the project would open up new avenues for private sector participation. Eventual migration to digital platforms would help the government to improve efficiency and plug leakages in its schemes like MGNREGA (Mahatma Gandhi National Rural Employment Guarantee Scheme) and DBT (Direct Benefit Transfer), and allow concurrent clearances for projects by simplifying procedures. Given the government’s strong focus on leveraging technology, the budget could dovetail the government’s vision on Digital India into concrete and assertive allocations.

IV. Transforming relations: Centre and states
Co-operative federalism and decentralisation of power has been a core development ideology of the NDA government. The budget is expected to further this through greater delegation of spending powers to states following the adoption of the recommendations of the 14th Finance Commission. In return, the Centre can expect to seek greater active cooperation from the states to ensure smoother execution of developmental programmes that are sponsored by the Centre but implemented by the states. Co-operative and competitive federalism would also pave the way for creating an environment of trust with states participating more willingly in the reform process.

The apparent end of the commodity ‘super-cycle’ and the onset of monetary policy easing amid a war chest of forex reserves have provided a rare economic tailwind for India. This extraordinary confluence of positives provides a unique opportunity that the government must seize. Measures taken now have the potential to generate multipliers that, over the next couple of years, can pave the way for 8 percent growth. De-bottlenecking of the supply side, creating conducive conditions for manufacturing to flourish, simplifying of tax structures and initiating expenditure reforms remain critical.

It is time for the fiscal policy to complement the monetary policy in an endeavour to improve India’s potential. Amidst vulnerable pockets of global growth, India remains a bright spot. It is time the policymakers clinched this fortunate confluence of economic conditions to transform India into an economic powerhouse.

Tweets by @forbesindia
The 10 challenges before Arun Jaitley in Budget 2015
A riskier world, but businesses surge ahead