Silk reelers in Ramanagara, Karnataka, blame the availability of cheaper material and GST as well as the absence of an organised market for their woes 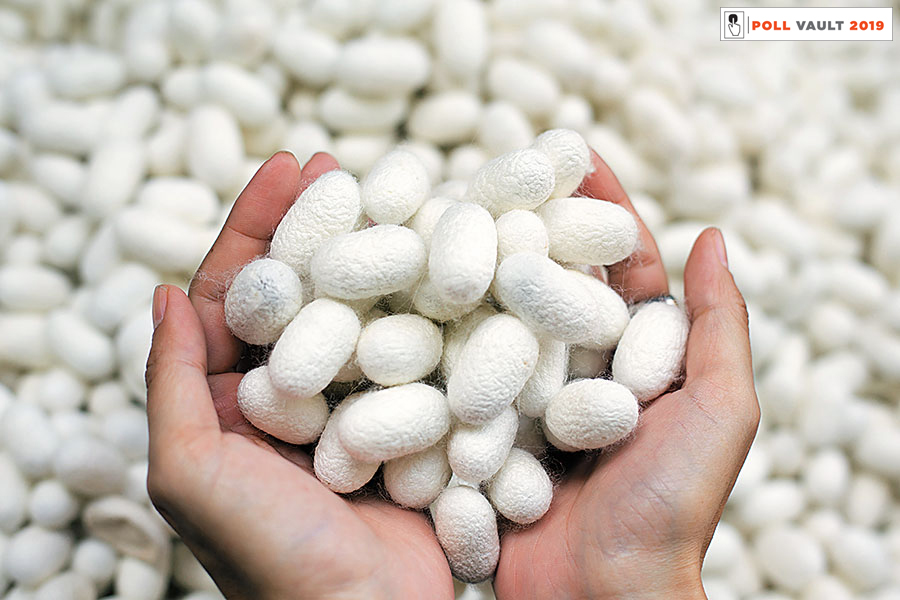 Prices of silk cocoons have fallen since September 2018
Image: Shutterstock

Ramanagara became famous in the 1970s when the blockbuster Sholay was shot there. As you enter the town, about 50 km from the southwest of Bengaluru, a huge sign greets you: “Welcome to Silk City, Ramanagara”. Almost half of India’s raw silk production takes place here, with Karnataka accounting for 60 percent of the total production. This is not all. Asia’s largest silk cocoon market is in Ramanagara where sericulture farmers from all over India sell their cocoons in the Government Cocoon Market. To extend support to the farmers and silk reelers, this market works 363 days a year except on January 26 and August 15. India is the second largest producer of silk in the world after China.

The market at Ramanagara is essentially a huge hall, with hundreds of large metal trays piled with cocoons. This is where farmers sell their cocoons to silk reelers, who produce raw silk from these cocoons. The silk reelers stop at each tray to inspect the cocoons and bid on them using a mobile phone app built for e-auctioning of the cocoons. Two types of cocoons are sold in this market: Cross-breed and bivoltine.

For the past few months, however, the farmers have been unable to fetch desirable prices for their cocoons. The average price of cross-breed silk and bivoltine silk cocoons, which used to be ₹380 and ₹490 respectively till September 2018, has dropped to ₹280 and ₹350. “We used to get good prices for our cocoons but now the prices have gone down so much that we incur a loss. I have to transport my cocoons from Maharashtra to Karnataka, which involves a lot of expenses. To sell all our produce we have to compromise on the price and accept the price offered by the silk reeler for our cocoons,” laments Shahji Keshav Mile, a farmer from Solapur district in Maharashtra. 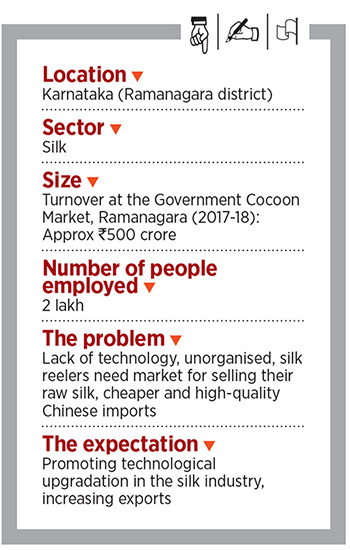 The biggest reason for the lower demand and consequent fall in prices is availability of cheaper and higher quality raw silk from China. Import duties on Chinese raw silk stand at 11 percent, and the landed cost works out to ₹4,800 per kg. Local raw silk is available for ₹4,600 per kg. The price of raw silk in India depends on the selling price of Chinese silk and it varies accordingly.

Farmers and silk reelers are also unhappy with a 5 percent GST on silk yarn and fabric. GST is not applicable on cocoons and raw silk, but farmers and silk reelers have to bear the extra burden because it is passed down the supply chain. Munshi Basaiah, deputy director of sericulture in Ramanagara, explains that all these problems arise because things are not organised at the farmer and silk reeler level. “The government is extending as much support as it can by providing support prices to the farmers for their produce. The production is good, we’re receiving almost 30 metric tonnes of cocoons every day at the market. But the demand for silk has gone down.”

The introduction of GST has made it difficult for the reelers to sell raw silk out of Ramanagara. “Before GST was introduced, we used to put material in our trucks and try and sell it to the traders directly in Tamil Nadu, Andhra Pradesh and other neighbouring states. It is hard to convince the GST officials that GST is not applicable on raw silk. The biggest problem is the GST officials don’t have sufficient knowledge about raw and twisted silk. The fact is that 5 percent GST is applicable on silk yarn and not on raw silk; it is hard to explain this to them,” says Mohammed Tanzeem, a silk reeler from Ramanagara.

Earlier there were 14,000 silk reelers in the state; now there are only 6,540. The silk reelers have been demanding an organised market where they can sell their raw silk. Habeeb Ulla, another silk reeler from Ramanagara, says: “We struggle to sell our raw silk. Middlemen buy raw silk from us and take a commission of ₹100-150 per kg and sell it to the traders, twisters and weavers. We also want our raw silk to be purchased by twisters directly; we don’t want any middlemen.” 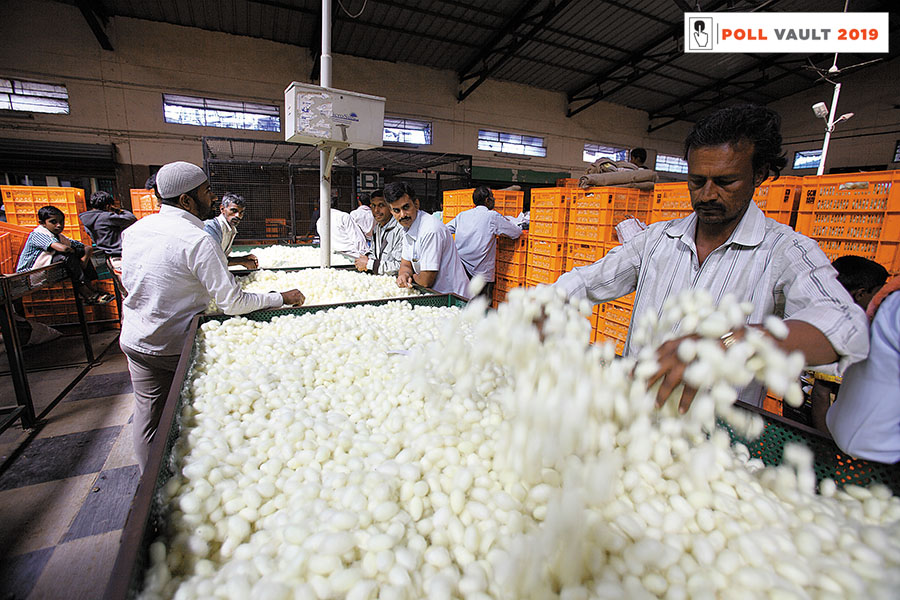 At the Government Cocoon Market in Ramanagara, reelers inspect cocoons and bid on them using an app
Image: DominiqueBerbain / Gamma-Rapho via Getty Images
The state used to have organised silk exchanges in reeling centres to enable the sale of raw silk. Under the Karnataka Silkworm Seed, Cocoon and Silk Yarn (Regulation of Production, Supply, Distribution and Sale) Act, 1959, it was compulsory for reelers to transact the silk only on the silk exchanges. “The silk transaction became optional with the Central Silk Board Act (Amendment) 2006. Due to this only 30 percent raw silk is transacted on the silk exchanges and the rest through the open market,” adds Ulla.

Silk reelers use traditional methods to produce raw silk. There are different types of reeling devices used by reelers in Ramanagara—charkha, cottage basin, multi end reeling and automatic reeling machines (ARMs). Most reelers use cottage basin devices. “We cannot afford anything more than the cottage basin machines for which the government gives us subsidy when we purchase them,” says Ulla.

But it is the raw silk produced using ARMs that is of international grade. If more raw silk is produced using these machines, India may not need to import silk from China. “Of 1,100 silk reelers in Ramanagara, only nine use ARMs. In Channapatna (a town in Ramanagara district) and Ramanagara, we have already selected 21 reelers and given ₹1 crore subsidy per unit. We’re waiting for the beneficiaries to take up these ARMs. In India 72 members have ARMs, of which 27 are in Karnataka. With ARMs, more employment will be generated and the quality of silk will be elevated. China imports will be prevented,” says Basaiah.

Indian silk has attracted global interest since ages. The principal buyers are the US, Canada and Europe. But exports of raw silk are negligible (less than ₹1 crore annually), even as imports rose to ₹1,218 crore in 2017-18, up from ₹1,092 crore a year ago, according to data compiled by The Indian Silk Export Promotion Council (ISEPC).

ISEPC Chairman Bimal Mawandia points out that exports have been declining by 15-18 percent each year for the past five years. “In India, silk demand has gone up but supply of raw silk is reducing due to which India is unable to fulfil the demand of the domestic market so there is a lot coming in from China and other markets.”

ISEPC’s demand is that the duty on raw silk imports should be brought down from 10 percent to zilch. “Once this is done, our product after value addition and conversion can be cost-effective in international markets. Also, there are a lot of transactional costs, which should be studied and these should be brought to zero,” adds Mawandia.

Tweets by @forbesindia
From protest to product: How to reconcile a social movement with business
Robo-advisor: The newest way to invest