Its spaghetti Western flavour, punchy dialogues and technical finesse made it stand out then, and now

“Think of a one-line description of Sholay,” filmmaker Dibakar Banerjee said a few years ago. I was sitting in on a script session for a film Banerjee was producing; the others in the room were Kanu Behl, who was helming this film (eventually made as Titli), and Sharat Katariya, who recently directed the delightful Dum Laga Ke Haisha. We looked at each other, made mumbling noises about a policeman-thakur seeking revenge on a bandit, hiring two mercenaries and so on. But Banerjee had a more lateral take, based on the character graphs of the two hired guns, Veeru (Dharmendra) and Jai (Amitabh Bachchan). “Anaath bachchon ko family milee [orphaned children got a family],” he said, enunciating each word slowly. Two orphans find a home, a family and a community. That’s what the film is about.

First, the “anaath bachchon”. Think about it for a moment and you’ll see how unusual it is for a mainstream Hindi movie of that vintage, made on the cusp of the Amitabh Bachchan era, to have for its two leads men whose families or backgrounds we know zilch about. There is not even a mention of a mother—the emotional anchor for generations of Hindi-movie leading men—either real or adoptive. (“Mere paas maa hai”, an iconic line from another key Bachchan film—Deewar—released the same year, would sound ludicrous in the Sholay universe.) The one character who might fit the mould—Basanti’s fretting mausi—features most prominently as a foil in a comic scene.

It is also well-recorded that Sholay’s visual sense (so much grander than other Hindi movies of the time) and its archetypes come not from the theatre traditions that sustained Hindi cinema for decades but from foreign sources. The words ‘curry western’ tell the tale, pointing to how this film has its provenance in Sergio Leone’s ‘spaghetti westerns’ (an important scene is directly inspired by—the less charitable would say “copied from”—Leone’s Once Upon a Time in the West and the more traditional American Westerns of an earlier time, such as the work of John Ford, not to mention the Japanese classic Seven Samurai). Director Ramesh Sippy brought in American technicians for the action sequences, and there is an attention to detail—in the use of sound design, for instance—that was rarely found in the Hindi movies of the time.

But the second, conflicting point is that the rootless heroes are not allowed to stay “anaath”: They are admitted into a society, made part of a self-contained little village bound by a temple and a mosque. And they go from being money-minded (albeit good-hearted) to wanting to end Gabbar Singh’s reign of terror for philanthropic reasons; they have come to feel that they are part of the world threatened by the dacoits.

When one of the heroes dies in the end (and note how his death allows this traditional society to retain its preferred position that widows must not remarry), he is mourned by the whole community. His heartbroken friend leaves the village, in the manner of the drifter from the conventional Western, but Veeru’s departure can hardly be equated with Clint Eastwood riding away into the sunset, or John Wayne at the end of The Searchers realising that ‘home’ has no meaning for him; Veeru is joined by Basanti, they will presumably have a family of their own, perhaps even return to Ramgarh.

And, of course, the film has the episodic structures—and the generous mixing of tragedy, action, comedy, romance and music—that come from a homegrown Indian tradition. (No songs in Once Upon a Time in the West or Seven Samurai!)

This schizophrenia inherent in the film can be summed up in an uncharitable Filmfare review of 1975: “An imitation Western—neither here nor there,” it said. You can grasp the point being made without agreeing with that assessment of the film’s quality.

So what is Sholay’s legacy? The answer that immediately comes to mind is that there isn’t one, that the film existed in its own special void and didn’t affect anything in mainstream Hindi cinema: A huge boulder in a stream, watching impassively as the stream, and its smaller pebbles, continued to flow around it.

Consider some of the notable things it did, which following films couldn’t replicate with any conviction. Such as the culture-reshaping popularity of the dialogue: Catchphrases continue to be widely used today, in parodies and tributes. Growing up, one of my favourite audio-cassette sets was the Sholay ‘dialogue album’, which, in a neat inversion of most cassette releases, contained most of the film’s spoken lines while the songs were condensed to just 10 to 15 seconds each! Salim-Javed’s script, packed with memorable one-liners and monologues, facilitated this. 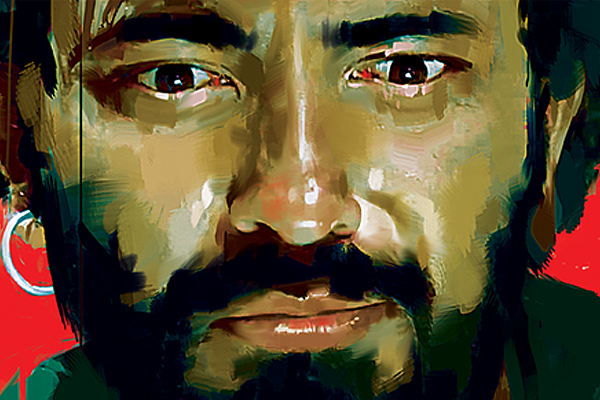 Image: Sameer Pawar
And yet, the concept remained a one-off. (Feroz Khan’s Qurbani had a dialogue album too, but there was no comparison in terms of popularity.) Sholay’s lines are ubiquitous. Even someone like Naseeruddin Shah, who has often derided the film as an over-praised pastiche of other movie moments, couldn’t escape them. In the low-key ‘parallel movie’ Mohan Joshi Haazir Ho, Shah’s character growls, “Kitney aadmi thay?” meaningfully. The “aadmi” he is referring to are goons sent by the film’s villain-in-chief… played by Amjad Khan.

Speaking of which: How to make sense of Gabbar Singh, the brand? Here was a genuinely frightening villain—someone who guns down a child with just a steely, mildly amused look in his eye—who somehow became so popular with viewers that he could appear in a Parle-G biscuit ad afterwards! And a major reason for this was that Gabbar’s dialogues, spoken in Khan’s unforgettable voice, were so quotable and recognisable that the character became fun, almost likeable, and could develop an independent life outside of the film even though he was terrifying in the film itself. (By way of comparison, we do have the famous ‘Ajit jokes’ from the 1970s; yet no one would pretend that Ajit’s cartoonish villains in those films were truly menacing.) So here is that rare instance of a film that is completely immersive while you’re watching it—you are sucked into the world of Ramgarh and the evil besieging it—and yet has become central to the self-referential, nudge-nudge-wink-wink culture that is now so much a part of popular cinema.

“The greatest star cast ever assembled” gushed the publicity machine for the film when it came out, and indeed Sholay helped open the floodgates for a glut of multi-starrers. Yet the ones that followed didn’t use its actors as interestingly or give them well-defined, well-written roles. In the 1980s, an ageing Dharmendra—so splendid in Sholay as both action hero and comic buffoon—devalued himself by appearing in a string of multi-hero “badle ki aag” films. Nor did fight scenes in subsequent action films achieve the intense, claustrophobic quality of this one; even Ramesh Sippy himself couldn’t replicate it in his later works, Shaan and Shakti.

But while Sholay did not immediately change anything in Hindi cinema, we can say, with the benefit of hindsight, that change was happening in increments. More than 10 years later came tighter, more stylish action sequences in films by JP Dutta and Mukul Anand—notable commercial directors whose eye for the big and small moment was influenced by Sholay’s aesthetics—as well as standalones like Vidhu Vinod Chopra’s 1989 Parinda. Then, in the mid-’90s, Ram Gopal Varma brought a new grittiness to underworld movies with Satya. (Ironically, Varma would later make the execrable Sholay remake, Ram Gopal Varma Ki Aag.)

And today, we have the multiplex culture where many of the sharpest directors have self-consciously moved away from Hindi cinema’s earlier idioms and wear their new influences—Korean, Iranian, Taiwanese films—on their sleeves. There is greater attention to shot composition, framing, set design and detail; there is a eulogising of psychological realism that is at odds with the mainstream excesses and stereotypes of an earlier time. And Sholay, in some ways, seems to fit the present-day milieu better than it fit back in 1975.

This sounds like a complicated argument, but I’ll pare it down: Until around 15 years ago, it was possible to look back at Sholay and think, “This isn’t a typical Hindi film, it’s an outlier; too technically polished and tightly constructed.” But today, with the multiplex cinema having reshuffled our notions of what a widely seen Hindi film can look like (I’m talking about the work of Dibakar Banerjee, Vishal Bhardwaj and Anurag Kashyap among others), it becomes easier to see Sholay as being a distant forerunner to what is happening today.

And one sees this in conversations with many of today’s directors and scriptwriters, including a sort of a confident young person who has a polite disdain for the distant past. Speak to them about the mainstream Hindi cinema of the ’70s or ’80s and they will be evasive, look shifty or sheepish; at best they might endorse some of those old movies for their kitsch value. Bring up Sholay, on the other hand, and the tone becomes a little more respectful and approving. Eyes light up, as if to say, yes, that one was pretty good. It’s the sort of old Hindi movie that a new generation of world cinema-DVD-hoarders can relate to, just a little.

Still neither here nor there—but in a good way.