Urban India is rediscovering the bicycle. We give you a quick guide to joining in on the ride 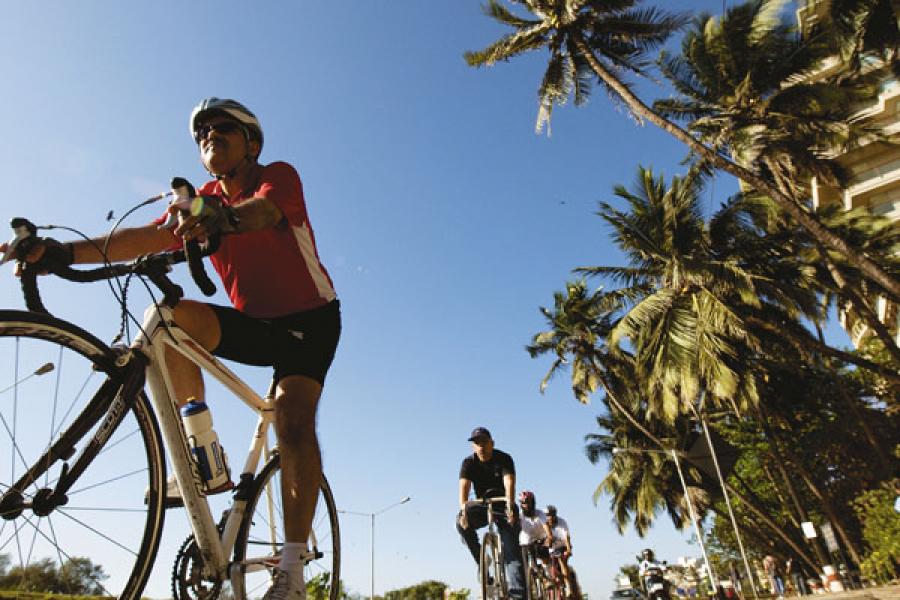 In the West, the 1890s are considered the Golden Age of cycling. After that, of course, the car took over. In less developed economies, the cycle never really went away. Even now, with the pace of change ever accelerating, large parts of our economy still run on pedal power.

But in our metros, long time-and-energy-sapping commutes, pollution, and the need for speed have meant that cycles were disappearing from our streets.
In the last few years, however, that’s begun to change. Increasing numbers of people of all ages have taken to bicycles as an alternative to, even a replacement for, the morning walk or jog. Some hardy souls even brave rush hour traffic and use their bikes to commute to work!
For some, it’s fitness that has prompted the change. Others want to use a more environmentally-friendly form of daily transport. The leaner and tougher ride as part of their preparation for bicycle tours and that new phenomenon, the cyclothon. Whatever the reason, bikes are back.
“I started bicycling as my husband was into it and he is a fitness freak,” says Reena Chengappa, co-founder, MySunnyBalcony, Bangalore. “Although I was hesitant at first, I finally bought my bicycle and pushed myself to cycle through a busy stretch in Indiranagar. Since then, I have not looked back.” Anita Roy, editor at the publishing house Zubaan in Delhi, sold her car and commutes to work on a cycle now. It’s part of of here commitment to a greener lifestyle. There are thousands like them around the country, who ride solo, or who are part of local cycling clubs in their cities.
Yes, cycling tends to be a very social activity. Ravi Ranjan, co-founder, Ride a Cycle Foundation and Tour of Nilgiris, says, “It is not a one man show, it is a community.” A great way to find these communities is to go online: cyclists.in and bikeszone.com are a great start.
Given the recent increase in cyclothons across the country, the Cycling Federation of India (CFI) stands energised. “We have planned a Tour de India on the same level as Tour de France. We have already received approval [by the Indian government] for this, and it should happen by August this year,” says V.N. Singh, CFI’s assistant secretary. This event will be open to national cycling federations across the globe and it is a bid to get interest in cycling as a national sport.
Sounds like a great time to get trundling? With help from Amit Bhowmik, founder and creator, cyclists.in, Rahul Mulani of Gear, the bike shop, and Rohan Kini, co-founder, Bums on the Saddle, we put together some basic tips and cycling routes to help you get started. 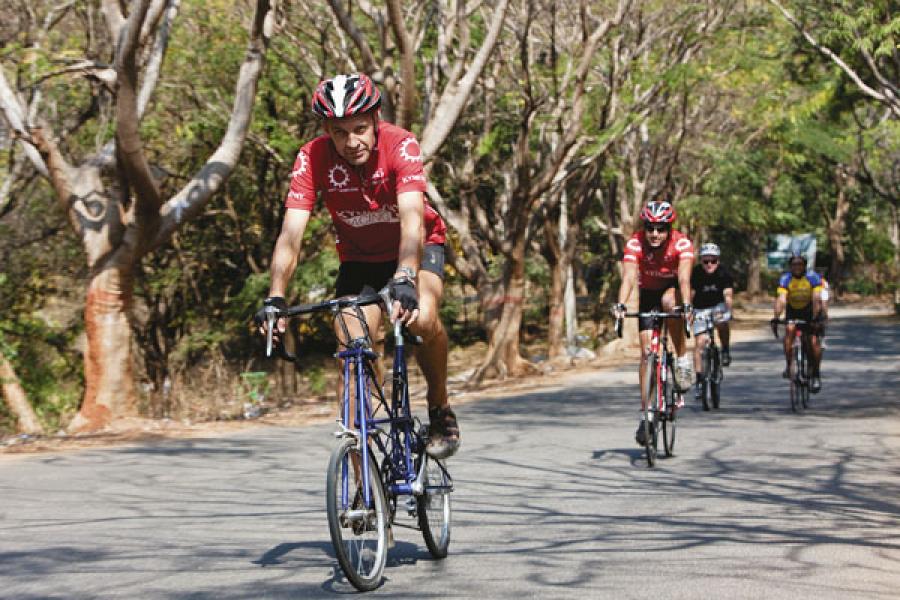 Image: Mallikarjun Katakol for Forbes India
It’s All About the Bike
It’s important to figure out what kind of cycling you want to do, and get the right sort of bike. There’s lots to choose from, and a bike for every one of them.
BMX bikes are small, and used primarily as stunt bikes. They have 20-inch wheels, and modified axles and frames to allow the rider to perform stunts. Average price, Rs. 20,000-Rs. 25,000.

Mountain bikes feature dual suspension, wide-tread tyres, and a tough frame to handle off-road terrain. For less demanding trails, you could go for a front-suspension or hard-tail ATB (All Terrain Bike). Off-roaders usually feature disc brakes for powerful stopping during downhill rides. Average price, Rs. 20,000.
Road bikes are built for speed. These are what you’ll see in pro races like the Tour de France. Slim frames, narrow tires, down-sweeping handlebars which require you to bend forward while riding. Average price, Rs. 50,000.
Hybrid bikes are a mix between mountain and road bikes; the riding posture is that of a mountain bike, but it has slim road tyres. Average price, Rs. 15,000
Time Trial bikes (TT bikes) are even more aerodynamic than road bikes. They typically feature aero-bars that force the rider into the most aerodynamic riding position. Prices start around Rs. 1.5 lakh.
Commuter bikes are your regular cycles which allow for short city commuting. Typically, they’re gearless, light, simple to maintain, cheap to purchase, and allow for add-ons like carriers or baskets. Mid-range costs are from Rs. 1,000 to Rs. 5,000, though you can spend much more.
Electric bikes are commuter bikes with a battery attached to the frame, which the rider can use to tackle tough slopes. Electric bikes tend to be heavy as a result of the extra weight, and tend to not give you much speed from the battery. They’re just about making a debut in India, so prices are unavailable, but going by international rates, a good mid-range would cost you between Rs. 40,000 and Rs. 65,000.
You can also get cool things like folding cycles, which collapse into something small enough to carry on to a bus, perfect for big metros. We couldn’t find any available in India yet. Saddles and Shorts
You make contact with your cycle with your hands, feet and backside. Gloves and proper shoes are important, but it’s crucial to make sure you get your seat (and the cycle’s) just right. The soft tissue between your legs is vulnerable, and long hours in the saddle can cause problems like numbness, even impotence. 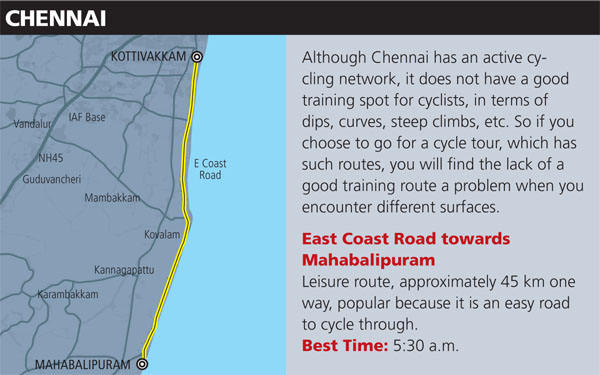 Cycle saddles were once made of leather, which mould to your shape over time. Today, most seats have a plastic base, with a leather, vinyl or lycra covering, and gel or gelfoam padding (feels like absorbent foam). The primary difference between a gel and gelfoam coating is that the former will relocate to areas of lesser pressure and the latter will get relocated to areas of pressure. Narrow racing saddles are okay for a time-trialler who is spending more time standing on the pedals than in the seat, but are a bad idea for anyone else. Split seats move the pressure points to the pelvic bones, with the split being lined with gel padding to increase rider comfort. The problem with gel, however, is that it does not wick moisture away from the body. 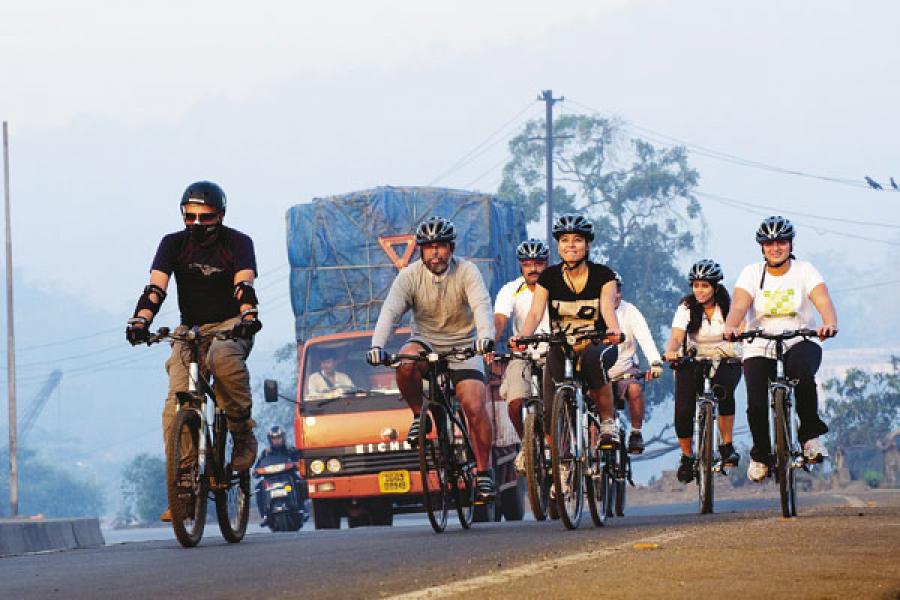 Image: Dinesh Krishnan
Don’t cycle in normal exercise gear. Invest in good cycling shorts. The repetitive movements of cycling can cause chafing and rashes, and the right shorts can minimise, even eliminate those irritants.

Standard cycling shorts were once made of wool, which isn’t the best thing to wear in a tropical climate, but now most people identify the skin-hugging spandex variety as the only kind. Less callipygian souls will be glad to note that you can also get baggy shorts.
Spandex gives you a good fit, with a number of panels that help it give the rider support in the proper cycling posture. Mot important: No seam between the legs, as this can cause irritation. Spandex, a mix of polyester, gives your skin the ability to breathe and wicks moisture away from the body. Baggy shorts usually have a tight inner layer and a more loose outer. They give you space for pockets to carry snacks or gadgets around.
But whatever fit you choose, the single most important thing is the chamois. Named for the leather it was once made of, this is the interior padding between your legs. Some shorts have them built in, with others you have to get them separately. Now also made of other modern materials in multiple layers, it protects the soft tissue between your legs from friction, wicks moisture, allows skin to breathe, and prevents bacteria growth.
This is important: Do not wear underwear under your cycling shorts; you defeat the entire purpose of their design. Besides, experts say, the chamois is much more hygienic than regular underwear. As long as you wash it regularly, that is! Extra tip: Wash your cycling shorts (and chamois, if you have them separately) in cold water, without fabric softener or any perfumed elements; these reduce the garment’s ability to protect against bacteria.
Bonus tip: There are different saddles, and chamois designs, for men and women. If your equipment supplier claims otherwise, go elsewhere!
Other Equipment and Accessories
If you plan to cycle anywhere upwards of 40 km a day, you might want to invest in some decent gear.
A cycling jersey made of dry-fit material ensures you are sweat-free and it also has pockets, which give you enough place to stash food to keep you going on the long ride. Don’t use running shoes; get yourself some specialist cycling shoes. Sunglasses if you’re riding in the day, reflective strips on your clothing if you prefer to ride after dark, bike water bottles, gel-padded gloves, knee- and elbow-protectors — all these make your ride easier and safer. Most important safety requirement: A good cycling helmet. In the event of a high speed prang, it could save your life.
These accessories could set you back anywhere between Rs. 4,500 to Rs. 16,000. Much higher if you’re the kind who loves designer labels!
Find yourself a good bike and accessories shop and keep going back. You’ll get the best deals and the latest know-how at your disposal.
Happy trails!
Also Read: India’s Best Cycling Routes

Tweets by @forbes_india
What's the Best Way to Make Careful Decisions?
Is the World Out of Recession?