Freedom from Gender: Imagining Equality for Men and Women in India 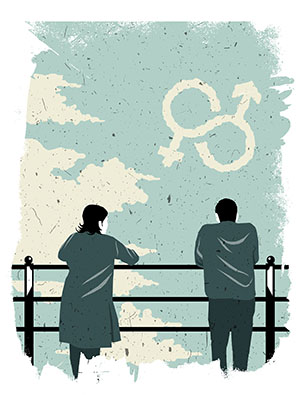 The idea that we are equal stops at the ground beneath our feet. The soil of India, the land of Bharat, is owned chiefly by men. According to the Food and Agricultural Organization of the UN (FAO), women account for only 9.5 percent of land-holders. Their figures drew on the agricultural census of 2000 and 2001, which found just 12 million women owned land, out of 120 million landholders.

Think of this another way: Out of all the factors that dictate whether you will own your own home—caste, class, economic status—the most significant is something you have little control over. If you’re born a man in India, you automatically have a chance in the land-owning lottery. If you’re born a woman in India, what are the chances that you will own your own home, inherit property, kneel down on a patch of earth and think, as you let a handful of dust slip through your fingers, that this is your land? Brutally low.

Think of the numbers I just cited. Those millions—the lonely, tiny figure of 12 million on one side, the large, dominant group of 120 million on the other—are not abstractions. They represent real people, actual families; those figures contain our histories as Indians, the history of families who were anxious to marry women into landed families, so that they would have something by extension, families who saw women as burdens, because they had nothing by definition. If we’re talking equality, and freedoms, this is where we start: With the absence of equality, built into the foundation stones of a society.

The definition of an Indian woman, extrapolating from these figures: An Indian woman does not own her own home, will probably not buy and own land in her lifetime, will almost certainly—except for a very few communities and regions—not inherit family property.

The definition of an Indian man is simpler: A man is someone who can own and inherit land. Men have property; women, mostly, do not.

In 2003, when Bina Agarwal, the great scholar of land rights and gender, interviewed a group of rural women, she asked them whether they might want the land they farmed or looked after registered in their names. Silence fell, and then one woman explained: “We are taking so long in answering because no one had ever asked us this before! It seems like a dream that we might have land of our own.”

For years, a worn internet meme suggested that women own only 1 percent of the world’s land; the FAO figures are more realistic, indicating that women own perhaps one-quarter of the world’s land. In Italy, women own 31.9 percent of the land; in Thailand, 33 percent; in the United Kingdom, only an estimated 19 percent. If, as Nick Kristof has written, women hold up half the sky, it is still hard to imagine what the world would be like if women owned half the earth.

Property is important; those who do not own property can become property themselves. In some parts of India, women don’t even own their names: Tradition demands that they change not just their surnames after marriage, but their first names as well, as if to underline that their old selves must be packed away and forgotten. And many laws, especially those handed down by the British, hark back to a time when a women’s chastity was her husband’s property. The laws on adultery make this explicit: It is a crime committed by one man against a husband, in respect of his wife, and those laws are there solely to punish men who would tamper with another man’s property. Most of the laws in India slam men and women back into strict gender roles: To be a man is to be the head of the family, the keeper of its property; to be a woman is to be, at best, protected, but almost always paternalistically. Few existing laws explicitly protect the rights of, say, the transgendered community or the gay and lesbian community—the laws do not have much room for gender ambiguity.

In the aftermath of the December protests against rape and the everyday violence women face in India, many women demanded that marital rape be made a crime. “The entire family system will be under great stress,” argued legislators, and Parliament refused to make it a crime. In many ways, what they were refusing to uphold was the idea that women’s bodies belong to themselves, an idea that is the subject of major debates in the US (over abortion), in Egypt, as women claim public space, and in India, as women try to move beyond the usual norms that would keep them “safely” at home. The dowry system in India has always set the cost for being a woman: The price your family has to pay before another family will take you in.

Against this, we had the recommendations of the Justice Verma Committee report. Asked to frame laws that would protect women against rape and harassment, they pointed out that it would take much more than laws and bills to bring about equality. It was not that women required protection, the Committee members wrote; they required dignity, and respect, and most of all, equal space in all spheres of Indian life that the Constitution had promised us. Over the months, even as the patriarchy howled back, we saw enough men stand up for women’s rights, men who stood up because they wanted, in essence, a more equal world.

What the Verma Committee suggested women in India needed was not sops or handouts, or the stifling gag of paternalistic protection. Instead, they wrote, women must have the ability “to insist on total equality in relationships, both with society and the state”.

Many missed that part of the report, because as with land rights, we are not conditioned to imagine equality. Growing up in an unequal world, a deeply riven and unequal country, it is sometimes hard to imagine what freedom for women would mean. One way to try to imagine this freedom is to move away from the restricting straitjacket that pits men against women, so that the gain of one’s rights is always weighed against the loss of the other’s powers.

Instead, think of how gender functions in the real world: From gays and lesbians, to transgenders, to masculine women or feminine men, and all the glorious shades of gender ambiguity in between, gender is not an absolute so much as it is a spectrum, a rainbow coalition. In its poetry, in its most ancient myths, in its oldest stories, Indians have always acknowledged the fluidity of gender; it is only in our laws that we stick with the binaries of men and women.

Some years ago, the feminist Gloria Steinem suggested that the task before us was to imagine equality. That is hard to do, but it is also beguiling: An India where women owned half the land might also be a country where women walked and danced and loitered as freely on its streets as the men now do. An India where we saw gender as any one of several hues in the rainbow, rather than sticking with the rigid divisions of men (the owners) versus women (the owned), would not just be a healthier country. It would also be one that was true to its own roots, its own history, repeated from Kerala to the North-East of having many different ways of imagining how families might live, and of how men and women might be friends—even, finally, equals.

Tweets by @forbesindia
Freedom to Love: India Will Also Warm Up To Homosexuality
Freedom to die: When others decide how our lives should end