Freedom to Love: India Will Also Warm Up To Homosexuality 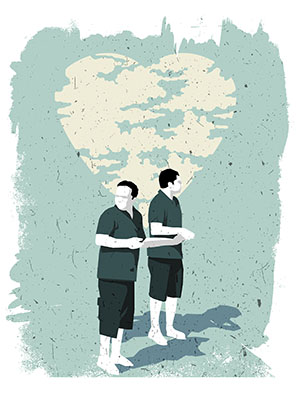 When my friend Aditya Advani came out to his mother in the early ’90s, she suggested they run a matrimonial ad in the Hindustan Times to find him a good husband. In 1993, when he took his partner Michael Tarr home to New Delhi from California, Aditya resisted going to a family wedding. “No one is ever going to come to my wedding,” he complained. His mother thought for a moment and said, “Why not? We could have a ceremony for you and Michael.” The family’s swamiji dedicated it to Ayyappa or Hariharaputra, son of the union between two male gods, Lord Vishnu and Lord Shiva. “I couldn’t believe my luck,” Aditya remembers. “Openly gay and married in my parents’ drawing room at the age of thirty. Right on schedule as a good Indian boy should be.”

Recently Aditya and Michael moved to New Delhi to raise their new twins. When friends wonder what that’s like, Aditya says it’s been great. India is such a child-friendly society. And the woman who comes to clean the house is perfectly happy not to have to deal with a memsahib.

Heterosexuality might be the default normal in India, but marriage (and children) is even more so. When I tried to get a modular kitchen designed for my apartment in Kolkata, the kitchen consultant told me, “Just come back any time with madam to approve the kitchen design.”

I explained patiently that there was no madam around and that I would be approving my own modular kitchen, cabinet colours and all. He nodded and said, “But we can wait a few days, if needed, for madam.”

When it finally dawned on him that there really was no madam at all, he was shocked. I don’t know what threw him more—that a man might approve a kitchen design, or that I lived alone or that a man who lived alone wanted a kitchen.

India might actually find it easier to adjust to being a society that tolerates same-sex marriage because at least it’s marriage. We understand marriage because it’s in our cultural DNA. It feeds into the Great Indian Preoccupation—seeing the children settled.

In the West, the LGBT rights movement has pretty much morphed into the marriage equality movement. At the Pride Parade in Manhattan this year I watched couple after couple walk past bearing their marital status like a flag of honour. One read “Just Married”. Another was the first couple to have been married in New York state. Marriage. Children. Pets. I almost expected the dancing boys on the Wells Fargo Bank float to start handing out mortgage applications for same-sex couples.

In India, the movement has until now focussed on the repeal of Section 377, the anti unnatural sex law, a Victorian hangover. But just because consensual sex between adults is decriminalised it does not mean homosexuality has been legalised.
Legalisation comes with actual rights and that will be the next real frontier.

The big question hanging over the yet-to-come Supreme Court ruling on Section 377 is not whether it will re-criminalise sodomy as much as whether the court will try and close the door on rights. The right to marriage is not just about organising the Big Fat Indian Gay Wedding. It comes with far more practical and prosaic considerations such as property, insurance, bank loans, surrogacy—opportunities that are often closed off to two men or women unrelated to each other.

The greatest individual freedom would be a society where these rights and opportunities were not tied to marriage. But that’s a pipe dream. So at DesiQ, a recent international conference for LGBT South Asians in San Francisco, a representative from the Humsafar Trust in Mumbai suggested the Special Marriage Act in India, meant for marriages across religions, could be amended to include same-sex marriage.

The Special Marriage Act and the Hindu Marriage Act, both framed almost 60 years ago, are fortuitously gender-neutral already. The framers of those acts were probably not thinking about our ancient traditions where, as mythologist Devdutt Pattanaik’s work has shown, gender is a spectrum and kings get pregnant and women turn into men and Hariharaputra is the son of Hari (Vishnu) and Hara (Shiva).The fact that our lawmakers left a gender loophole is really an amusing oversight, not foresight.

But let’s not look a gift loophole in the mouth. At the Jaipur Literature Festival earlier this year American author Andrew Solomon was asked about his family. He explained that his husband was the father of two children with lesbian friends in Minneapolis, he himself had a daughter with a close college friend in Texas, and he and his husband also have a son where he is the biological father while the surrogate was the lesbian mother of his husband’s two children in Minneapolis.

The audience, mostly Indian, burst out laughing but Solomon was really saying something quite profound. Our families take shapes that we could not have imagined, especially growing up in a society where we had thought it was not possible to be true to one’s gay identity and be a parent at the same time. That is not true anymore. And laws are changing all over the world to keep up with the ways we are re-jiggering the notion of what it means to have a family.

That change will come to India too eventually. It’s true that just having laws that happen to be same-sex-marriage-ready isn’t the same as having a society that’s ready for same-sex marriage.

But, as an activist friend says, just put it down to good karma. And don’t mess with it.

Tweets by @forbesindia
Pratap Bhanu Mehta: When Business Bats Against Itself
Freedom from Gender: Imagining Equality for Men and Women in India