Freedom to be a Child: Why A Happy and Carefree Childhood Is Important

From park swings to medical seats, the competition to outsmart others and squeeze through the system starts early 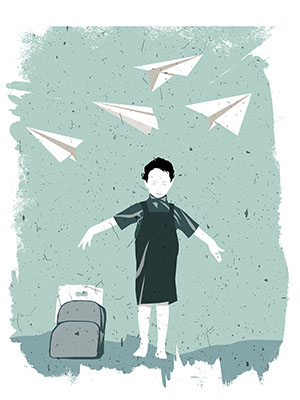 If child rights and welfare are established barometers of societal evolution and economic progress, India flounders in the doldrums. Sure, we have the Right to Education (RTE), the mid-day meal schemes, the ban on gender-selection, policies to stop child trafficking and child labour. But we also have the largest population of children and the highest child-mortality rates.

Amongst 400 million children, the competition starts early. After having my second baby, I was ousted from my private recovery room for someone with more ‘influence’. And it continues. From park swings to medical ‘seats’, the scrum is daunting.

My (admittedly contemplative) 12-year-old believes her most important right is to ‘education’. Her generation, being squeezed through the meat-grinder of the system, realises no childhood can be ‘carefree’ if you worry about sustaining a productive adulthood.

“India has known for a long, long time that there will be so many children to educate,” says writer and education consultant Meeta Sengupta. Even if, as MHRD data suggests, there are enough seats for every child in India, “the fact is India does not have enough good quality schools to meet the legitimate aspirations of children and their parents”.

For those on the economic fringes, the struggle usually results in gender-biased choices: Their boys attend better, often English-medium schools; the daughters’ aspirations are reduced to what can be achieved in the local vernacular.

Three years in, the RTE initiative struggles with basic infrastructure issues like building classrooms, teacher-student ratios and the recently blighted mid-day meal programmes. Despite increased budgets and a touted boost in enrolment, about 8 million children (mostly girls) still do not go to school, an unspecified number drop out and assessments indicate that learning and literacy are far below par.

You’d hope it’s better in private schools but even here, ‘getting in’ becomes about ‘gaming the system’. “Marks are a proxy for merit, though it is possible to acquire [marks] without real understanding or the tools for analysing anything outside prescribed textbooks,” Sengupta says. “The single point focus on exams uses stress as a tool to motivate: ‘A goal. OMG, how do I get there—hyperventilate—focus—breathe…’ No time to explore, discover, follow interests…”

So far as play is concerned, most of us were lucky enough to grow up in benevolent neglect, left mostly to our own devices within close-knit neighbourhoods. Such unstructured freedom now belongs to nostalgia. There is more traffic, fewer children without ‘schedules’. The casual groping or cat-calling that occasionally punctured my childhood idyll seems less noxious against the current stories of faceless, possibly malevolent strangers. I want my daughters to be protected from that sort of distress. So we organise playdates. We escort the children everywhere.

Giving my children the freedom to remain children longer means stunting their independence.

Money Changes Childhoods
Unlike their poorer or rural contemporaries, most urban children of a certain socio-economic bracket are growing into a world where families are shrinking, incomes rising and juniors are regarded as very influential consumers. Some of this conspicuous consumption comes packaged as ‘educational’ accoutrements. Pre-teens with smartTech are ubiquitous. It connects them to the outside world, their parents reason, because the world outside is not good enough for our children.

In that world outside, in India, more than 17 million children work an average of 21 hours a week, according to recent CRY statistics. Despite a complete ban on child labour—including as domestics—extreme poverty edges children into minimum-wage employment. A Delhi Police advertisement (retracted after extreme criticism), featuring a young boy and exhorting the public to ‘help him learn to chop an onion, before he learns to chop a head’, is only indicative of a general insensitivity towards poor children.

But for a small percentage, within the reach of NGOs, childhood may actually be better than their parents’. The Angel Express Foundation in Mumbai, for instance, connects affluent, educated adults with underprivileged school children: Encouraging, tutoring and bribing them (with treats, toys, food) to stay in school. “The children I work with seem far more happy and carefree [than children of a more privileged background]. The pressure and stresses of performance, of doing too many things, is missing from their lives,” says AEF founder Anubha Sharma.

The Foundation for Mother and Child Health (FMCH) runs nutrition and support programmes and a clinic, also in Mumbai. Executive Director Piyasree Mukherjee says there is no room for the kind of clucking and fussing more privileged parents are prone to but “safety, food and education are given high importance”. Left to their own devices, the children play outdoors, while “the older ones often play at a local video parlour. The biggest entertainer of course, is TV”.

At nonprofit educational media organisation Sesame Workshop India, MD Sashwati Banerjee consciously adheres to self-imposed guidelines: “Sodas, junk foods are not allowed, neither are promotions of violence or discrimination [like fairness creams]. We have succeeded for over 40 years in keeping Sesame Street a safe place for children, and we don’t see it changing any time soon.”

The Bad News, The Good News
With a determined optimism, this may be the beginning of A Good Time To Be A Child In India. In urban areas, for children with learning disabilities and other developmental issues, there are more avenues for diagnosis and support. Every day, the discussion on children’s rights, the rights of girls, gains more traction, more facets and more column inches. Banerjee says, “Whether providing access to preschool education where little exists, tackling childhood obesity, fostering respect and understanding among children in areas of conflict, we are committed to helping all children reach their highest potential.”
Sharma sees changing attitudes first hand. “There are families where the kids are treated quite harshly,” she says, but also “families that create a safe environment for their children, treat them with love. The children, in turn, reciprocate.”

Freedom for a child is best defined as the acknowledgement of his or her potential and the ability to achieve it. The guarantee of security best enables the necessary childhood freedoms: To learn, play and grow gradually to shoulder adult responsibilities. Amongst parents and those dedicated to children, you can see the efforts to provide a dome of security, against daunting odds, where a child can enjoy the freedom of childhood. The odds include a government that is overwhelmed, at best, by the logistics of tackling the basic needs of its most vulnerable population and, at worst, by a lack of political will and funds misappropriation.

It is a cliché, but it will take a village—a village the span of this country.

Tweets by @forbesindia
Jagdeep Chhokar: Why Does Our Political Process Produce Rotten Leaders?
Swati Piramal: How to Make India a World Leader in Low-Cost Health Care