In new-age patisseries, get your cake and learn the recipe too 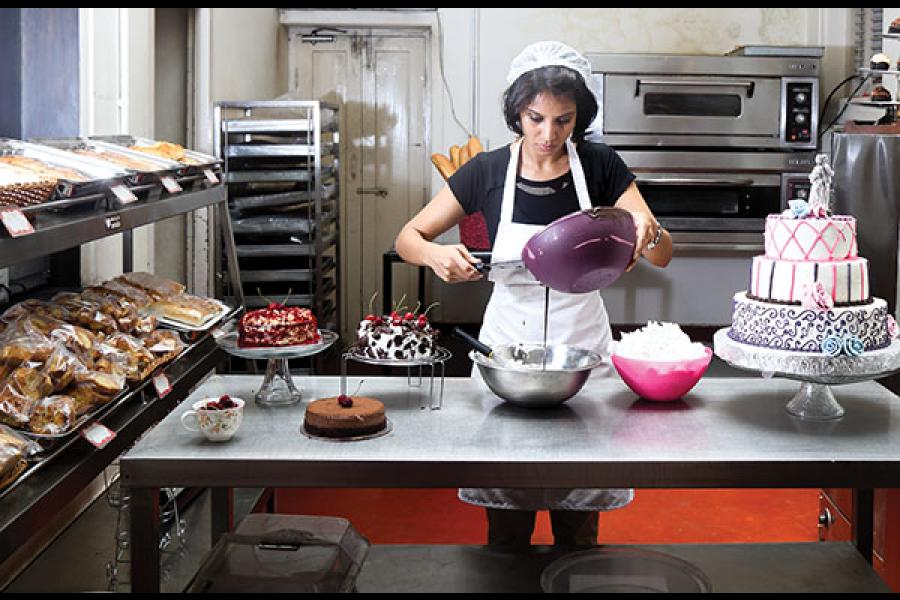 Image: BMXIMAGE
“The environment is very professional and all the equipment can get a little intimidating for a first-timer,” says Swetha Kurada, chef and founder of Desserted Studio in Bengaluru

Remember the time, not too long ago, when mothers would take great pains to make vanilla or chocolate sponge cakes in a pressure cooker on special occasions? Or when cookies remained confined to the pages of foreign recipe books, and rarely made an appearance in real?

This was a time when learning how to bake—even cook, for that matter—was largely an all-woman afternoon affair, conducted in the kitchens and living rooms of experts. Teachers were enterprising women who taught skills that couldn’t be learnt elsewhere; students were enthusiastic women of all ages: Would-be brides, young mothers, middle-aged home-makers or budding entrepreneurs.

Then came the cookery shows on television, with Sanjeev Kapoor redefining the concept of matinee idol. There were others too: The immensely popular Tarla Dalal, with her traditional staples, and Jiggs Kalra, with his touch of the exotic, for instance. But baking remained in its rarefied space.

A couple of decades later, though, baking seems to be having its time in the sun. Or the oven. The first sign of the changing times was perhaps the mushrooming of new-age bakeries and patisseries in big cities. A far cry from the traditional bakeries selling mawa cakes and fresh bread from behind creaky counters, these establishments brought the exotic stuff to the masses. And, just like that, cup-cakes became a household word.

Taking this a big step forward are a bunch of professionals—with plush culinary studios, state-of-the-art equipment and foreign degrees—who not only harbour a passion for baking, but also for teaching. Students, too, are no longer just young brides or experimenting mothers, but enthusiasts cutting across gender, age, professional and social backgrounds.

“I was a teenager when I first attended Tarla Dalal’s cooking class nearly three decades ago,” says Nivedita Paghdiwalla, a reproductive biologist in Mumbai. “All the participants were aged between 19 and 25, and we all had a great time. She demonstrated how to bake a cake and prepare desserts like mousse.” Today, Paghdiwalla is a regular student at the culinary studio of Pooja Dhingra—pastry chef and owner of Le 15 Patisserie—in Lower Parel, Mumbai. Perfecting the techniques of making macaroons is what takes up Paghdiwalla’s time now.

“Classes have come a long way now,” she says. “Back then, there were hardly any moulds available and procuring chocolates or frozen fruit to put in cakes was a task. The equipment was simple. I remember there used to be a Bajaj oven in the kitchen where she [Dalal] took her classes, and it had hot spots that we were instructed not to touch. Recipes too were simple. We probably didn’t even have a baking tray! But now when someone mentions baking tray, people ask about its size specifications and material too. Everything has evolved: The ingredients, the equipment and the finesse.”

The internet, numerous lifestyle channels on television, and the ability and money to frequently travel abroad has done wonders to what students know and want. They also have evolved tastes and sensibilities.  Demand, consequently, is rising.

Swati Dandotiya, a recent graduate from NIFT, Bengaluru, and a student from Swetha Kurada’s Desserted Studio at Vasanth Nagar in Bengaluru, says one-on-one teaching is something that is not possible with TV shows and websites. “In the first class itself, we were taught the tips and tricks of tempering chocolate and whipping cream in a very fun and easy way,” she says.

“We usually put up a board, saying we offer classes on basic and advanced baking,” says Kurada, chef and founder of Desserted Studio. “But we had to take it down as the number of requests to repeat classes was becoming difficult to manage.”

Kurada had launched a studio alongside her patisserie, which she opened three years ago, and has conducted her basics-of-baking class—priced at Rs 2,000 onwards—eight times in the last six months. The sudden spike in demand has surprised her. “We get at least 40 inquiries a month.” The demand has, in fact, prompted Kurada to start a six-month to one-year culinary certificate course, which begins in July-August. 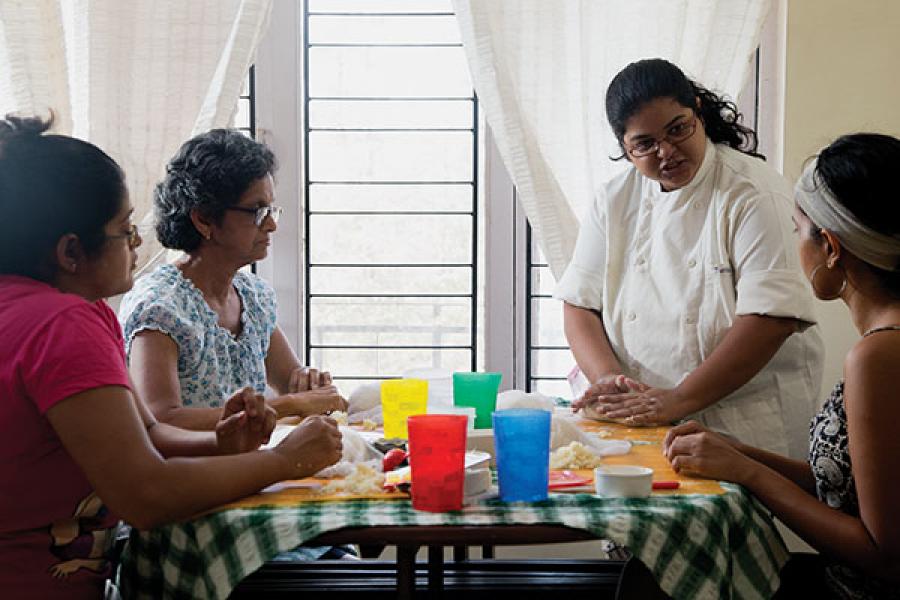 Le 15’s Dhingra, who had started her patisserie in 2010, got into teaching by holding a few workshops. But the rising number of students made her set up a separate studio in 2012. “Initially, I started conducting classes on a smaller scale, but there was such a rush for these classes that they were actually doing better than the sales. I was paying my rent for the central kitchen with my earnings from the classes. We then started a culinary studio where chefs from various places teach some of their recipes,” says Dhingra. “One of our regular attendees was a lady who would fly down from Hyderabad just for these classes.” Priced between Rs 2,500 and Rs 3,500, the classes include savoury recipes, although the baking variant remains the most popular.

Not remaining confined to Mumbai, Dhingra conducts workshops in Delhi, Hyderabad and Bengaluru. Most of these see packed houses, with a recent workshop in Bengaluru drawing 100 participants.

Private corporations too seem to have sat up at the concept of baking workshops. Venkatesh Raghu, co-founder of three-year-old Amande Patisserie in Thyagaraja Nagar in Bengaluru, conducts workshops for Rs 2,000 per head. “Many MNCs and IT companies have been booking our baking workshops for employees as they think it is a good team-building exercise,” he says.

“We are associated with a firm that organises off-site trips and activities for corporations, and a baking demo or workshop is a very popular choice among them,” says Kurada. “The size of the group ranges from 15 to 45 people and the price of the package is Rs 35,000-40,000 onwards.”

There are other entrepreneurs who have adopted bits of both worlds: Up to date teaching techniques and equipment, but in the comfort of a house. Mumbai-based Blue Bulb conducts bread- and cupcake-making workshops, and carries all the required ingredients and equipment—even an oven—to the client’s house. Regan Rodricks, co-founder of Blue Bulb, says, “We started the bread-baking workshop around two years ago. Within six months, we started a cupcake version too. Earlier, such workshops were held by home bakers in their houses. Getting access to all the ingredients and an oven would also increase costs.” Blue Bulb’s workshops—which often count men among the students—are priced from Rs 750 per person and are conducted seven times a month. They are now being held in Pune as well.

Earnings from these classes, however, are not significant for everyone. While Kurada says they constitute less than 10 percent of her total revenue, Raghu says the figure is below 5 percent for him.

But, there is optimism. “I can see the classes becoming a significant revenue source in the next three years, contributing around 30 to 40 percent to the total revenue,” says Kurada. Raghu, too, concedes that since the investment for these workshops is negligible, returns are already twice the investment.

So where do all these hip and hyped baking workshops leave the old-fashioned home classes? In their own phase of evolution, it turns out. Home bakers have upped their game by including international desserts in their repertoire. Manju Mathews, who has been conducting classes at her Bengaluru home for 13 years, says, “I teach French desserts like macaroons too in my classes and will be including Middle Eastern desserts like baklava and basbousa soon.” She charges Rs 1,000 per class for the demo version, and Rs 3,000 for the hands-on version. “Earlier a lot of newly married women would attend my classes. Now I teach women who want to start a home baking business of their own and a lot of men too, including some foreigners,” she says.

The demand for baked goodies and baking classes seems here to stay. It is yet to be seen, however, what the impact of international culinary institutes such as the Malaysia-based Academy of Pastry Arts (already in India) and the famed Le Cordon Bleu of Paris (planning to launch here) will be on these small studios.

We know what they say of the proof of puddings.

Tweets by @forbesindia
The social network that gets you a ride
How to make money honestly, Jessica Alba style