In search of the Harappan DNA

In Rakhigarhi, Haryana, archaeologists are determined to give a face to the Harappan civilisation. They have the skeletons. They now need the DNA 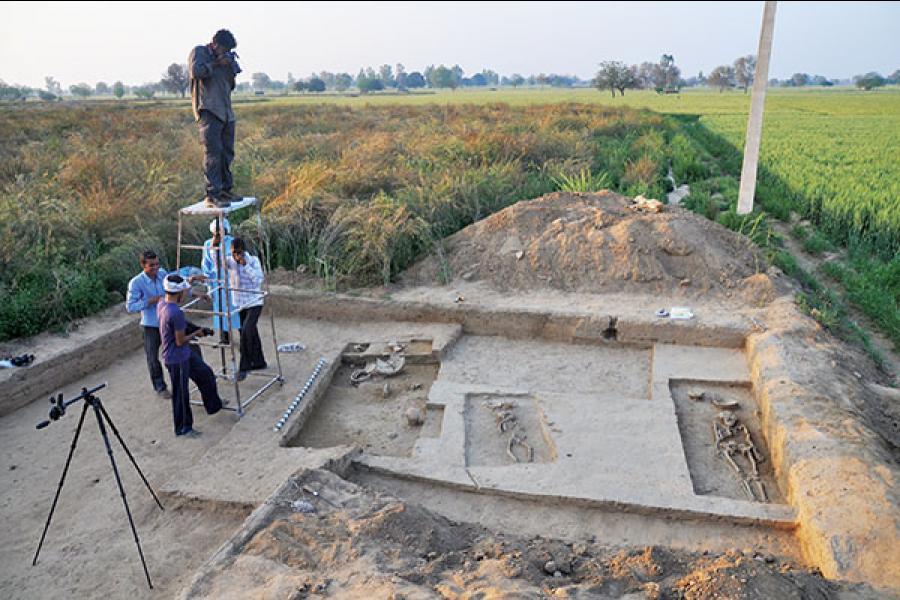 Image: Dr. Vasant Shinde / Deccan College
The burial site in Hisar from where four skeletons dating back to the Harappan civilisation were unearthed

Vasant Shinde is hunting for DNA. Human DNA. And he hopes to extract it from four nearly-4,500-year-old skeletons that he dug up at Rakhigarhi village in Haryana’s Hisar district this January.

Dr Shinde, 59, is vice chancellor of the Deccan College Post-Graduate and Research Institute, a deemed university in Pune, and he is heading the excavation in Rakhigarhi. There is a quiet but tenacious determination in his pursuit of genetic material. The twists of the double helix hold a secret: The ancestry of the inhabitants of one of the world’s oldest known civilisations, the Harappan civilisation (3300-1900 BCE approximately).

To the layperson, Harappa is two iconic images: The ‘Dancing Girl’ bronze statue and the stone figure of the bearded ‘Priest-King.’

Shinde is determined to paint a far more detailed picture. Were the people native to the Indian subcontinent? Were they Dravidians or did they hail from Central Asia? What did they look like? These are just some of the questions that DNA can answer.

DNA isn’t all that’s being studied, however; Rakhigarhi is the biggest Harappan site unearthed to date, a mega-city, spread across 350 hectares and over nine mounds, larger than Mohenjo-daro (300 hectares) and Harappa (150 hectares) in Pakistan. The mounds—they resemble hillocks—or tila as the locals call them, hold enough information to keep scientists  across disciplines busy for the next century. Some, like mound #4, are 22 metres deep. A five-month dig since January has already yielded 10 trunks and more than 30 burlap sacks of animal bones, pottery shards and goblets, toys and terracotta figurines, including one of a collared dog, beads and bangles and other remnants of a once-thriving society.  And from mound #7, over January and February, the team excavated four skeletons, a woman, two men and a child. The perfect specimens are what makes Shinde excited. From them, he hopes to extract DNA.

The oldest human DNA to be extracted and sequenced comes from a 400,000-year-old thigh bone dug up from an underground cave called Sima de los Huesos, or the ‘Pit of Bones’, in Spain. But, so far, no one has been able to extract uncontaminated DNA from Harappan bones.

“Before us,” Shinde says, “a team tried to get DNA in the early 2000s in Harappa, but failed. We tried to extract DNA at Farmana [in Rohtak district, Haryana], but failed. We made mistakes. The skeletons were put on display and we allowed the media and other people to come and see them. And because of this, the genetic material got contaminated.”

Contamination is not the only hazard; weather conditions in South Asia make it difficult for scientists to find and amplify ancient genetic material. (Amplification is an artificial way of increasing and replicating a strand of DNA.) Benjamin Valentine, a post-doctorate researcher in anthropology at Dartmouth College, New Hampshire, USA, explains: “It’s a matter of preservation conditions in monsoon climates. The constant cycle of wet and dry at high temperatures degrades any organic material.”

As a PhD student in the University of Florida, Valentine had led a study that analysed the inorganic content of teeth from the skeletons at Farmana and Harappa to learn more about burial patterns.

His findings (published in 2015) suggest that the people in both the ancient sites were first-generation migrants. “Understanding preservation [of DNA] in archaeological remains isn’t an exact science,” he says. It’s hard to predict precisely how factors like temperature, moisture and acidity in the soil can affect organic material. “But everyone remains hopeful for two reasons: You never quite know how differences in micro-climate in particular soils are going to change preservation factors; and techniques for recovering DNA are improving. It is a rapidly developing field.”

At the start of Shinde’s career in 1979, such possibilities were in the realm of science fiction. But 35 years later, his ambition and hope is propelled by the potential and increasing probability of success in this field The failure in Farmana was a lesson; much before the Rakhigarhi discovery, he had reached out to Dr Dong Hoon Shin, a forensic scientist and professor at Seoul National University College of Medicine, who has, in the past, worked on 300- to 500-year-old mummies in South Korea. Together, they devised a protocol that the team would follow should they unearth more skeletons
in future. 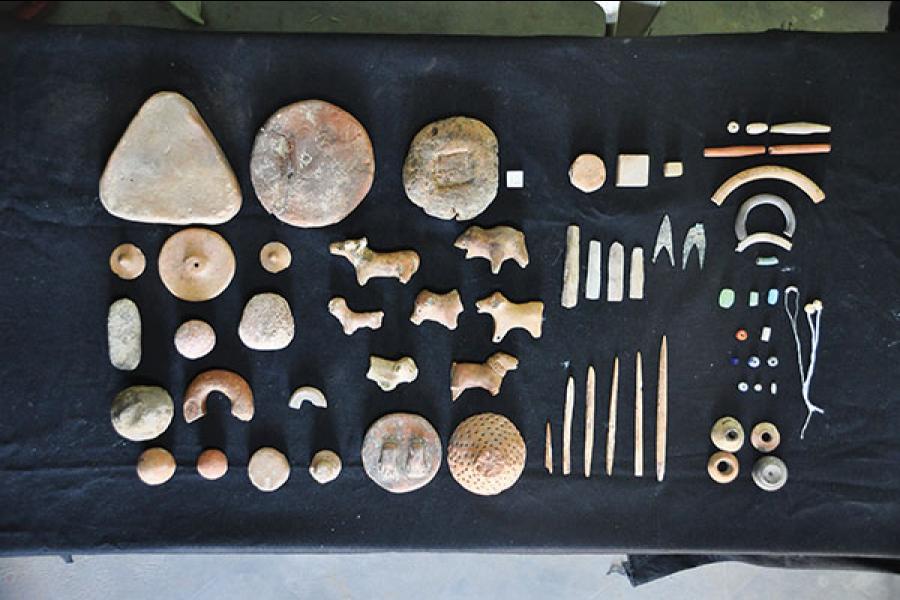 Image: Dr. Vasant Shinde / Deccan College
From the Harappan site in Hisar, the archaeologists also found beads, bangles, jewellery, and what appear to be tools

The number of people who handled the bones was limited to the core team. “We wore scrubs and gloves and masks,” says 29-year-old Pranjali Waghmare, a doctoral student at the Deccan College who specialises in burials. Rakhigarhi was her first experience on a dig, and probably will be the biggest in her career. “We even gave samples of our DNA to test for contamination,” adds Yogesh Yadav, another PhD student, who was part of the team. They’ve been digging at Rakhigarhi since January and returned to Pune (with the skeletons) only towards the end of May.

At the site, Waghmare had dusted, dismantled and carefully packed every bone into six transparent plastic boxes. At her college’s modest lab, she now has to piece it back together and scan the skeleton. (The Deccan College team is looking to tie up with a hospital for the scan.)

This is in preparation for Dr Shin and the team from South Korea, who will be coming to Pune later this year, to work on another thread: What did these Rakhigarhi people look like?

Shin’s team specialises in craniofacial reconstruction (CFR), a technique used to “rebuild the living facial appearance onto a skull in order to recognise an individual”. He has reconstructed the face of a 400-year-old mummy found in South Korea from a CT scan of the skull and a 3D printing process called stereolithography.

CFR is now often used in forensic investigations and archaeology. Two years ago, scientists from Scotland’s Dundee University used the technology to recreate King Richard III’s face after his skeleton was unearthed from a car park in Leicester. The end result was a 3D model of a wrinkle-free face of the 15th century king whom Shakespeare vilified as the man who murdered his brother and nephews. It’s described in one report as having a “slightly arched nose and prominent chin”.

The South Korean team will attempt a similar CFR in India as the facial bones of one male adult are intact. He appears to be over 30 years old but more tests are required to confirm his age.

“Seeing the reconstructed Harappan person’s face is the main event of this project with Dr Shinde. As far as I know, except for the faces of some figurines from Harappan sites, this is the first time ever that we will be able to scientifically reconstruct the face,” Shin tells Forbes India in an email interview.

But as Valentine points out, it will be difficult to recreate a phenotype, a visible expression or physical manifestation of the result of our genes combined with environmental influences. A phenotype includes not just physical appearance but also behaviour and metabolism.

That said, there are a list of traits that ancient DNA can help narrow down such as skin pigmentation, the colour of the Harappan individual’s hair and eyes.

“It could be done, but it’s not easy,” writes Shin, “because the information needed will have to come from nuclear DNA. I am not sure if we can get some crucial clues for facial reconstruction by DNA analysis. Anyway, we will try. Let’s see.”
(CFR does not require DNA.)

The present offers clues too, as Shinde says: “The villagers in Rakhigarhi believe that they are descendants of the Harappan people. Even after thousands of years, there are similarities in the two cultures. The houses in present-day Rakhigarhi, for example, have the same architectural features (like courtyards) as the ones we’ve excavated. DNA would give us a definitive answer,” What if the DNA hunt turns up negative? “There’s always Plan B,” says Shinde, with equanimity that would put a Buddhist monk to shame. “I’m looking for parasite eggs.”

Often found in the pelvic bones of skeletons and the soil surrounding them, ancient parasite eggs can tell a lot about a people and their culture. In each historic period and geological region, parasitism shows different patterns that can be co-related to the people living there. Parasite eggs can throw up unpleasant information. An analysis by archaeologists from the University of Basel has shown that people from an Iron Age settlement in present day Switzerland lived with their livestock and used open pits as latrines. “You can get information on people’s hygiene habits, disease and even their dietary pattern,” says Shin, who will be working with Shinde on this part of the study, too.

The Deccan College team radiates restrained excitement and urgency. With so many strands of inquiry, the Rakhigarhi site is a goldmine of information. It may change the existing narrative of the Harappan civilisation.

But first, they need to find that DNA.

Forbes India will follow this story and bring you updates, in the magazine or online.