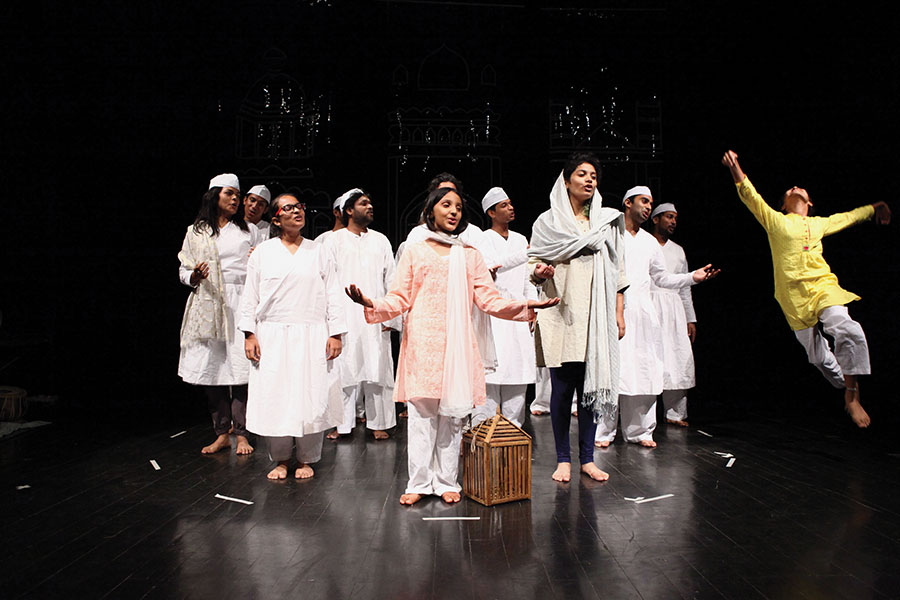 Shaili Sathyu’s Gillo commissioned Atul Tiwari to direct Taoos Chaman Ki Myna
Image Courtesy: Gillo Repertory
In just about eight years, one name has arguably become synonymous with theatre for young audiences (TYA) in Mumbai—that of Gillo Repertory. The prime mover behind the group’s unique trajectory—from hesitant early steps, to becoming an institution with cultural heft of its own—has been its intrepid artistic director, Shaili Sathyu, to whom theatre direction happened quite by chance.

Circa 2003, her calling was to write books for children. To educate and sensitise herself to their needs, she underwent a teacher training course, followed by a stint with a school in Mumbai, while travelling extensively to research channels that reached out to children—attending book fairs, and meeting puppeteers, writers and publishers. This early grounding prepared her for a future role that she hadn’t yet envisaged for herself.

The daughter of film and theatre director MS Sathyu and screenwriter Shama Zaidi, Sathyu had certainly been involved in many aspects of theatre-making as a member of the Indian People’s Theatre Association (IPTA). But directing her first play, Barso Ram Dhadake Se, took some coaxing by her cohorts. 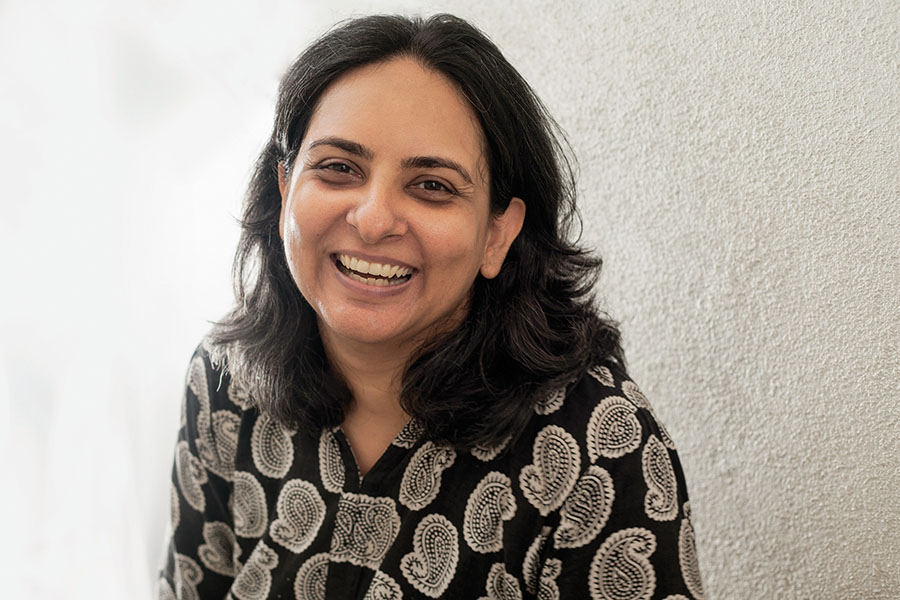 “ “We have consciously looked at building connections with other practitioners all over India.”
Shaili Sathyu, founder, Gillo Repertory


Later that year, 2009, she was also an attendee at a workshop for TYA directors in Germany. “That was a turning point. I was the greenhorn, with just one play under my belt; everyone else was doing this professionally and thriving,” says Sathyu. When she returned, thoroughly bitten by the bug, it wasn’t long before she set up Gillo—with the mascot of a squirrel, called gilahari in Hindi—which was conceived as an all-round media company, but theatre for children was to become its unassailable mainstay.

The 43-year-old Sathyu, born in the same month former Prime Minister Indira Gandhi enforced the Emergency in 1975, spent her childhood in an arts-infused haze in Mumbai, slowly being indoctrinated into an amateur theatre scene her Left-leaning parents were actively involved in. “I hung around rehearsals, and slept in the back of my father’s Fiat Safari during late shows,” she remembers. One of her earliest theatre memories is of actor Sulbha Arya, as her character is dragged off the stage at Prithvi Theatre during a scene from Sarveshwar Dayal Saxena’s political satire, Bakri, one of IPTA’s superhit plays. “The way she screamed in a darkened auditorium was so real and immediate,” she says. The apparent complicity of an audience that did nothing to save a hapless woman stood out in her young mind.

A happier memory is linked to a production of Bertolt Brecht’s Caucasian Chalk Circle, which starred Shabana Azmi. Sathyu and other children in a crowd scene, in an unscripted detour, had to be chased around the stage and caught before the scene could segue into the next. These were plays directed by her father. In 1984, she was cast as a grandmother in her first play, Munshi Premchand’s Idgah, directed by Madhu Malti for IPTA Balmanch (the organisation’s children’s theatre wing). In the 1980s, IPTA was undergoing a crisis of faith, the grassroots engagement of its illustrious past having eroded over time. Its armchair posturing was something Sathyu had begun to resent, which led to a period of disillusionment during her college years, although she did return to the fold, staying on till Gillo happened.

Those formative influences resulted in a worldview that crystallised on stage through her plays. Social egalitarianism, a progressive feminist outlook, and an optimistic belief in the joy of childhood discoveries, while eschewing the caricatures and clichés that riddle most works for children, are hallmarks of Sathyu’s oeuvre.

In Barso Ram Dhadake Se, families in a chawl from different states were portrayed without the use of accents and stereotypes. In her acclaimed production of Mahasweta Devi’s Kyun Kyun Ladki, a caste-inflected scene in which a parcel of half-eaten food is thrown at a girl who later refuses to eat it, raised hackles with parents. “I wanted to show the reality of a child in a different context, so that children in the audience could raise questions about the otherness that comes to us in so many different ways,” she says.

That early censure of parents, who were the decision makers in their children’s lives, made her more careful of the nuances her actors brought to sensitive subjects. Sathyu soon discovered that classic plays for children were often prescriptive and outdated. “The world built around children by adults was too black-and-white, without leaving space for greys,” she says. Over the years, she has unearthed contemporary texts for young people, many drawn from literary sources, and adapted them for stage. Although the universe of Gillo’s plays is not necessarily non-conforming, and has a feel-good allure of its own, Sathyu brings in “the greys” by not imposing her own interpretations on audiences, and leaving the plays open-ended.

Sathyu’s success with Gillo would not have been possible without the team of able stage managers and technicians she has assembled, and the actors that have remained loyal for years. Calling their group a ‘repertory’ was an aspirational choice, although an experiment with keeping a few actors on monthly stipends for a whole year proved untenable. New actors have to sign a one-year agreement, which runs into six pages, although this is done purely on good faith. Gillo’s year-long itinerary, that doesn’t depend on summer dates doled out by Prithvi Theatre or the NCPA during school vacations, is certainly incentive enough for actors looking to work regularly, but the group’s sensibilities and convictions and distinctive specialisation also find ample takers.

It’s perhaps the only group that works so consistently in the TYA space. Gillo gatherings are usually full of bonhomie and good humour. At its largest, the group was 30-strong. Actors usually stay on for two to three years, on an average. Financial systems—meticulous accounting, streamlined cash flow and good old fashioned thrift—allow the group to function like a well-oiled machine, and the team’s calendar is impeccably drawn out—both of which Sathyu credits to her years as IPTA’s general secretary. Gillo hasn’t been the recipient of institutional funding, partly because Sathyu refuses to align her work to the outlines dictated by grants, but revenues generated from shows, workshops, festivals and donations have kept them afloat, although this has involved an assiduous micro-managing of funds. From December, it enters the tenth year of its existence.

The journey forward has seen Gillo attempt to develop a second rung of directors through a pilot mentorship programme. “We wanted to support actors who saw themselves as practitioners but weren’t articulating their skills,” she says. Sathyu has also sporadically commissioned outside directors to held Gillo’s production—like Timira Gupta’s A Silly Story of Bondapalli, and Atul Tiwari’s Taoos Chaman Ki Myna, one of the rare Gillo plays that has found crossover adult audiences. “The story concepts are given by us, and are aligned with the philosophy of the group,” says Sathyu, who occasionally raises questions during rehearsals but never imposes her vision on their work.

Tiwari’s whimsical play, a musical, is based on a story by Naiyer Masud, and is set in old Lucknow during the times of the decadent Wajid Ali Shah, circa 1856, when his kingdom was annexed by the British. It evokes a culturally rich world with a breathtaking plurality. A play that Sathyu is particularly fond of, which didn’t quite take off, was She-He-Shey, her interpretation of Rabindranath Tagore’s Shey, a compilation of his letters to his granddaughter. It is a work of rare maturity that packs in much profundity in easily digestible nuggets. In 2013, staging the play at Shantiniketan, where Tagore established his unconventional education system at Visva-Bharati University close to Kolkata, was a memorable experience. “It was a play that could’ve done the runs of festivals, but we couldn’t hold on to its original cast for too long,” she says. In contrast, her Hanuman ki Ramayan, based on a mythological book by Devdutt Pattanaik, is still going strong, having recently completed a whopping 100 shows all over India.

Gillo finds itself at the forefront of all recent trends that have emerged in the world of TYA in India. For instance, children’s theatre in India is no longer monolithic, and practitioners have started focusing on creating distinct works for babies or toddlers (or early years audiences), as well as older children and adolescents. Sathyu’s latest directorial venture, Chidiya Udd, was Gillo’s first play for children aged between one and four. Gillo was also one of the earliest Indian members of ASSITEJ—the French acronym for International Association of Theatre for Children and Young People—a networking body that links thousands of theatres, organisations and individuals through national centres in 100 countries. Under ASSITEJ, Sathyu has been associated with the fledgling children’s theatre festival, Tifli, both as a curator and a festival director.

When Gillo started out, the group found little support in the theatre eco-system they were stepping into. Now, there is a nationwide conglomeration of groups eager to support one another. “We have consciously looked at building connections with other practitioners all over India,” says Sathyu. A testament to this freshly minted support base was a recent bus tour the group organised, called Gillo on the Go, which took a team of 15 across Karnataka over two weeks last November, making stopovers at schools in remote locations, and regaling children with stories and performances. “Almost 80 percent of the funds for this came from theatrewallahs,” she says. In a way, it hearteningly sums up her own journey in an unforgiving field that ultimately pays dividends to those who persevere.

Tweets by @forbesindia
GST implementation: Good, but not yet simple
Beyond Ecommerce: Is it the era of products?