Reclaiming pole position: Can Lotus do it?

Having been lapped by its rivals for decades, the famed British automaker is on a mission to regain supercar supremacy 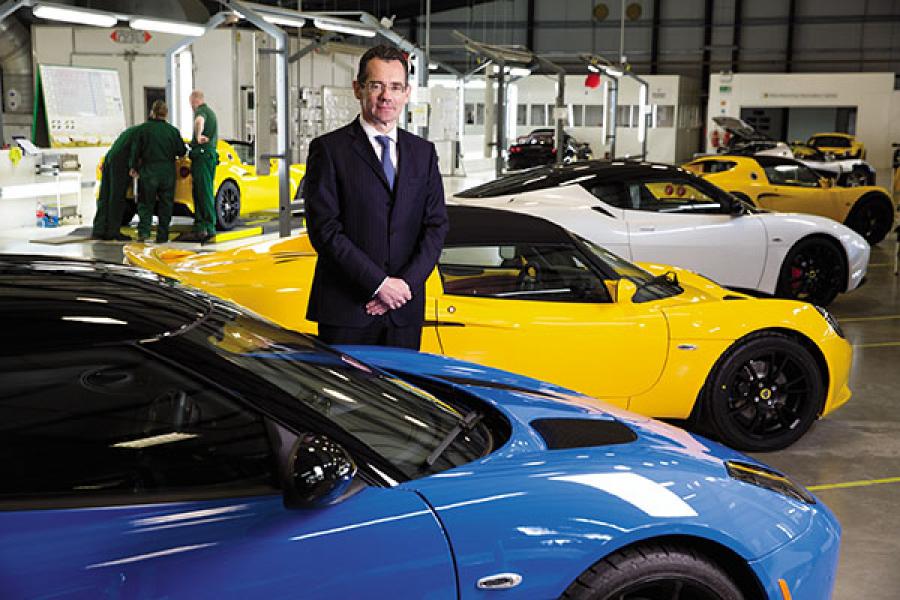 Image: Michael Austen
Fast track: New Lotus CEO Jean-Marc Gales (at the headquarters in Norfolk, England) expects the company to be profitable by 2016

Jean-Marc Gales, the newly recruited CEO of Group Lotus Plc, arrived in Norfolk, England, last May with a simple but daunting mission: To restore the once mighty British automaker as a supercar superpower.

For the past few decades, Lotus has been seriously stalled while its main rivals—Ferrari, Porsche, McLaren—have shot past them in auto racing, production vehicles, engineering services and profit. The past two years alone, Lotus has seen nearly $400 million in losses.

The 52-year-old Gales began his career leading Volkswagen fleet sales, followed by a stint managing Mercedes global marketing before he claimed the presidency of Peugeot in 2009. An acute technocrat steeped in the hard business of selling large numbers of vehicles, Gales has a surprising sense for the entrepreneurial at midcareer. And apparently a fearless heart.

Walking the Lotus facility last May, Gales performed combat triage, asking his engineers for products to execute and market within a year. His goal: To unveil the next generation of Lotus vehicles at the Geneva auto show in March.

With the engineers revving, Gales shook the financials. “It required painful decisions,” he admits. “It does not take 1,250 employees to produce 1,296 cars—an unsustainable condition.” He let go of 25 percent of the workforce.

Gales then put on his salesman’s hat. “The dealer network was extremely spotty. We had no dealer in Paris, no dealer in London, no dealer in Cannes or Milan, Abu Dhabi—no dealers where there are people with the money to buy our cars.”

He signed up 25 new dealers and by the end of the year will have another 50. Voting with their own money, dealers have agreed to buy vehicles and spare parts for cash, and self-fund the build-out of their dealerships, boosting Lotus’ cash flow.

Why are dealers willing to put up cash for a brand few people beyond sports car enthusiasts recognise or understand? A brand that has swayed from one financial disaster to another most of its existence? The power of mythology, the promise of new products, a changing regulatory landscape and a no-nonsense CEO.

Colin Chapman founded the company in 1952, and by 1963 Lotus had soundly beaten Ferrari, Porsche, Cooper and BRM to secure the first of its six Formula One World Drivers and seven constructors’ championships. Lotus also brought rear-engine design to the Indy 500, forever changing American motor sports.

Away from the track, Lotus developed innovative but quirky sports cars built on the principles of Colin Chapman: Simplify, then make it lighter. Always diminutive, and with rare exception powered by engines first from Ford, then GM and now Toyota, Lotus cars were all about brain wave steering and handling.

Despite some renown in the late 70s with the Lotus Esprit—James Bond’s amphibious vehicle in The Spy Who Loved Me—by 1982 the company was selling only a few hundred cars a year and was propped up by an IP agreement with Toyota made not long before Chapman’s death at age 54. Without the founding entrepreneur guiding the company, Lotus faded fast.  After seven years of ownership, GM sold its stake in 1993. In do-or-die fashion, Lotus developed Elise, the first production car built of bonded aluminum. A form of industrial origami, the process results in strong, lightweight cars.

Elise was a lightning bolt 20 years ago, so stunning that Ford engaged Lotus to develop the vertical horizontal (VH) architecture that underpins all Aston Martins. But until now, Lotus lacked the resources to mutate its own car, the mid-engine Evora, into a range of products. Prior to Gales there was another bold attempt to revive the company, but it quickly failed. In 2010, Lotus’ Malaysian parent company, Proton, appointed former Red Bull and Ferrari executive Dany Bahar as CEO. Bahar recruited a Mercedes-AMG powertrain engineer and designers from Ferrari. A flashy marketing executive accustomed to Red Bull’s outsize marketing budgets, Bahar had a plan long on bravado but short of achievable goals. His tenure ended in 2012 with acrimony and a flurry of legal battles. Soon after Proton was absorbed by its Malaysian rival, DRB-HICOM. “The financial situation was dire for several years,” Gales admits, “with losses of $255 million in 2012–13 and $108 million in 2013–14”.

Giving cheer to sports car purists, Gales is adamant that Lotus will remain a rare analogue holdout in a world of computer-controlled supercars that defy the laws of physics. Like Elise before it, the Evora engages the driver in an intimate conversation between car and road. Behind the wheel, any cyclist or skier will quickly understand Evora’s supple yet tenacious handling.

Though Gales is coy about the vehicles he’ll announce in Geneva, expect to see an Evora that’s lighter and more powerful. Gales claims that Lotus has also reduced build costs by 10 percent. “A break-even point depends upon many variables, but we definitely have the intention of being profitable by producing and selling over 3,000 cars per year in 2016,” Gales says.

To boost sales volumes, the new Evora—which won’t be released in the US until late 2015—might become the basis of a new coupelike CUV. More radical still, there could be a mid-front-engine, rear-drive four-door sedan, though any such car will be years away. With multiple flavours of Evora, a CUV and a smattering of hyper-Lotuses for private racing clubs like Thermal in Palm Springs, Gales is confident he can lift Lotus’ global sales to 10,000 by 2018.

When asked why a former president of Peugeot would move to Norfolk to run an advanced engineering firm that also crafts exotically simple sports cars, Gales is clear: “For the challenge,” he says. “I see a huge amount of potential for the company, and I know we can realise this potential. Also, I have always loved Lotus, ever since I was a child and my father took me to the Lotus dealer in Luxembourg. I still have the brochures from that visit.”