Splendour in the glass: Billionaire Vik's quest to make a superlative wine

Can billionaire Alexander Vik produce a world-class wine at his new luxury resort in Chile? Vineyard haven: Each of the 22 rooms and suites at Viña Vik has a distinct art theme and spectacular views of Chile’s Millahue Valley

During my tour of Viña Vik, internet entrepreneur Alexander Vik’s latest glamorous South American getaway, a manager told me the Frank Gehry-esque serpentine roof on the hotel was made of titanium rather than gold. That’s because titanium, she explained, has a better thermal capacity to withstand the climate of Chilean wine country.

I got the feeling that might have been the only reason.

Because otherwise, Vik, the design-minded billionaire whose first three hotels put Uruguay’s José Ignacio on the map, spared no expense in developing his new wine resort. Vik’s aim isn’t just to produce a vintage every season but also to make superlative wine. (Hotel staff regularly mentioned a goal of 100 points from Robert Parker.)    “I’ve  always been interested in the concept of terroir—what made one piece of land a great producer and not its neighbour?” the 60-year-old Vik says.

“Wine has infinite grades in quality—it’s not like growing wheat or raising cattle. I thought it would be a good challenge to grow the best wine in South America.”

In 2004, Vik, whose mother was from Uruguay, convened a research team to study Argentina, Uruguay and Chile to find the best place on the continent to grow red grapes. Two years later, they found their answer: The Millahue Valley (the name means “place of gold” in the local Mapuche language). “I’m convinced the conditions are as good as anywhere in the world,” says Vik about why he didn’t look beyond the continent.

To be sure, researchers took more than 4,000 soil samples across the 11,000-acre plot of land before Vik closed the deal. Then scientists, led by the esteemed French-Chilean oenologist Patrick Valette, installed weather stations and researched “all the elements of terroir” to determine the best places among the property’s 12 valleys to plant each varietal for the Bordeaux-style blend. Two-thirds of the harvest is sold to other wineries, while the grapes that go into the Vik blend are hand-harvested at night by a team of about 400 workers.

“We are using the diversity of grapes to make something exceptional,” says Vik. “Maybe 15 Cabernet Sauvignons, 10 Carménères and seven Merlots. It’s like a puzzle.” There are plans to eventually bottle second- and third-run wines. But a portfolio isn’t the point.

Asked how much he has invested in the project, the famously cagey—and his competitors would say dishonest—Vik tells me he truly doesn’t know. But he scoffs when I ask if he expects the venture to support itself. “Absolutely. [Making it in] the wine world is a slow process. It takes years and years and years,” to grow, age, market and distribute wines. (Vik wine retails for $130 in the US.) “It’s a long-term investment. But if you succeed, it’s very lasting.”

For all the science on display in the wine-making operation, it’s art that rules the hotel, which opened late last year. As with their other properties, Vik and his wife, Carrie, filled this one with contemporary art and commissioned artists to create installations in each of the 22 rooms. It’s the kind of hotel that only a deep-pocketed visionary could pull off, without answering to investors’ caution. 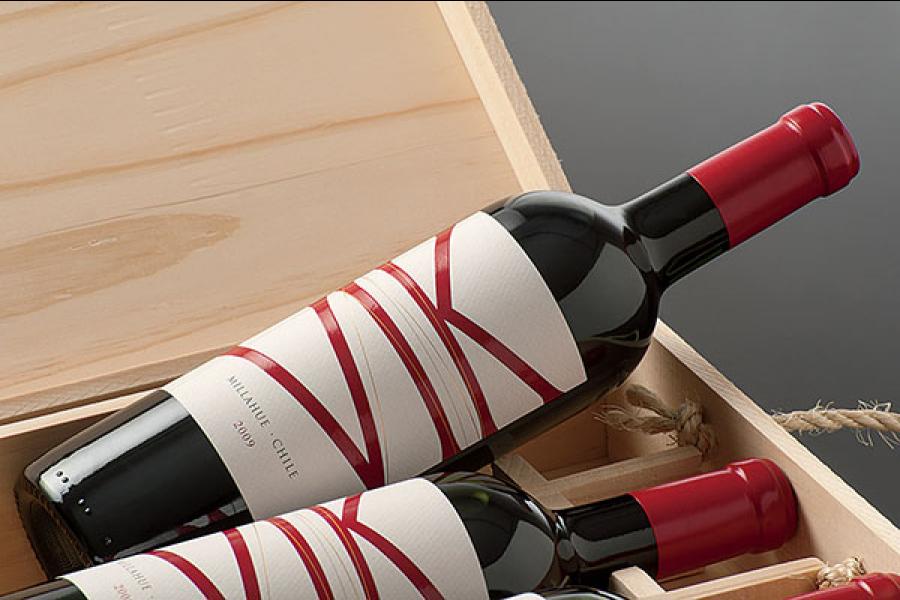 Wine it up: Vik uses a blend of grapes for his wine, letting their diversity create something exceptional

While it shares DNA with his Uruguayan outposts, Viña Vik is a singular hotel. “Estancia Vik is a Spanish Colonial hotel on ranch land that’s all about Uruguayan art and culture,” he explains. “Playa Vik is more contemporary, with 21st century architecture, and Bahia Vik is more beachy, with bungalows out on the dunes.”

“In Chile,” he continues, “it’s all about the vineyard.” The main building is perched on one of the prettiest hilltops on the property—with staggering views from every room—as is the restaurant and a slate infinity pool, which appears to be ﬂoating over the countryside.

The communal living room includes works by Chilean artist Roberto Matta and a diptych from Anselm Kiefer’s The Secret Life of Plants. The rooms and suites (which start at $1,200 a night, including meals) vary wildly, but all have a strong point of view. The Vik Suite features art by Antonio Segui and James Turrell, and the bathroom of the Azulejo Suite has hand-painted blue and white tiles in the Portuguese tradition, depicting a playful panorama of the vineyard.

Naturally, winery tours and tastings figure prominently in the Viña Vik experience, but guests can arrange guided hikes, mountain biking and horseback riding through the vineyards on short notice. There are also massage therapists in the spa, and yoga classes can be arranged with some pre-planning.

The main pastimes, though, seem to be eating and drinking.

Vik recruited chef Rodrigo Acuña Bravo, who made a name for himself at Casa Lapostolle in the nearby Colchagua Valley, to lead the kitchen. His cuisine is straightforward, hearty and delicious, making the most of the hotel’s location in Chile’s main growing region, the breadbasket to the world.

As for wine pairings, there’s just one: When guests take their seats, servers appear with decanted Vik. (There are whites and a sparkling on request.) The wine is food-friendly and surprisingly versatile.

“We’re satisfied with how the wine is developing,” says Vik. “The vines are young but producing great wines. We’re focussed on viniculture, growing the best grapes and letting the grapes express themselves. It’s holistic, organic and very pure. You can drink it with abandon without any consequences.”

Tweets by @forbesindia
Know your beer: Your guide to happy hours
Temples of trade: The world's best and biggest bourses