Take a step back from life

Balance your body and mind, or simply take a moment to breathe, at The Oberoi Sukhvilas Resort & Spa 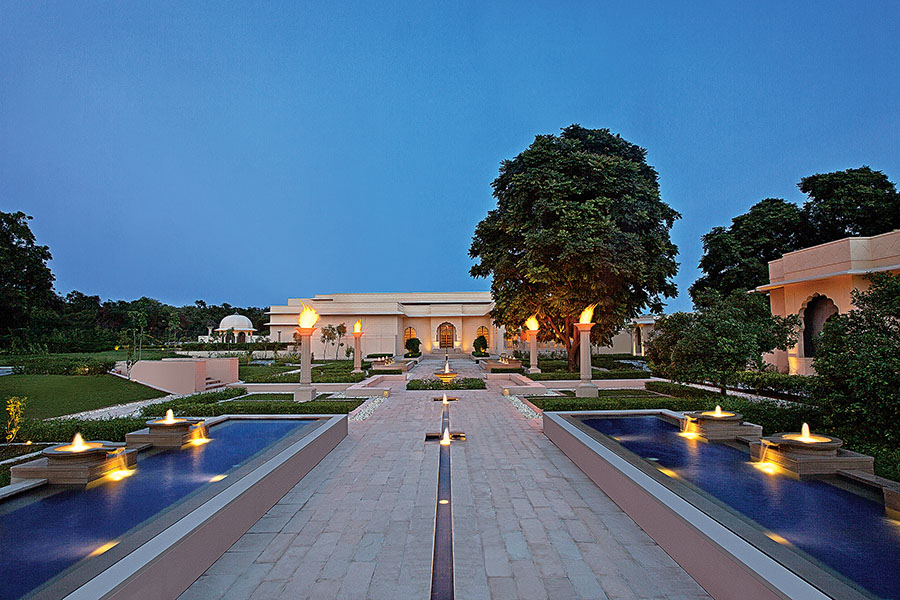 Fire torches and candles are lit as dusk sets in at the resort
Image: Oberoi Hotels & Resorts

As I plonk myself on a seat in the hydrotherapy pool I am amazed at how the Romans got so many things right. Bathing played a major part in ancient Roman culture and even soldiers, encouraged to stay fit, healthy and clean, were provided bathhouses consisting of sweating rooms and hot rooms, and cold and warm rooms, in their forts.

I’m no war-weary soldier and this is no fort. I’m in the lap of luxury at The Oberoi Sukhvilas Resort & Spa, Siswan Forest Range, New Chandigarh, the newest of the five Vilas properties of Oberoi Hotels & Resorts. The resort opened in November 2016 and, after the opening of the spa this January, is also Oberoi Hotels’ first destination spa and resort. Which means a spa spread over 12,000 square feet that offers Ayurvedic, Western and Eastern therapies, hammam scrubs as well as hydrotherapy—the combination of sauna, cold showers, steam and tepidarium that the Romans perfected to an art and that the Sukhvilas has taken note of and adopted. 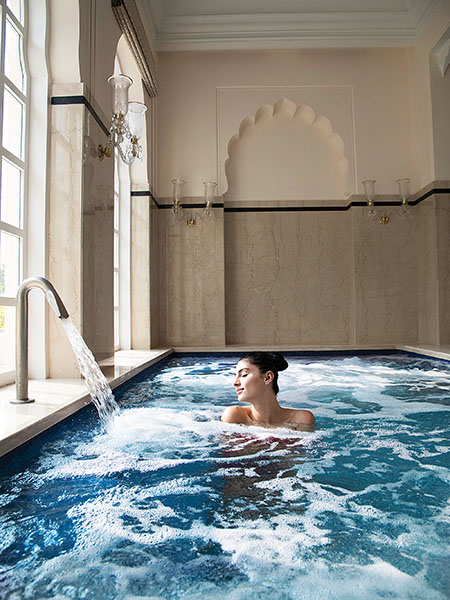 The hydrotherapy pool can make you lose track of time
Image: Oberoi Hotels & Resorts
The 60-key resort is spread over 25 acres, and like their other Vilas properties—the group’s leisure hotels—this one too has traditional architecture. And besides clusters of rooms and detached suites with private gardens and swimming pools, there is also luxurious tented accommodation. There’s also the three-bedroom Kohinoor Villa, which, with its central courtyard, is reminiscent of a haveli. Step out of any of the rooms and you are greeted with cusped arches, colonnaded verandas, landscaped courtyards, and fountains and water bodies, all of it lending itself to long meditative walks. 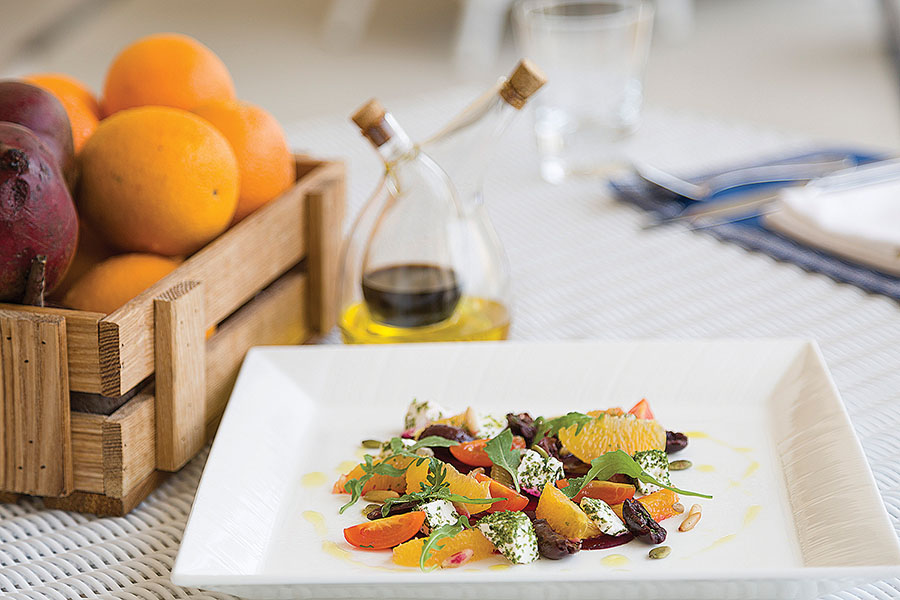 Salad of slow roast beetroot. International and Indian cuisines are available at the two restaurants at the resort
Image: Oberoi Hotels & Resorts
I have been walking around all over the place since I got here, and now, sitting in the hydrotherapy pool, I have lost all track of time and sincerely believe I could stay here forever. But get out I must and make some important decisions: Like choosing between an aromatherapy and Ayurvedic massage to balance the doshas and recalibrate mind and body. Whether you go the traditional way gurgling oil in your mouth and taking it up your nose to clear passages before the Dinacharya massage, or make use of essential oils to completely relax, all of it ensures there are no kinks left in your body. 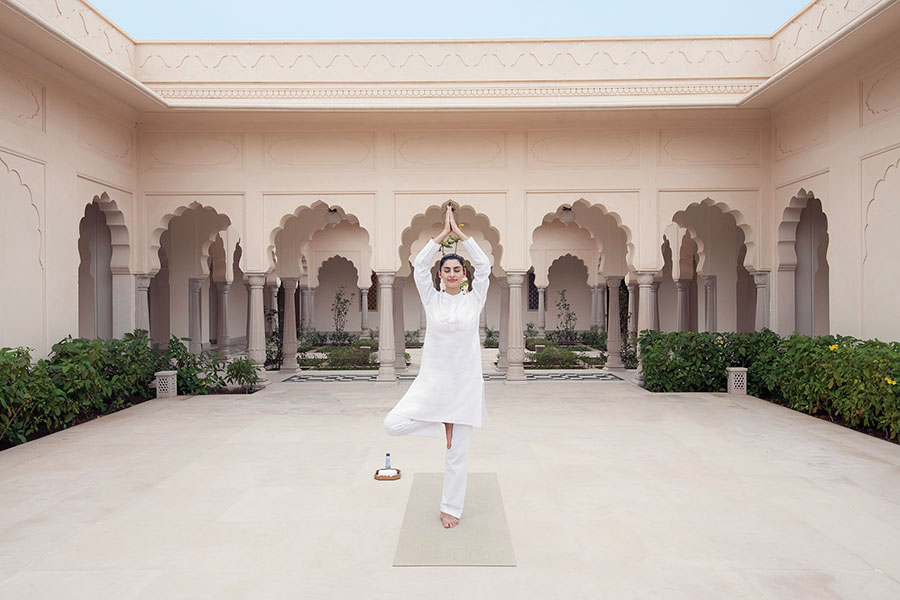 The yoga deck at the spa is a tranquil place
Image: Oberoi Hotels & Resorts
The resort is also set on the edge of 8,000 acres of the protected Siswan Forest Range. Which means it doesn’t need any music, in the spa or elsewhere—there’s music in the form of bird calls all around, punctuated by the gurgling of fountains. Birds knock at your window, guinea fowl pop out of hedges, and peacocks flit about everywhere from dawn to dusk squawking from the top of tents, pecking around near the pool and hop-flying along the jungle ridges. 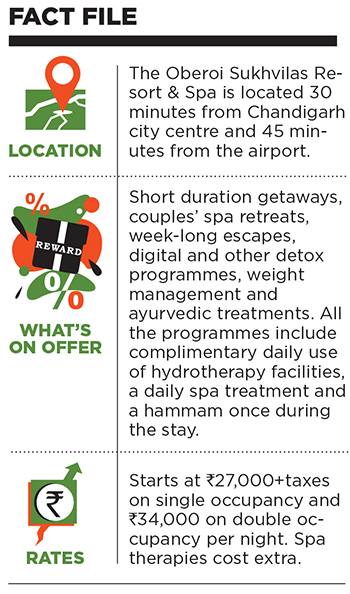 The quiet is refreshing: Whether you are heading for a yoga session on a grassy clearing in the forest with sambar deer making their way through the trees and birds flitting about (there is a yoga deck that also looks out at the forest, but a session in the forest is something else) or going for a guided nature trail; whether you are indulging in mindfulness activities, trying your hand at archery, playing badminton or catching the sun setting over the forest while you swim in the pool at dusk. And as day turns to night, the place changes character, with fire torches and candles, and glowing fountains.

The two restaurants, Anant Mahal, named after the perpetualness of the forest, and Kaanan (which means forest) serve international and Indian cuisine, including some fresh-off-the-coals home-style Punjabi food—unless you have opted for an Ayurvedic package, in which case your customised Ayurveda-inspired meals will come from the spa kitchen.

There are Le Corbusier buildings—among them the Secretariat and the Palace of Assembly—a rock garden and rose garden, and the Sukhna Lake to explore in Chandigarh, just half an hour away, but really, you won’t want to. Because sometimes all you need is to go nowhere and do nothing, to take time off from life and restore balance.

Tweets by @forbesindia
From AI to drones: TCS has its foot on the innovation pedal
GST implementation: Good, but not yet simple