Once the Wildenstein family's private wildlife conservancy in Kenya, the 58,000-acre Ol Jogi Ranch can now be rented for an exclusive luxury safari experience 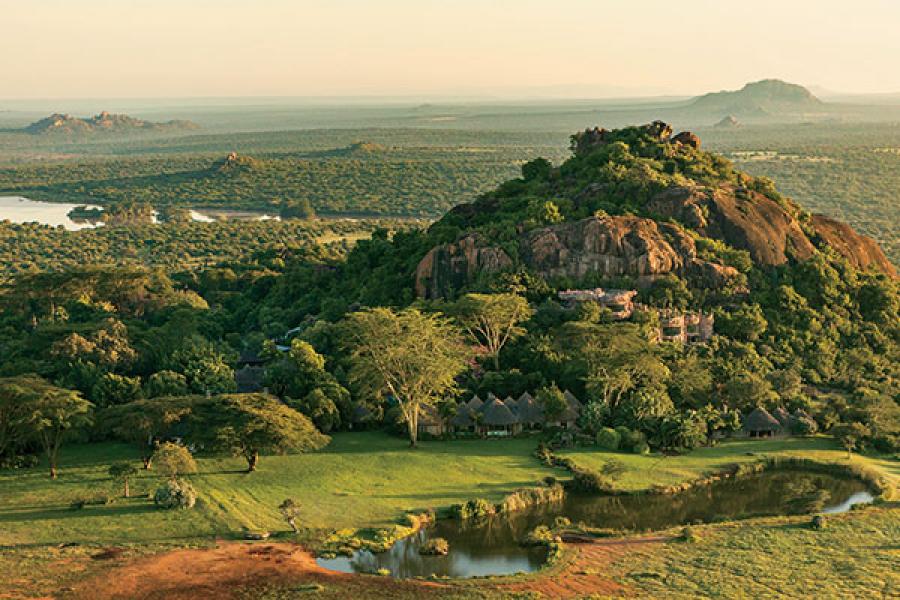 It’s easy to get caught up in the exquisite details at the Wildenstein family’s Ol Jogi Ranch in Kenya—the Murano glass globes over lamps, the sumptuous Hermès linens, the perfectly polished Buccellati silver—but that’s missing the point. Magnificent as all the objects in the house are, they’re embellishment. What’s enchanting about the place is the wildlife: Incredible density and diversity, including migrating elephants, 15 percent of the world’s remaining Grevy’s zebra population and more than 40 of the 790 black rhinos that remain in East Africa.

The experience here is unusual because guests have the land to themselves: Ol Jogi (named for a native shrub) comprises 58,000 acres of the Laikipia Plateau. Previously a cattle ranch, it was the family’s private compound and wildlife sanctuary for nearly 35 years, before opening to the public last year as an exclusive-use villa.

“I hate feeling like a tourist,” says Alec Wildenstein (34), the heir to the family’s art-and-horses fortune, who took over its management after his father died, in 2008. “Here you don’t feel like a tourist.” By that he means not seeing 10 Land Cruisers parked around a small herd of elephants, as you do in many parks and conservancies, and not having to follow rules—aside from the Ol Jogi rangers’ careful precautions—about night drives, hikes and even horseback safaris for guests who know what they’re doing. “People here get to walk and take risks that they understand.”

Anyone who has been part of that great four-wheeled migration will appreciate the scene from the main house’s veranda and dining table, where the backyard watering hole and salt lick were virtually never devoid of wildlife during my recent five-day stay. It’s a safe gathering spot for hippos, elephants, zebras, buffalo, impalas, gazelles, wildebeests and various birds—sometimes all at once. One guest saw a rhino without having to get up from one of the shaded daybeds. Even better, a long tunnel leads to a bunker with eye-level windows a few metres from the animal action, which guests can access day and night. It is features like this that give Ol Jogi its eye-popping price: $210,000 per week for 14 people (though when you do the math, it’s comparable to the per-person rates at top safari lodges).

A passionate conservationist, Wildenstein had long wanted to open Ol Jogi as a resort. “The house was built for a generation that was much more extravagant than I am,” says Wildenstein, who spends about half of each year managing conservation programmes here and often pursuing his other passion: Flying and designing bush planes. He wishes he could spend more. His parents loved to entertain at the lodge, “but I’m simple. I’m low-key. I have a few buddies who come, but I don’t live the way Ol Jogi was designed for. So I like to see people come and use it the way it was meant to be used. And I enjoy sharing the experiences here, seeing people relax and connect with nature.”

More important, by earning revenue, he can double down on his investment in conservation. His goal is to make the operation self-suﬃcient, with guest fees supporting conservation work, so that it can continue without him and also be a private-enterprise model for other conservation and community development projects in the region. 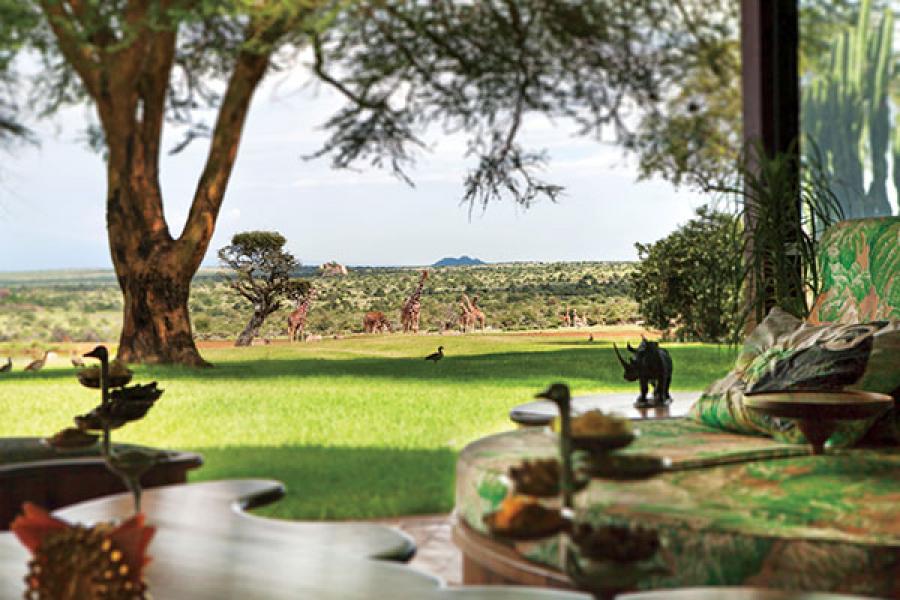 Image: Durston Saylor
Your own private Kenya : Ol Jogi Ranch
Wildlife and security manager Jamie Gaymer echoes that goal during a tour of the ranch’s wildlife rescue centre, which rehabilitates animals that have been harmed by human activity, and has led free educational programmes for 70,000 Kenyan students and counting. “All of that”—meaning the house—“is what it is so that we can do all of this.” Gaymer oversees some 120 rangers and security guards, blood-hounds and attack dogs, and leading-edge technology to fend off poachers (a major menace in East Africa, now that rhino horn can sell for as much as $30,000 a pound on the Asian black market) and top-notch veterinarians and medical equipment. Ol Jogi is one of few places left in Kenya that can take in animals and keep them safe and fed and has been so successful that people from local communities bring in wounded animals to be cared for, and the Kenya Wildlife Service has sought permission to relocate endangered animals here.

The main house and freestanding cottages were decorated by Alec’s parents, who had a ﬂair for the ﬂamboyant. Most of the guest “rooms” (more like houses) have elaborate stained-glass windows with wildlife images (as well as picture windows onto the real thing), handcrafted furniture, enough antique treasures to fill an auction catalogue and separate his-and-hers dressing rooms and bathrooms with downpour-force rain showers and Jacuzzi tubs. The trappings of luxury are certainly there, but nothing seems forced or theatrical—it wasn’t art-directed for guests but simply what was in the family’s home. 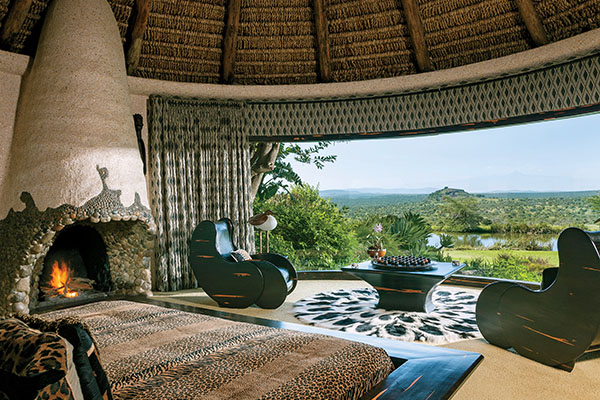 A 45-minute plane ride from Nairobi, Ol Jogi Ranch features all the comforts of home

Combine that with intuitive service from a staff that has worked here for decades and guests truly feel at home. (And the skilled massage therapist on call doesn’t hurt in the comfort department.) Dinner may be served by white-gloved waiters at a table laden with candelabra and cut crystal, but you can show up in sneakers and jeans. Gaymer and his wife, Carol, Ol Jogi’s client liaison manager, often turn up at meals to tell guests about their lives and work there, as does Wildenstein if he’s around and invited.

As for what’s served on that custom-designed china, the food is outstanding. The resident French chef worked for Wildenstein’s grandfather (having previously cooked for the Rothschilds) and has been with the family for decades. Lunches are buffets of inventive salads, much of it plucked from the quails’ nests and gardens outside or picked up on Wildenstein’s ﬂights to the Kenyan coast. Dinners are family-style, and the setup for bush dinners or hilltop lunches is no less sophisticated.

To be sure, there is a lavishness to the proceedings: Staying here isn’t just about an immersion in the wild but in a particular lifestyle. Still, the wild is what wins. “It’s not about the house,” says Wildenstein. “The house alone gives the wrong impression. Ol Jogi is about experiences and nature.”

Tweets by @forbesindia
Dan Gilbert's Detroit makeover is the most ambitious HR project in the US
Indix: The 'Google of Products' Helps Retailers Take Real-Time Decisions