What The Well-Dressed Foot is Wearing

When it comes to shoe relationships, most men are monogamous, while the ladies wear their promiscuity on their, er, heels. Gentlemen, it’s time for equality! Here are five pairs of shoes every man must own. You’re welcome 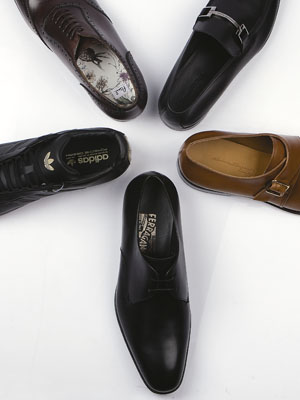 No, there is nothing called an all-purpose shoe (and certainly not that rubber-soled distant cousin of the Ambassador car you’re looking at right now). No, one shoe for work and one for play isn’t much better either, not unless work means a factory shop floor and play means two rounds of your neighbourhood park in the morning. No, you won’t turn into a metrosexual if you buy more shoes, because real men occasionally do have feet, and a fashion sense. And no, four pairs doesn’t cut it either.

Five is the magic number of shoes you need to stylishly step over anything life throws at you: A presentation to the board, an afternoon at the races, the launch party aboard the yacht or a boogie-woogie at the club.
We’ve left out sandals and sports sneakers; doesn’t mean you have to, just as long as they count over and above the five we recommend.


Ferragamo Loriana
Rs. 45,000
A good Derby is to shoes what a crisp pair of blue jeans is to a wardrobe —simple, durable, multi-faceted and comfortable. It’s the shoe you’ll reach for by default and the one you’ll rarely go wrong with. Like, for instance, this black Ferragamo Loriana with round toes, stacked heels and clean lines. But in case you feel the need to project a little gravitas, say while negotiating the terms of your latest acquisition, reach out for an Oxford — the Derby’s stiffer, more formal cousin recognised primarily by its “closed lacing”. 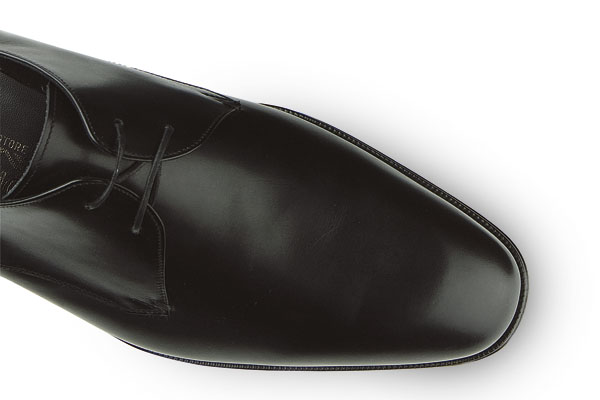 Zegna Loafers
Rs. 28,300
Don’t be fooled by the casual look of the Loafer. Think Vijay Mallya: You’ll need to either earn the right to wear them or be born into it. But give the boring ones with just a simple leather band across the facing (called “penny loafers” because of a fad in the US in the 50s, where hip young ’uns would insert a penny into a slit in the band) a miss and instead opt for slim ones with a leather or metal ornament that adds some character and dressiness. But, pretty please, don’t wear them with suits. That would mark you out as being stuck, fashion-wise, in the 80s. These black Zegna Loafers are a great mix of lace-less comfort and casual chic. 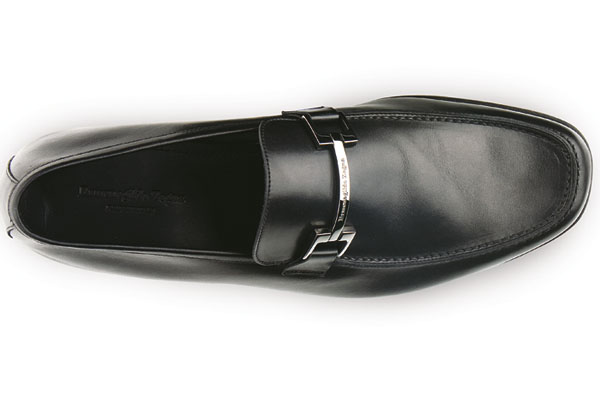 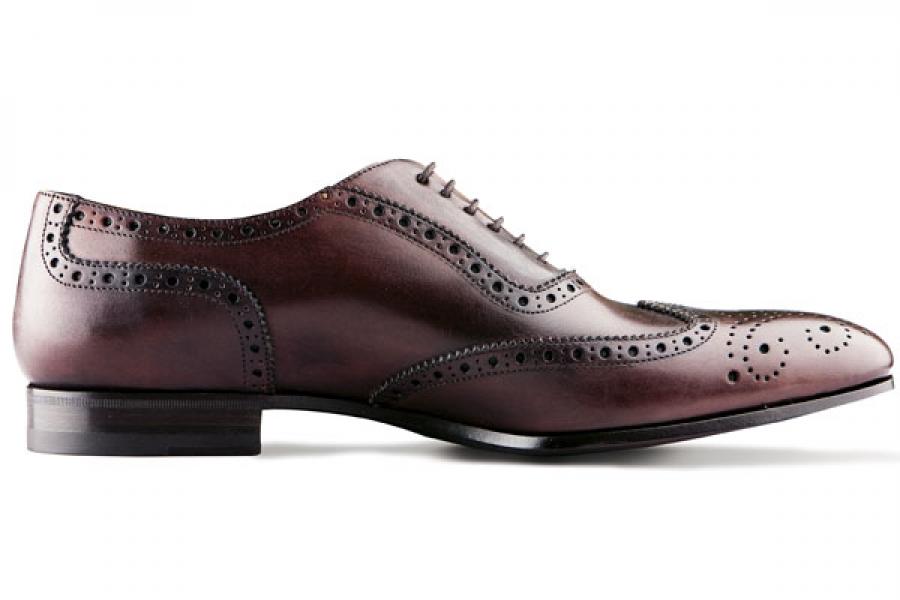 Stanley Shoe by Paul Smith
Rs. 24,000
Recognisable by the inverted “W” shaped cap pattern on their toes, the Wingtips (known as Brogues outside the US) take away much of the stuffiness around formal shoes without becoming a purely informal shoe. Match them with suits, trousers and khakhis with equal ease. A good example would be this Stanley Shoe by Paul Smith which combine a rich tan colour with classic brogue patterning. 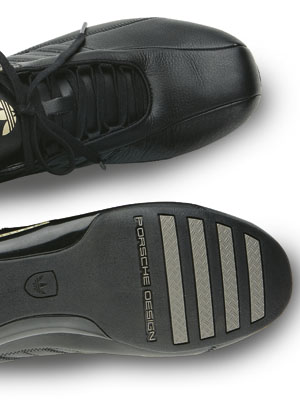 Adidas Porsche Design
Rs. 6,799
Fashion sneakers, especially ones with a leather body, are an absolute must have today. Wear them with jeans, semi-formal trousers or khakis to get that sporty and active vibe, though keep them clear of the office (at least Mondays through Thursdays). This black Adidas Porsche Design S2, the result of a collaboration between Adidas and Porsche, is a driving shoe. Alas, there’s no car included, but what it does have is a sleek design influenced by Porsche’s legendary cars.


Ferragamo Monk Strap
Rs. 27,000
Sitting half way between the formality of lace-ups and the informality of casual loafers are the Monk Straps. A good Monk Strap will at once set you apart from the straitlaced crowd with the metal buckles adding just that extra hint of character. In our opinion two is better than one when it comes to the number of buckles (the count does not extend beyond two!) but, hey, one is fine too. This brown Ferragamo Monk Strap stays clear of any cap toe pattern to offer an uncomplicated design, with the lone buckle providing the only embellishment. 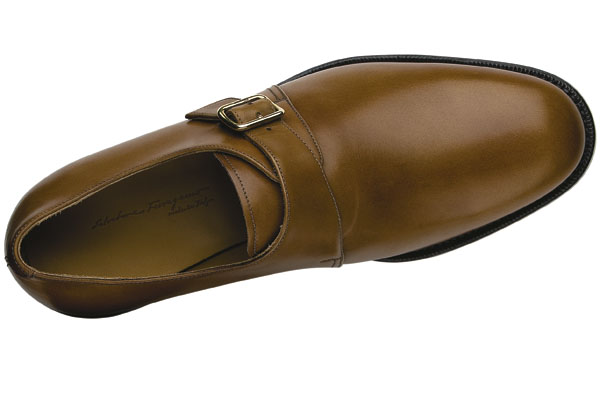 Deconstructing the Men’s Shoe
1. STYLE Oxfords, Derbys, Loafers, Monk-straps…you know the game now.
2. TOE The part at the very front of shoes, mostly reinforced to prevent deformation or damage. The way it is “capped”, or not, makes a big difference.
a. Plain toes, as the name suggests, are not capped. Some find them minimal and elegant, others find them boring. See the Ferragamo Derby to see if this style is for you.
b. Cap toes are the most common, made of a simple line of reinforced leather leaving a semi-circle for the shoe front. You can’t go wrong with them.
c. Moc toes have a separate piece of leather resembling a bunched up crease stiched along the edges of the shoe’s front. Unless you’re lucky or spending a lot of money (like with the Zegna loafer) you’ll find them in cheap, ugly mass-market shoes.
d. Bicycle toes are a variation of the Moc toe, allowing the top and front of the shoe to be unbroken by the crease. The Adidas Porshe S2 sports one, though it isn’t formal. Better than a Moc toe.
e. Wingtips have an inverted “W” as the toe cap, like with the Paul Smith “Stanley”. After cap toes they are the most common choice, but they give an immediate dash of semi-formality, so you’ll need to be careful while wearing them in formal occasions.
3. COLOUR The two colours you must have in your shoe closet are black and cordovan (the brown which is burgundy with a hint of rose). There used to be a time when black was considered easy to pair with almost any clothing colour. But that time isn’t today. Browns, especially cordovans and dark-browns, go well with a range of suit and trouser-shirt combinations. When you’re feeling bolder try some other colours like blue, green, white or even purple! Throw out all those concepts about wearing brown shoes with brown belts and brown watches. Instead wear what you feel confident and stylish in.
4. GEOGRAPHY OF ORIGIN Three countries — Italy, Britain and USA — account for a majority of the well known shoe makers and design sensibilities.
a. Italian shoes (Salvatore Ferragamo, Berluti, Bontoni, Santoni) tend to be sleek, fashionable and expensive, like their suits and cars.
b. British (Clarks, John Lobb, Edward Green) ones are a studious blend of traditional with contemporary, but always solidly constructed.
c. The Americans (Allen Edmonds, Florsheim, Cole Haan) are the worst – conservative, clunky but comfortable.

Tweets by @forbes_india
The most Expensive Pharma Deal ever
South Africa: Between Two Worlds