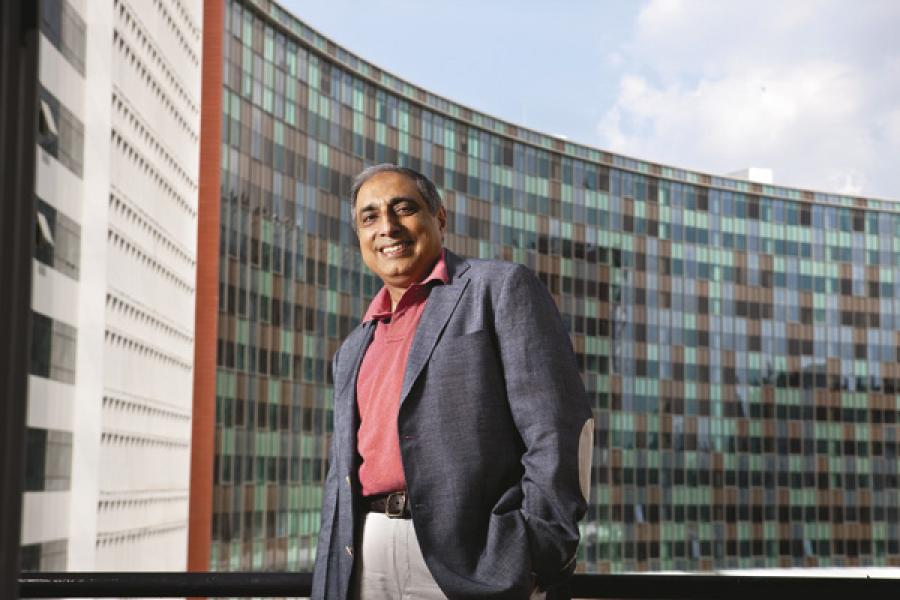 Name: Irfan Razack
Age: 58
Profile: CEO of Bangalore-based Prestige Constructions, a company promoted by his family
Rich List Rank: 87
Wealth: $550 million
Did You Know?: The Razack family got into the real estate business while looking to buy property to avoid being taxed after the sale of their family home in the 1980s.

It was 4:20 p.m. on an October evening in 2008, in Bangalore’s Whitefield suburb, when Irfan Razack’s world almost came crashing down.

Steel frames holding up the recently laid concrete floor on the 15th storey of a commercial tower in Prestige Shantiniketan, a 105-acre township being built by Razack’s company, gave way. The floor slab that the frames were holding up went crashing to the floor below, which in turn gave way.
Within minutes, six floor slabs had crashed, and before half an hour, almost all the floor slabs for the entire building.

In the normal course of things such an accident might have been just a public relations crisis for Razack, 58, the CEO of the Rs. 1,540-crore Bangalore-based real estate developer Prestige Constructions (his family promotes the company). But things were far from normal. Because Shantiniketan was quite simply the biggest bet made by Razack in his journey.

The project comprises more than 3,000 residential apartments, 3.5 million square feet of prime commercial space and ancillary facilities like a five-star hotel, a shopping mall and a multiplex.

The project was also suffering from severe cost overruns because of galloping construction prices that had risen by almost 50 percent more than what had been budgeted for. But Razack had no way to recoup those costs from buyers because the majority of his apartments had already been sold. Plus, between a third to a fourth of the construction had to be handed over to the person who owned the land as his share.

Worse, the global economy had fallen off a cliff just a couple of months ago and was set to enter a period of recession. Real estate developers everywhere, including India, were the first to feel the pinch as families stopped buying houses and banks stopped lending money.

In such an environment, the crash, and another subsequent one at the same township within two months, could have put paid to the entire project.
The typical large-brand real estate developer would have just passed on the extra costs to its customers, but Razack stood by his original rates.
This decision is likely to have cost Prestige a significant amount of money, say Bangalore real estate experts.

But that’s the kind of person Razack is — the old-school type, the type that still attaches a modicum of value for quaint concepts like reputation, value or responsibility.

Real estate was an accidental entry for the 20-something Razack during the early 1980s, when his family was exploring properties to buy in Bangalore to avoid getting taxed on the proceeds from the sale of their family home on Infantry Road. After trading in properties for around five years, Razack and his brothers, Rezwan and Noaman, decided to enter the fray as developers themselves.

Razack’s seed capital of just Rs. 40,000 was testament to his firm belief in the “pre-sales” model of property development by which properties are marketed and sold to a large extent before they are built, thus turning customer cheques into cash flows.

“There’s no reason why pre-sales will not work if you offer customers affordable, well-located and credible products,” says Razack.

But selling a product like property based on just promises isn’t an easy task. So Razack went about building a distinctly premium and respected brand in Bangalore.

His buildings sported Greek columns and Roman arches, were named Edwardian, Acropolis and Notting Hill and were located at prime locations around Bangalore. New projects were sold out often within hours or days of being launched, mostly to real estate speculators, companies and wealthy individuals, who then sold them at a premium to actual home owners.

So successful was Prestige’s pre-sales model that many wondered if it was leaving too much money on the table for investors in its projects, judging by the rapid appreciation in price in a short time frame. But ask Razack and he says “The one word that kills the pre-sales model is greed.”

This philosophy allowed Prestige to remain relatively unleveraged for the better part of its journey.

“Our first major leverage was around 1996-97 when the markets were tanking and we had multiple projects on the ground. We took a loan of Rs. 7 crore in two tranches from HDFC for Acropolis,” he says.

But Razack’s conservative philosophy around business was balanced by his equally grandiose plans around developments: Malls, large office spaces for technology companies, high-end villas and apartments.

Nonetheless, real estate is a notoriously cyclical and unpredictable business, with the potential to punish even the most minor of missteps.
Which is why Razack is cementing his business by diversifying as much as possible.

From its roots in large-scale office spaces and premium residential properties, Prestige has been progressively steered by Razack towards retail and hospitality as well. He is partnering with Vijay Mallya to build the ultra-premium U.B. City in central Bangalore. He is balancing that with the budget-minded Tranquility project on Old Madras Road with nearly 2,400 apartments priced upwards of Rs. 20 lakh.

Razack has created another steady revenue source by retaining ownership in many of his projects and renting them out instead of making an outright sale. “Our rental income will go up from Rs. 150 crore this year to around Rs. 500 crore by 2014,” he says.

“Prestige has, like any good global real estate developer, created a portfolio of residential, commercial and now rental properties. It’s always good for a developer to own real estate and earn rental because then you can comfortably choose your future projects thanks to the assured cash flows,” says Kamal Sagar, the founder and CEO of another Bangalore-based real estate developer, Total Environment.

One such choice for Razack is Golfshire, a new project comprising 225 villas abutting an 18-hole golf course around the picturesque Nandi Hills on the outskirts of Bangalore. The minimum cost of a villa is well over a million dollars.

But would these be weekend homes for the rich, given Bangalore’s notoriously bad traffic?

Instead Razack inverts the conventional wisdom and asks why they cannot be the primary homes? “In no major city around the world do people stay in downtown areas. I envisage a future where people will live 30 km from the city, surrounded by greenery and open spaces, and possibly own a one or two bedroom apartment in the city as their weekend apartment.”

Whether Razack will make a success of this too remains to be seen.

(This story appears in the 18 November, 2011 issue of Forbes India. You can buy our tablet version from Magzter.com. To visit our Archives, click here.)

Tweets by @forbes_india
The Pit Stop in F1
Rich Wheels