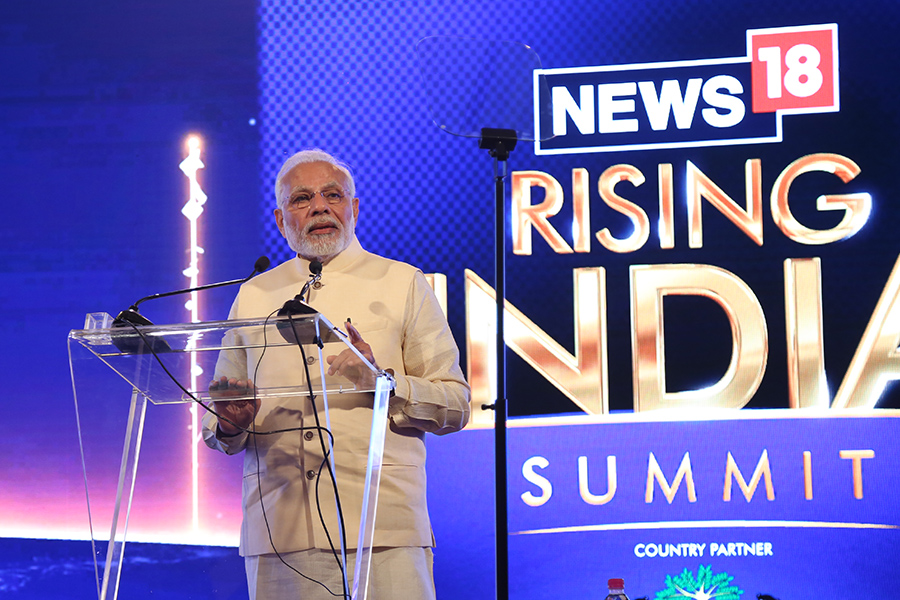 During his key note address at the News18 Rising India Summit, Prime Minister Narendra Modi informed the delegates that the Government is focusing on four pillars in health: preventive health, affordable healthcare, supply side interventions and mission mode intervention.

He began to explain his approach to preventive health by stating, “We all know that cleanliness is the first requirement for a healthy life. So, we activated the Ministry of Drinking Water and Sanitation.” Recounting the achievements in this sphere, he stated that there are toilets in 13 crore houses today, compared with 6.5 crore houses in 2014. Further, he said sanitation coverage has risen from about 38%, to about 80%.

His government has been taking innovative steps to increase the usage of public toilets. For instance, for citizens to be able to locate the nearest toilet, it was envisaged that data on the nearest unit should be on a publically available online maps platform. The MoUD then partnered with Google to provide location of toilets on Google Maps Platform.

The Prime Minister pointed out that other measures to promote preventive care included the Wellness Centres announced in the recent Union Budget and various immunization campaigns. Most prominently, as a practitioner of the discipline of yoga himself, he explained how yoga has established a new identity for itself. “Due to the activation of the Ayush Ministry, Yoga is becoming a mass movement around the world today,” he said proudly.

“Besides offering preventive healthcare and making healthcare affordable, we realise the importance of making it accessible. We have taken many steps towards this end,” said Prime Minister Modi. He informed that more than 3000 Jan Aushadhi Kendras had been established across the country, where more than 800 medicines were available at low rates. The prices of some common medical requirements such as stents and knee implants had also been regulated. Acknowledging that insurance was crucial, he reiterated the finance minister’s promise in the Union Budget – 2018-19 that the Ayushman Bharat scheme would offer health insurance of as much as Rs 5 lakh to nearly 10 crore poor and vulnerable families (approximately 50 crore beneficiaries) for secondary and tertiary care hospitalization.

On the third pillar – supply side interventions – he explained, “A dearth of doctors in the country, especially in the villages, is a major constraint to our healthcare dreams. Accordingly, our government has increased medical seats to deal with this.” In 2014, there were 52 thousand undergraduates and 30 thousand post-graduate seats in medical colleges. Now, there are more than 85 thousand undergraduates and more than 46 thousand post graduate seats in the country. In addition, new AIIMS and Ayurvedic Sciences Institutes are being established in the country and there is also a plan to construct a medical college among every three parliamentary seats. In the field of nursing and para-medicals, work is also being undertaken to increase human resource.

Defining the last pillar, mission mode intervention, Prime Minister Modi explained, “There are some challenges that need to be dealt with on a ‘mission mode’ if we want to see results.” These, according to him, included better health for mothers and children, to ensure that they are free from disease, healthy and strong. Towards this end, his government has involved the Ministry of Women and Child Development and initiated various campaigns - Prime Minister's Safe Maternity Campaign, Prime Minister's Mata Vandana Yojana, the Natioanl Nutrition Mission, amongst others.

The most laudable facet of the Prime Minister’s approach to a healthier nation is that his campaign involves various ministries, in addition to the Health Ministry. These include the Ministry of Drinking Water and Sanitation, AYUSH Ministry, Ministry of Chemicals and Fertilizers, Consumer Affairs and Women and Child Development Ministry. “To advance our goal, we have outlined a more holistic approach,” he explained. “For better health in our country, if the Health Ministry works alone, it only creates silos; solutions do not emerge. Our effort has been: No Silos, Only Solutions.”