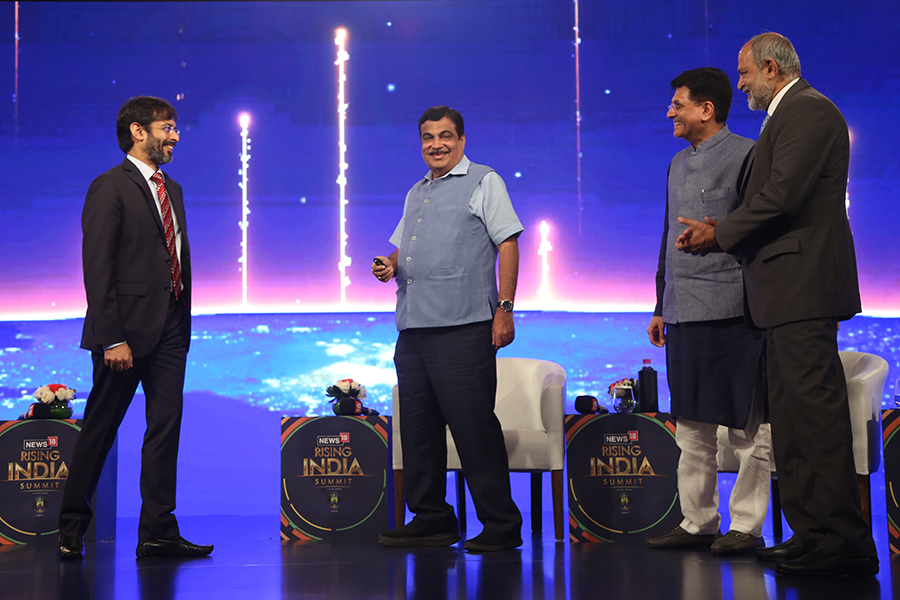 The News18 Rising India Summit celebrated India’s achievements – its return to robust domestic growth, its contribution to the global economy, its ratings and rankings being revised upwards by international institutions, the tangible confidence that the world has expressed in the form of business ventures and FDI, and more. But the summit was not about sitting on laurels achieved so far. It was more about defining changing paradigms and providing vision and leadership that would take India to a completely different plane.

Infrastructure, now widely acknowledged as a necessary pre-condition for and supplement to growth, was given a place of pride at the summit, with ‘day 1, session 1’ dedicated to it. ‘The Building Blocks of a Rising India’ saw two prominent and dynamic ministers – Shri Nitin Gadkari, Minister for Road Transport & Highways, Shipping and Water Resources, River Development & Ganga Rejuvenation and Shri Piyush Goyal, Minister of Railways and Coal – talk about the state of their charge, achievements so far and vision for the morrow.

Illustrating how innovative thinking could deliver benefits all around, Nitin Gadkari stated how he planned to meet two objectives with one simple solution. Garnering funding is typically considered as one of the biggest challenges in infrastructure projects. At the same time, simple working class people, professionals, defence personnel, pensioners, and the like, are constantly looking for good and safe avenues in which they can park their hard earned savings. Offering them a chance to invest towards building world class infrastructure would create a win-win situation. It would give them an opportunity to receive a relatively high (relative to bank deposits), stable return, for the long term of at least a decade, from a company that has received a triple A rating from international organisations. They would also enjoy a transformation to their lives that emerged from the infrastructure they helped to build.

When quizzed about his vision for the Indian Railways by 2025, Piyush Goyal confidently expressed, “The best railway system in the world”. Elaborating further, he said, “It’s an entire experience we seek from the railways. For customers of goods traffic, the expectation would be a predictable, timely delivery of their goods, which remain safe and secure en route, and at reasonable and affordable freight rates. Passengers, on the other hand, are broadly looking to experience the charm of the old Indian Railways and more – good catering, clean coaches, clean stations, high levels of safety, modern technological interventions coming into the system. We are working on several fronts which will make Indian Railways the world’s safest, most comfortable and most affordable railway.” To lend further perspective to his vision, he continued, “We want to create a situation where a rich man can travel by train to enjoy the charm of the journey and the poor man can have the railways as his mode of transport, which is ultimately the social objective of any public utility.”

Having the change-makers from the Railway and Road sectors on a platform together, presented the opportunity to share the broad outline of their common mission for the country’s logistics. They explained how they planned to work together to improve transport (the combination of road and rail) efficiency in general, decongest cities and bring down the proportion of transport costs in general business expenses.

The delegates at the summit were also treated to the perspectives and outlooks on infrastructure of the Minister for Civil Aviation, Chief Ministers of various states, representatives of public and private sector think-tanks like Morgan Stanley and NITI Aayog, amongst others.
The message that came across, loudly and clearly, was that the more large and audacious the dream for infrastructure, the better; however, the dream would have to be backed by ingenious ideas, strong and decisive leadership and a corruption free system of implementation and delivery.