1 Ruskin Bond’s Five
Bond, one of India’s best loved writers of books for young people, is moving into new territory: This collection of short stories is aimed at adults. In his new book, he talks about physical relationships, loneliness and desperation, about leprosy, about beautiful women facing big problems. It will be interesting to see what Bond, nature walker from Dehradun, a gifted writer with a knack for charming stories about innocence and small-town life, move out of his comfort zone and tackle adult
issues in Delhi.

2 Chuck Palahniuk’s Tell All
When you think that Chuck Palahniuk, author of the cult novel, Fight Club, has finally run out of ideas, he pulls a fast one on you. His next book features Lillian Hellman, a playwright, and the lover of the great crime writer Dashielle Hammet. 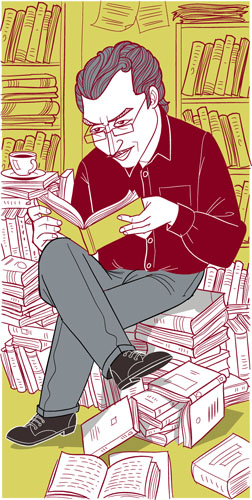 Image: Malay Karmakar
She was the writer of the film The Children’s Hour, where Audrey Hepburn and Shirley McLain are portrayed as lesbians. Palahniuk is completely fascinated by Hellman and wants to give her a makeover, turn her into “a larger than life Super Hero,” to quote the author. We can take a wild guess where this one is headed.
3 Nassim Nicholas Taleb’s Tinkering
We can expect this third book from NNT in 2010, though there are no formal announcements. After writing Fooled by Randomness and The Black Swan, the writer is not really moving away from his ideas about randomness. Taleb has always felt that portfolio theory is hogwash and there is not much that one can do in risk management by making it quantitative. In Tinkering he concentrates on trial and error methods, and feels it will save us from ourselves as the entire process is in a better position to capture black swans. It is said that NNT has received an advance of $4 million for this book.
4 Philip Pullman’s The Good Man Jesus and the Scoundrel Christ
Pullman’s new novel that will have the mixture of history and fantasy we expect from him. This latest offering from Canongate’s Myths series is served with a heavy helping of guaranteed controversy. He’s pissed off the Vatican with the His Dark Materials, and now he’s going to get all of Christendom baying for his blood. As Pullman himself says, “I’ve always been fascinated by the two parts of the name of Jesus Christ, and by the difference between them. Another thing that’s interested me for a long time is the way in which the Christian church began to formulate its beliefs and establish a canon of scripture: there were many more gospels than four, but why were those four chosen and others left out?” The book is expected around — wait for it — Easter.
5 John Brockman’s This Will Change Everything: Ideas That Will Shape the Future
Every year, Edge.org’s World Question Center asks a question. 2006: “What is your dangerous idea?” 2007: “What are you optimistic about?” 2008: “What have you changed your mind about?” In 2009, John Brockman, Edge’s publisher, asked this question: “What game-changing scientific ideas and developments do you expect to live to see?”
The book contains answers from over a hundred people, among them, Nassim Taleb, Ian McEwan, Kevin Kelly, Richard Dawkins, Alan Alda, Brian Eno. New Scientist says, “Some ideas are predictable (immortality, designer children), some world-saving if they happened (oil we can grow) and some we’d be better off without (neuro-cosmetics).” Seed says the book is “like attending a dinner party where every guest is brilliant and captivating and only wants to speak with you — overwhelming, but an experience to savor.”
6 Somnath Chatterjee’s autobiography
Somnath Chatterjee was the member of the Communist Party of India for 40 years. He was also the speaker of Lok Sabha for four years till he was expelled from the Communist Party. If MoU-Da (as Somnath Chatterjee was called for signing numerous Memoranda of Understanding when Jyoti Basu was the chief minister of West Bengal), is candid — and there’s no reason to expect this upright gentleman to mince words or varnish the past — then his autobiography should be a fascinating account of an era.


7 Vilayanur Ramachandran’s The Man with the Phantom Twin: Adventures in the Neuroscience of the Human Brain
The human mind is the frontier and imposes tremendous challenges for researchers. There have been broadly two approaches to understanding the brain. The philosophers like Daniel Dennett and David Chalmers try to explain the brain and consciousness from a series of qualitative attributes like motives, feelings or desires. The neurologists like Oliver Sacks and Antonio Damasio use a biology-based approach and combine it with information theory to understand how brain remembers, forgets or analyses the world. V.S. Ramachandran follows the latter stream. Specifically, his area of interest is visual perception. But in this book, Ramachandran steps into Oliver Sacks territory.The book has a beguiling collection of bizarre behaviour, such as a patient who becomes progressively demented yet creates beautiful paintings of extraordinary realism, a woman who suffers from a paranoid terror of the strangers who live in mirrors, a stroke victim who can no longer understand metaphors, and a patient who sees each number as being tinged with a colour. If you’d like a preview of the man’s work, check out his talks on TED.com; he’s a gifted raconteur who has genuinely fascinating stories to tell. Richar Dawkins said that he “is a latter-day Marco Polo, journeying the silk road of science to strange and exotic Cathays of the mind.” 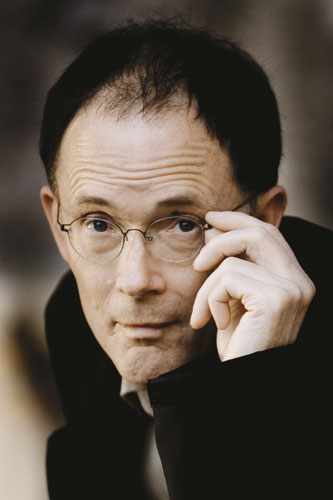 Image: Alessandra Benedetti/Corbis
8 William Gibson’s Zero History
Zero History is set in the same recognisable, contemporary world as Pattern Recognition (2003) and Spook Country (2007), unlike his earlier Neuromancer (the book in which he popularised the word ‘cyberspace’) and the rest of the Sprawl series, or his Difference Engine (with Bruce Sterling) or the Bridge trilogy. A critic wrote that Gibson has gone unplugged after Pattern Recognition. In Pattern Recognition one of the lead characters was allergic to certain kinds of fashion and corporate logos and in spook country an ex-rock band member, now journalist, investigates art subculture. Expect multiple plotlines and an exploration of the socio-cultural effects of technology, with neurotic/psychotic characters living in the reality of cyberspace.
9 Raghu Rai’s album on India’s classical music greats
Back in the 80s, Raghu Rai stunned everyone with his photo essays of Classical musicians for India Today. Those pictures captured the inner dynamics of singers like Mallikarjun Mansur, Bhimsen Joshi, S. Balachander, Hariprasad Chaurasia, Alla Rakha, Zakir Hussain and several others. The stunning pictures of Bhimsen Joshi with his face contorted with his effort to render ragas are some of the greatest ever shot. Music cannot be captured in print, but this master photographer’s effort comes close. Not surprising because he is a very keen listener of the art form.
10 Yann Martel’s Beatrice and Virgil
Canadian writer Yann Martel stunned everyone with the allegorical Life of Pi. It’s after an eight-year gap that we’re seeing a new book from him. This is what Amazon has to say about the novel: “A famous author receives a mysterious letter from a man who is a struggling writer but also turns out to be a taxidermist, an eccentric and fascinating character who does not kill animals but preserves them as they lived, with skill and dedication — among them a howler monkey named Virgil and a donkey named Beatrice”. Intriguing.
11 A series on Kulwant Roy’s photo archives
Kulwant Roy was a great photographer whose work on pre-partition India had, until recently, been thought lots in time. Now, Aditya Arya, who Roy gave his entire archive, his making that work public, first by doing an exhibition, and through this book. The picture of Gandhi and Jinnah arguing — or the one with Gandhi inspecting a guard of honour of the Indian National Army — those alone should be worth the the price of the book.
(Compiled by: Pravin Palande, Neelima Mahajan-Bansal, Peter Griffin, Saumya Roy, Shishir Prasad)

Tweets by @forbes_india
7 Meals to Die For
The Barefoot Economist