There are three types of economists: Academics who bury themselves in research reports, activists who campaign hard. And Jean Dreze

Call Jean Dreze at Allahabad’s Gobind Ballabh Pant Social Sciences Institute and chances are receptionists will not know who he is. Email the well known economist by his name and you will get the same result. That is because the Belgian-born, naturalised Indian’s email user name is “jaandaraaz,” the popular mispronunciation of his French name.

His email is only symbolic of the Indian identity Dreze adopted seven years ago. Since he came to India three decades ago, India’s development issues have consumed Dreze in a way that not only has he done academic research on hunger, famine and its failing primary education system but also stepped out of academia in to being an activist and campaigner for these issues. 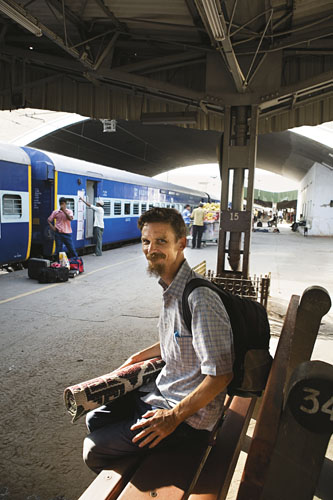 Image: Madhu Kapparath for Forbes India
The architect of the National Rural Employment Guarantee Act
Dreze has cycled through several states, staged dharnas and mounted public interest litigations in a role that blurs the boundaries between academia and activism and stops at nothing to push the agenda of development.
That Dreze is not your regular economist who buries himself in mountains of paper has been evident many times. Ganga Bhai, a tribal man from Chhattisgarh’s heavily forested Surguja district, realised this in their first meeting.
The two were riding on a motorcycle through slushy, thick forest, having gone to research the area’s starvation deaths in 1993. It was dark and raining, and they had lost their way. Eventually their bike skid and they fell. Dreze got up and asked Ganga Bhai to ride the bike himself so it would be easier to maneuver while he ran alongside. Dreze ran for about two kilometres in ankle-deep water before they found shelter in a potter’s house.
Over the last couple of decades, Dreze has crisscrossed between being an academic who drafted the National Rural Employment Guarantee Act (NREGA) and his activist role to ensure these policies work. In the process, he has become a one-of-a-kind academic activist to campaign for, write, critique and fix India’s welfare policies.
Dreze, 50, first came to India with his well-known economist father, Jacques Dreze. He had studied mathematical economics at the University of Essex but then moved to India for his Ph.D at
the Indian Statistical Institute and with Nicholas Stern, the celebrated British economist known for writing the Stern Report on climate change.
And since he moved to Delhi, in 1979, Dreze started by living in a slum and fasting to know what the lives of people he wanted to research were like. Dreze became known and celebrated at the Delhi School of Economics campus, where he has taught for decades, for his skinny frame, straggly beard, reticent nature and limitless energy to step out of the school and immerse himself in his research and his subjects’ lives.
For instance, in a class on environment and development, Dreze talked about how he had noticed from his research in a village near Uttar Pradesh’s Moradabad district that at sowing time, every farmer would wait for other farmers to sow to ensure that they timed their sowing perfectly. In this waiting game, Dreze found, sowing got delayed by two weeks and the soil dried up. Dreze had brought game theory by way of UP’s farm problems to his classroom.
He became known for his research, with Amartya Sen, on hunger and development and later for co-authoring a report on the state of primary education in India’s poorest states, which showed that half of all Indians could not read or write and that many schools did not have roofs or toilets.
By 2000 though, Dreze, who did not speak to Forbes India for this profile because he says he does not believe in singling out individual achievement over team effort, seems to have felt the shortcomings of a purely academic approach. “In seminar halls in Delhi, or for that matter in London or Harvard, one hears all kinds of weird ideas that would never pass muster in an Indian village,” wrote Dreze in 2002 research paper called On Research and Action. This was after he had started working with Akal Sangharsh Samiti, a group of organisations working with drought affected people in Rajasthan.

“I discovered… that my painstakingly accumulated academic baggage was not always useful as I had expected in this venture,” Dreze says, while writing about his work with the Akal Sangharsh Samiti, in that same research paper. Even the “insights” of his well-known research on hunger and famine with Amartya Sen were “fairly obvious” to the affected people, Dreze realised.
And on the National Advisory Council, a body of experts meant to ensure the UPA government’s agenda was being met, Dreze the activist seems to have married Dreze the academic. His interests matched the Left supported governments and Dreze was asked to write the National Rural Employment Guarantee Act, which says the government has to provide manual labour work, at minimum wages, to anyone who asks for it within two weeks. Dreze had written the NREGA for the Rajasthan government, as a relief measure for the drought.

There it got subsumed by the assembly elections where Congress-led government lost but the Congress promised it in the national elections instead and with the UPA’s surprise win, in 2005, NREGA became the government’s flagship welfare programme.

But by this year the gaps in implementation were being talked about and Dreze found himself leading a dharna to the Latehar district’s Deputy Commissioner asking for non payment of dues.
He organised a Lok Adalat but when he found it not working, Dreze got off the stage and led the Dharna instead. Not surprisingly, in June, the Jharkhand government paid a compensation of over Rs 5 lakhs for delayed wage payments to around 250 odd workers.
But for a man with boundless energy for his activist and academic careers, Dreze is known to be famously reticent. On most personal questions, such as where his love for India stems from, even his closest associates say “we never really asked.” Dreze, with his deep-set, blue eyes, is known as a patient listener and laser focused researcher. He is always at work and remains shy off it.
But according to Reetika Khera, a former student of Dreze and member of the Right to Food Campaign, Dreze chose India because of the immense scope for development work as well as the democratic and free framework under which the country functions. What is known is that Dreze, who is one of five brothers, has adopted a deeply Indian personality along with his Indian passport and wife.
“He is very Gandhian in his outlook. He generally sleeps in his office or else he is on the field, staying with the villagers,” says Biraj Patnaik, principal advisor to the Supreme Court appointed Commissioners on Right to Food.
For the last few years, Dreze’s large pieces of research have given way to his advocacy on NREGA and the right to food campaign, which stems from his involvement with the Akal Sangharsh Samiti. Dreze is closely involved with a coalition of organisations campaigning for the government to bring legislation to ensure food security. This year after the UPA returned to power, with a promise of giving 25 kilograms of rice to poor families at Rs.2/kg, Dreze, along with others campaigners, wrote a draft of the ambitious Right to Food bill. The 95-page draft, expanded the UPA’s promise along with other provisions that would ensure meals for children, pregnant women, older people among others.
But after an eight-year-long battle to get food security, the organisations tugged in disparate ways and asked for a broader agenda. Eventually, the draft was altered to include several clauses, including one that said that the government should encourage the growing of millets rather than genetically modified foods and that subsidised food should be made available in larger quantities to people above and below the poverty line.
While some campaigners say the right to food movement, which includes some of India’s best-known social organisations, has come as far as it has because of its stomach for internal debate. It is now campaigning for the revised bill although some organizations say the initial draft would be more practical to implement, especially given that the government is now said to be dragging its feet over this.
But Dreze seems to have taken this in his stride and was at a rally pushing for the bill recently. “That is his nature. He is very patient and does not get discouraged easily. If he thinks it is worth fighting for, he can be very persistent,” says Khera. “He understands that it is team effort and does not want anything to harm the campaign.” Dreze, of course, told Forbes India he is “suspicious” of profiles and any kind of personal limelight.
What he seems to love best is hanging out in some part of India where development has taken a bypass. “Unlike officials and politicians, Jean is not a burden on the poor villager he visits. That’s why people welcome him and trust him with their struggles. Neither is he a slave of his own opinion. Instead, he listens to them,” says Ganga Bhai.
That jog of Jean Dreze still continues but here is a small instance that proves that he has made a huge difference. In 2001, Dreze’s father, with whom he first came to India, was over and lectured at the Delhi School of Economics (DSE), where Dreze Junior is an honorary professor. Jacques Dreze is a noted economist for his work on economic decision under uncertainty. His paper on the Dreze Equilibria is considered a major contribution to this field. Naturally then the head of the department of DSE read through all such accomplishments of Dreze Senior and invited him to speak. Dreze started off by saying the HoD had forgotten to mention “his greatest contribution to economics”. It was, of course, only said half in jest.