7 Meals to Die For

1 @ Sheetal, Matunga, Mumbai
For all practical purposes, this is perhaps Mumbai’s best kept secret. The connoisseurs haven’t discovered it yet and no reviews have been written of the place either. That is because by the time you read this, the restaurant will be all of just a month old.

But first a bit of background on the place. Located on T.H. Kataria Road in Matunga (West), this place first opened close to a year ago as a Malvani restaurant. The most charitable thing anybody could say about the place is that it was mediocre. A couple of weeks ago though, a Konkani gentleman who goes by the name Shaukatbhai took over the place. 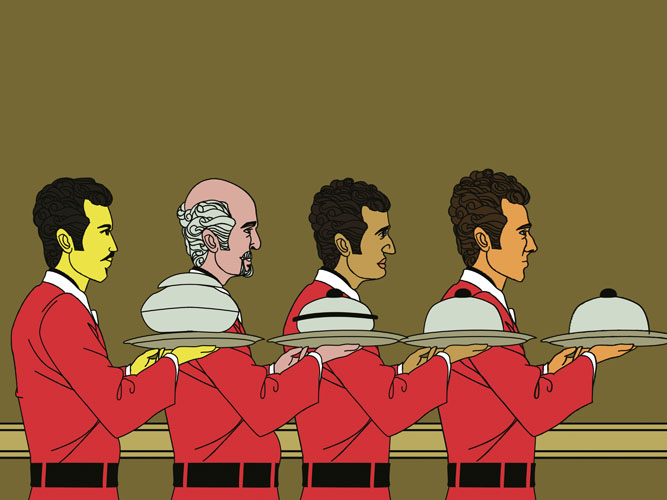 Image: Vidyanand Kamat
Owner of a couple of fishing trawlers and has been in the seafood business for as long as he can remember. To that extent, think of his diversification into restaurants as “forward integration”.
So what do you ask for at this restaurant? We recommend the tandoori prawns or prawns masala and fish fry to start with. Now, here’s the trick. The masalas are hand pounded and used sparingly. It refuses to overwhelm the food, quite unlike that abomination called butter garlic crab at Trishna – the standard bearer of sea food in the city.
Next, ask for the kapri Pomfret, both the fried and curried variants. We can’t think of enough superlatives to describe how good the damn thing is. Add a portion of his signature mutton curry and bajra rotis to go with it. We are sure that you’ll fall in love with the place. Our word: If you don’t like what you eat here, we’ll foot your bill.
2 @ The ferry that takes you to Coconut Lagoon in Kumarakom, Kerala
You’ve heard of the Coconut Lagoon. What you perhaps don’t know of is that at the ferry which takes you to Coconut Lagoon, there’s a shack. It isn’t called anything in particular. Just one of those places that the locals frequent. Before you hop on to the boat and head out, take an hour off to have a no-nonsense lunch served on banana leaves. Ask for the Karimeen Polichathu and Chemmen Ularthiyathu. The former, black spotted pearl fish, marinated in some gentle spices, wrapped in banana leaves again and steamed. The latter, medium sized prawns marinated with just a dash of turmeric, chilli and coconut oil after which it is tossed into a sauté of tomato, garlic, shallots, curry leaves, chilli powder and salt and cooked lightly in an earthen vessel. Goes best with rice of tapioca. Follow it up with a round of toddy. Just make sure it’s fresh. Which means, it ought to be have been tapped in the morning, and had before noon. Pass anything after that, unless you really, really trust the guy.
3 @ Haaji’s on the base of Buland Darwaza in Fatehpur Sikri
The meal we’re recommending here is Akbari Naan with mutton curry. This meal isn’t for the faint hearted or a calorie counter.
The naan itself has four eggs in it, besides loads of ghee and butter added for good measure. It is extraordinarily heavy, flaky and tastes outstanding on its own. What’s more, the mutton curry is cooked using only the raan (hind leg) and seena (shoulder). And no, boneless variants aren’t available here.
While they don’t use chillies in the preparation, the spices makes it decently hot. And if it were not so, you wouldn’t enjoy the rich naan. We don’t know of any other restaurant in the country that makes this anymore. If you do, please write to us immediately.
4 @ Wasabi, Taj Mahal Palace Hotel, Mumbai
Popular history has it that the carpaccio was invented at Harry’s Bat in Venice. The aim was to serve raw beef and that can be made edible only if slices are kept thin and absolutely fresh. This is why one gets the feeling that the sashimi “cut” of the carpaccio works better on fish. At Wasabi the carpaccio can be salmon, snapper or Chilean sea bass. Since the sea bass’ Latin American rhythm have a better beat than the techno-funk of the Norweigian Salmon, prefer the sea bass. Sea bass is mild in flavor but the citrusy Ponzu sauce gives it that liveliness the dish needs. The experience is light and subtle. Great food to have over a good conversation.
5 @ Kritunga, Madhapur, Near HiTec City, Hyderabad
Andhra Pradesh is divided over the Telengana issue. Amid all the dissent, let us talk of a few things that will unite the people there. Topping the charts is ragi sankati (also called ragi mudda) with searing mamsam pulusu. Ragi or finger millet is incredibly nutritious food, high in calcium and proteins and low on carbs. But understand one thing, Kritunga’s food is for the glutton, not for weight watchers. Back to Ragi. The Sankati is a dough-like preparation and is fairly mild in taste. It acts as an excellent backdrop for the fiery mamsam pulusu. This Rayalseema food combination is one thing that people from Telangana as well as Coastal Andhra swear by. After this what you need is some sweet respite. Go for Reku bkasham and baksham charu combination. It is like the Maharahstrian Puran Poli and charu is a sambar made from the filling of the Roti. Beware though, after this meal you will need a siesta to perform ordinary everyday tasks.

6 @ Graze, Taj Residency, Bangalore
This has a tinge of nostalgia to it. Because while they serve pan-seared John Dory with olive mash and chive voleoute at this restaurant, it isn’t as good anymore as what it used to be in 2007. Citizens of the city still remember the dazzling pearl-white colour of the fish, the way each layer of flesh literally slipped over each other as their knife cut through it, and the delicate, sweet, crab-like taste of the fish itself.
Once known as Saint-Pierre after a Christian legend involving St.Peter, the John Dory is a menacing looking deep sea fish from the but blessed with a delicate yet firm flesh inside that is best served as simply as possible.
7 @ Pan Asia, ITC Grand Maratha, Mumbai
Chef Liang who oversees this restaurant is from Beijing. And he lives up to all the clichéd images of what a chef ought to be like. Funny, mildly plump and by God, he makes some pretty amazing food. Call for the Peking duck and pancakes to start with. Follow this up with a portion of honey roasted pork. Round it off with Gyu (Japanese beef) and make sure you ask for the mixed Teppan rice. After that, just roll over and die.