A Look Back: Why Infosys Needs K.V. Kamath

It was clear that N.R. Narayana Murthy's successor would have to be a bold risk-taker. We bet on K.V. Kamath and got it bang on 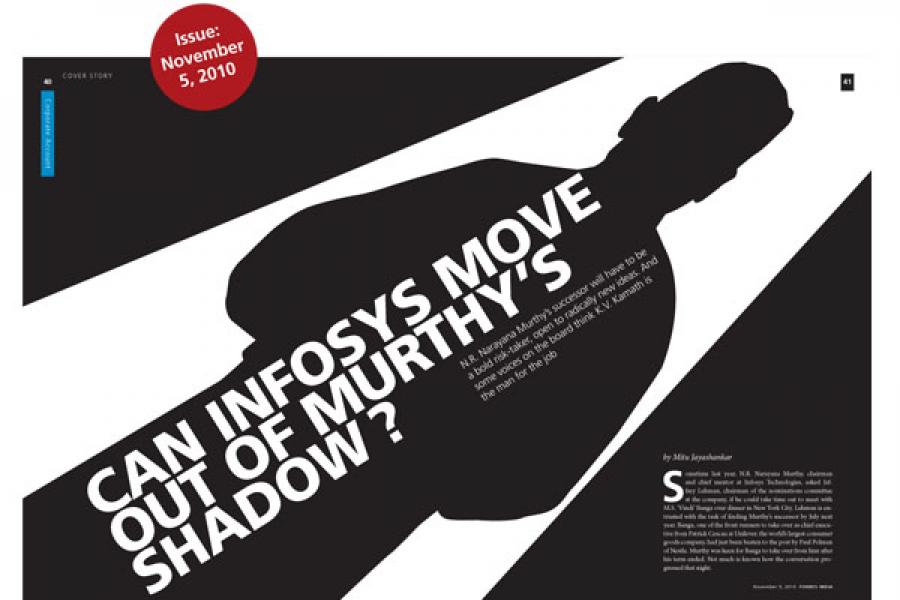 WHY WE DID THE STORY: This was our second cover on Infosys and was written at a time when speculation was raging over who would be the next chairman of the company. N.R.N. Murthy had announced he would retire in August 2011 and the nominations committee had little more than a year to find his replacement. The odds were heavily stacked in favour of K.V. Kamath. No one at that time knew what Kamath would do when he came in. There were signs that Infosys was slipping from its pedestal as the bellwether stock.

Outwardly there were no signs of trouble, Infosys was growing and was still the most profitable company in the sector. But internally a debate was raging — how long will Infosys conform to the Murthy doctrine? How long were the founders going to hold operational roles?

It took me almost three months to figure all this out. Forbes India Editor Indrajit Gupta and Executive Editor Charles Assisi went over several versions of the draft. Gupta spent hours discussing the story with me, never giving up on the idea. What he taught me was a valuable lesson. He said, ‘You cannot always use past data to analyse future events. Infosys was and is a great company, but the question really is — Will it remain a great company?’

(You can read this story here)

WHERE THE STORY STANDS: On April 30, as soon as I heard that Kamath was indeed going to be the next chairman of Infosys, I immediately sent a message to Gupta — pat on our backs.

We got many things in the story right — Kamath’s appointment, Mohandas Pai’s decision to leave the company, Murthy staying on as chairman emeritus and S.D. Shibulal’s appointment as the next CEO. What we didn’t get right was how much Kamath would be able to achieve as an independent chairman. The board’s decision to announce two chairmen instead of one will surely limit Kamath’s free will.

Tweets by @forbes_india
Financial Decision Vs. Investment Decision In The Telecom Sector, What Is First?
Satyajit Das: Double-edged Dollar