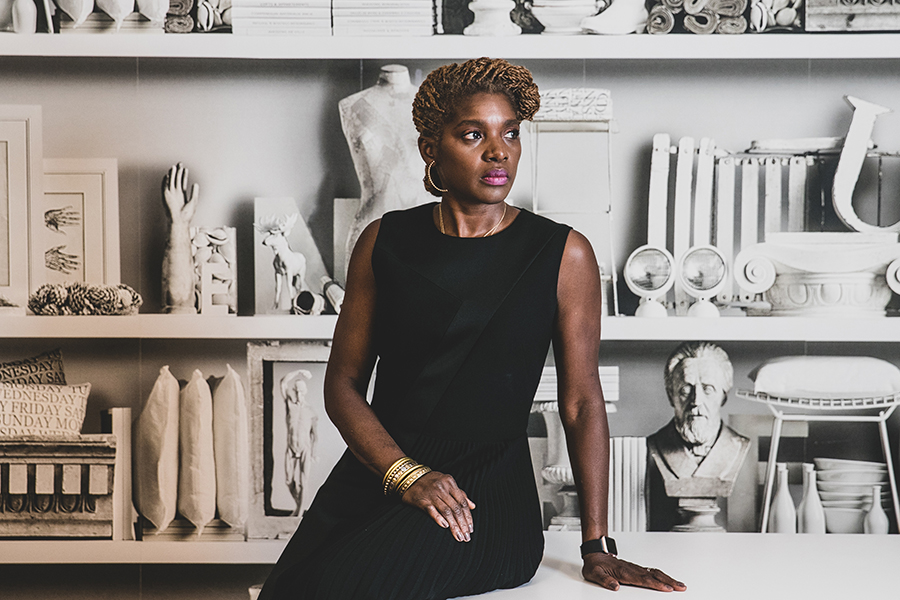 The advertising executive Deidre Smalls-Landau at her office in New York, Oct. 24, 2019. “We need to create a culture of belonging,” said Smalls-Landau, “where you don’t feel like you’re tolerated, but celebrated.” (Jeenah Moon/The New York Times)

The empowerment of women was a major theme of Advertising Week, a yearly gathering of roughly 100,000 ad-industry people in New York. The female R&B group TLC kicked off the program with a concert called “Future Is Female,” and there were panel discussions with titles like “Mom Bosses,” “#RewriteHerStory” and “Time’s Up, Pay Up: We Will Not Wait 100 Years.”

The focus on women at the September conference ignited hope that the industry had learned something from the #MeToo movement. Then came closing night, with rapper Pitbull taking the stage to perform the hit “I Like It.” Female dancers in revealing bodysuits surrounded him as he sang, “I ain’t playing with you, but I want to play with you.”

For ad executive Heather DeLand, the Pitbull show was a sign the industry had not really changed. “Who thought this would be a good idea?” she told The New York Times. “Is this a tacky 2019 reboot of ‘Mad Men’?”

She was far from alone in thinking that the industry had not quite broken with its sexist past. Despite frequent criticism of gender imbalance in ad campaigns and the departures in recent years of several high-profile advertising executives, the business still rewards male executives who encourage or excuse inappropriate workplace behavior, and commercials promoting stereotypical images of women have not gone away.

A number of agencies have tried to address the concerns by signing on to diversity initiatives meant to improve gender and racial representation in ad campaigns and in the workplace, but their attempts have clashed with a workplace culture still fueled by testosterone and booze.

Creative teams are still led overwhelmingly by men, and women make up a third of chief marketing officers, although women and men join the industry in equal numbers, according to the trade groups She Runs It and the Institute of Practitioners in Advertising. The gender pay gap in marketing exceeds the average across other industries, according to Glassdoor.

Ad agency TracyLocke, which has done work for Pepsi and rum brand Captain Morgan, signaled it wanted to set itself apart by promoting “Feminist Fridays” on its social media accounts and hiring female illustrators to create portraits of famous women for a series called “Making Herstory.” But according to Karen Dunbar, who spent nearly three years in the Connecticut office as a freelance creative director and copywriter, it remains an uncomfortable place for women.

In a discrimination lawsuit filed against TracyLocke in June, Dunbar said her male colleagues called her a “nagging wife,” suggested taping her mouth shut, threw papers in her face and rubbed her back in view of colleagues. She also accused Hugh Boyle, the chief executive, of encouraging “male managers and subordinates to incorporate” a vulgar term for female genitalia “into their workplace dialogue.” (The suit has not been resolved.)

Teresa Brammer, the agency’s chief human resources officer, said that Dunbar’s accusations were found by external investigators to be without merit, adding that “there is no higher priority than creating a safe, fair and equitable workplace for our associates.”

Women at other agencies, even those that have created high-profile campaigns promoting diversity and equal treatment of men and women, said they still experienced the sexist treatment depicted on “Mad Men.” They described an industry steeped in “bro culture,” saying they are given nicknames like “the face” and “the body” and routinely passed over when it comes time to select who goes to conferences. Like their female predecessors from decades ago, they find themselves stuck on accounts for jewelry and beauty products.

Kate Catalinac, a creative director at BBDO, an international agency with headquarters in New York with clients including Alka-Seltzer, Ikea and Macy’s, said that a man working on the same account at another agency once told her he intended to rape her. She also recalled a client who offered her new luggage in exchange for sex. And she said she was asked “countless times” to arrange for coffee service during casting sessions by people who assumed she was not in a leadership role.

“Honestly, I have not seen change,” said Catalinac, who has worked in advertising 14 years.

Molly Dunn, a freelance brand strategist, said her 20-year career had been marked by repeated episodes of harassment, discrimination and retaliation. “Part of the problem with advertising is that there’s cachet in being like, ‘We’re all so cool, everyone’s OK with jokes about ridiculous things,’” she said. “It’s a lot of creative people, a lot of big egos, and there’s a huge allowance for bad behavior.” 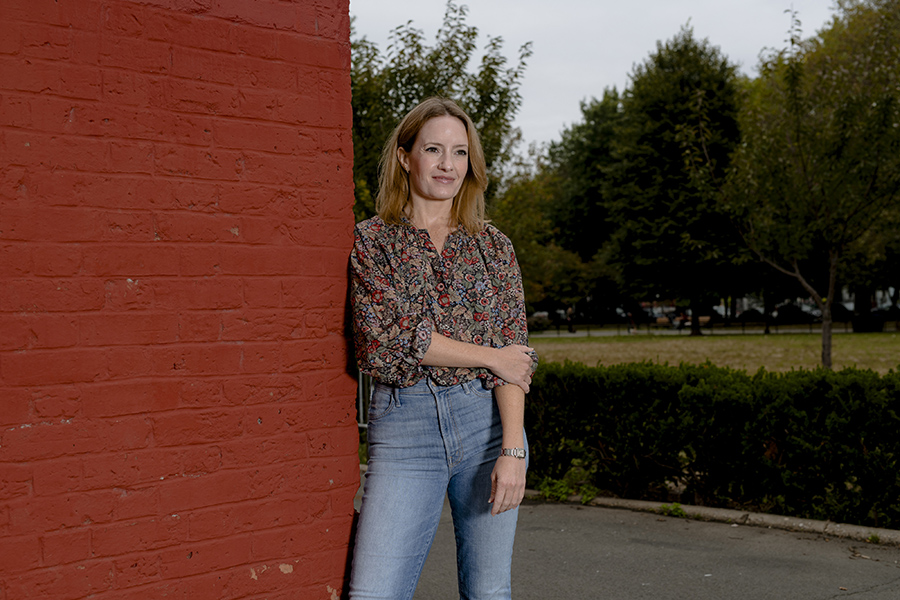 Molly Dunn, a freelance brand strategist, who said her 20-year career had been marked by repeated episodes of harassment, discrimination and retaliation, in New York, Oct. 12, 2019. Campaigns promoting female empowerment are all the rage — but women in advertising say they still have to navigate “Mad Men” workplaces. (Caroline Tompkins/The New York Times)

Dunn said she was working in New York this year at Anomaly, an agency whose clients have included Coca-Cola and Beats by Dre, when she received an emailed invitation to a meeting in a space described as the “Taint Table.” “Taint” is slang for the perineum; the space linked two parts of the Anomaly office. Two other women, who described their experience at Anomaly on the condition that their names would not be used out of fear of professional repercussions, confirmed that people in the company used that term for the meeting space.

Anomaly, headed by a woman with a leadership team that is nearly 80% male, started an initiative last year called Unreasonable Equals. The goal: to improve gender equality in marketing and product design.

Late-night host Stephen Colbert noted that “female drinkers everywhere will say, ‘Finally, a brand that’s condescending to me,’” and actress Caitriona Balfe joked on Twitter that the whiskey was intended to be consumed “whilst sitting on a lady chair, in a lady room, which is part of a lady house, in a lady city, on a lady planet.”

Dunn said she believed her complaints about her colleagues’ use of the term “taint table” led Anomaly to end her contract early.

Karina Wilsher, the agency’s global chief executive, said in an email that Dunn’s contract “ended amicably, but came down to underperformance.” She added, “In the agency world today, there can often be noise and discontentment. Much of it is incredibly well-grounded and motivated by a genuine desire to advance the industry. In this case it is not.”

Wilsher conceded that the slang term for the meeting area was used by certain employees, but said it was not an official name. In June, Anomaly’s executive chairman, Carl Johnson, sent an email to employees telling them to avoid “stupid, offensive slang for meeting areas.”

In Richmond, Virginia, the Martin Agency, known for its Geico commercials, tried to reinvent itself after its longtime chief creative officer, Joe Alexander, left in 2017 amid reports of an investigation into accusations of sexual harassment. The agency brought on its first female chief creative officer, Karen Costello, and first female chief executive, Kristen Cavallo, in its 53-year history.

“Obviously, there is a need for a new direction,” Cavallo said in a statement at the time. The agency has since said that it closed the wage gap between male and female employees and doubled the number of women on its board.

Alexander, the departed executive, has fought back, filing defamation lawsuits naming, among others, the Martin Agency and Diet Madison Avenue, an Instagram account that posted anonymous reports of sexual misconduct in the industry.

As ad agencies try to shed their sexist legacies, they are under pressure from some major clients to have more diversity in their ad campaigns and on their staffs. At the same time, some women have said that routine exposure to sexist workplace behavior caused them to leave the business.

Karen Kaplan, the chief executive of Hill Holliday, an agency based in Boston that has worked for clients including Bank of America, said the industry would continue to lose talented women if it did not change. 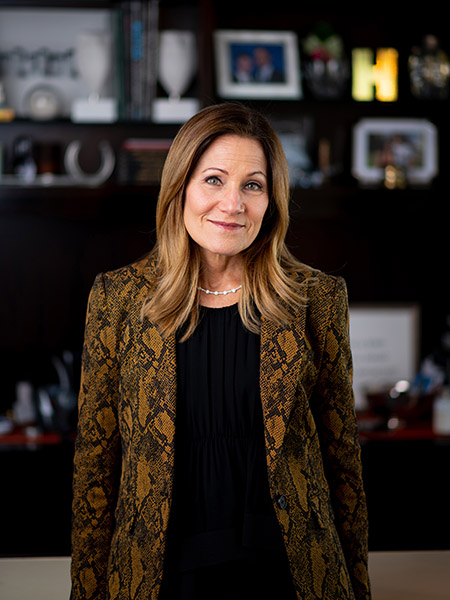 Karen Kaplan, the chief executive of the ad agency Hill Holliday, at her office in Boston, Oct. 23, 2019. Campaigns promoting female empowerment are all the rage — but women in advertising say they still have to navigate “Mad Men” workplaces. (Ian MacLellan/The New York Times)

“We lost a lot of talent because of equity issues, and they don’t want to deal with that behavior again,” Kaplan said. “If we want to get them back, we are going to have to be very sensitive to what drove them out of the business to begin with.”

More than 20 agencies have sought certification from the 3% Movement, an organization that rates advertising companies on factors like turnover ratio by gender, parent support services and depiction of gender in ad campaigns.

Only seven agencies have passed, according to Kat Gordon, the organization’s founder. But one metric has improved in the past decade, she said: The number of women in top executive roles has “seen a dramatic uptick.”

Deidre Smalls-Landau is one of them. In August, she became the chief marketing officer in the United States for marketing and media agency UM, which has created ads for Hulu and BMW.

“I would not say it’s been easy — I’ve almost always been the only one,” she said of being a black woman in a heavily white and male industry. “And when you’re the only one, you develop a very tough skin.”

Recently, Smalls-Landau said, there has been a “concerted effort” to improve diversity in advertising. UM is now 65% female, with more than 40% of its senior roles filled by women.

“We need to create a culture of belonging, where you don’t feel like you’re tolerated, but celebrated,” she said.

Mara Lecocq, who has worked in advertising for 13 years, said she started a database of female advertising workers called Where Are the Boss Ladies after realizing that she had never had a female supervisor.

“Agencies are giving us diversity inclusion initiatives,” she said, “but in a meeting, men will still talk over you.”