As the global art world prepares to descend on Miami next week, a guide to the highlights of what's on display 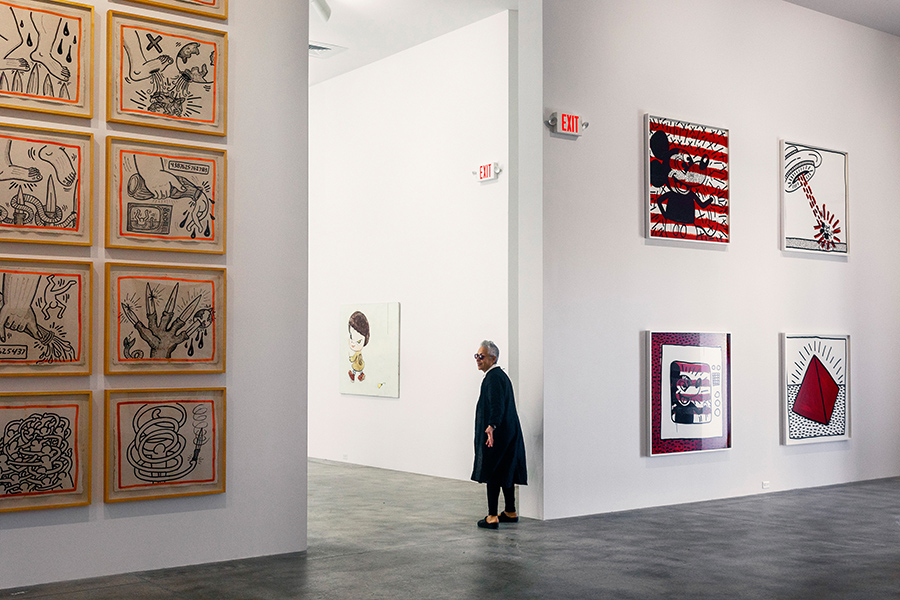 Mera Rubell with artwork, as seen on Nov. 16, 2019, at the new Rubell Museum in Miami, which houses her and Don Rubell's private art collection, ahead of the upcoming Art Basel fair. On the center wall: Yoshitomo Nara’s “Hyper Enough (to the City)” (1996). At left and right: Keith Haring's “Against All Odds” (1989) and four untitled pieces from 1981. (Rose Marie Cromwell/The New York Times)

MIAMI BEACH — As the global art world descends on South Florida for next week’s Art Basel fair, which is celebrating its 17th anniversary, it’s worth remembering how truly small the art world once was.

As late as the 1980s, you could fit contemporary art’s A-list players all in one room. And the room in question often belonged to the prominent collectors Don and Mera Rubell — inside their Manhattan town house, then the de facto after-party place for the Whitney Museum of American Art’s career-launching biennials. “We knew every collector in the world then,” Don Rubell recalled with a chuckle. “Ninety percent of them were in New York or Germany.”

Richard Prince was a fresh arrival to the Rubells’ after-party in 1985, having made his biennial debut that year with his signature photo appropriations. He would later write of his nervous excitement at threading his way into their gathering, past the reigning enfant terrible Robert Mapplethorpe, and spying his own artwork there. “It was the first time I’d ever seen anything of mine hung on someone else’s wall,” an awed Prince remembered. “I was still an outsider but that evening I felt, if only for a moment, part of another family.”

That family of artists, museum directors, curators and collectors is now exponentially larger, with far more money, and far more rungs of status up for grabs. But the Rubells are just as keen on occupying its center stage as they were in 1993, when they purchased a 40,000-square-foot warehouse for their collection in the Wynwood neighborhood of Miami. They later became instrumental in wooing the Swiss-based Art Basel fair to begin a Miami edition. 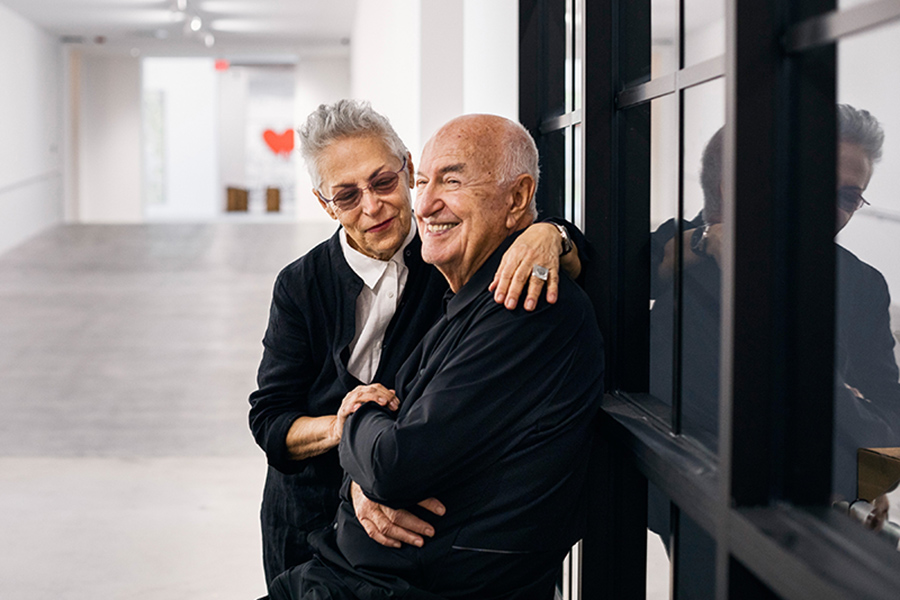 Mera and Don Rubell at the new Rubell Museum, which houses their private art collection, in Miami, Nov. 16, 2019. As the global art world descends on the 17th Art Basel fair, it’s worth remembering how truly small the art world once was: As late as the 1980s, you could fit contemporary art’s A-list players all in one room, and the room often belonged to Don and Mera Rubell. (Rose Marie Cromwell/The New York Times)

Now they have enlarged the showcase for their 7,200 artworks. Opening Wednesday, the Rubell Family Collection, re-christened the Rubell Museum, fills a 100,000-square-foot campus just west, in the new art neighborhood of Allapattah — a gritty mix of warehouses, hospitals and modest homes. The Annabelle Selldorf-designed complex includes a restaurant, bookstore, event space, outdoor garden, and not least, contemporary art holdings that overshadow that of any other South Florida institution.

Allapattah’s cheaper real estate beckoned: The Rubells bought their new museum’s lot for $4 million, and a similarly sized lot across the street for $8.6 million. Several developers have also moved into Allapattah, mirroring a pattern of gentrification that saw property values skyrocket in Wynwood (and forced artists out). While Mera Rubell insisted this move wasn’t simply about flipping properties, she admitted “the appreciated value of the Wynwood space is why we can now do all this.” Valued by Miami-Dade County at $12 million, its planned sale is likely to fetch upward of twice that.

The family still runs the same nonprofit organization to exhibit their collection, which is open to the public five days a week. So why now call it a museum? “It’s about what we want to step up to,” Rubell said. “I meet people who say to me ‘I always wanted to come, but I didn’t know how to get an invitation.’ Here we are today, open to the public, doing all these exhibitions, and people still feel it’s not accessible. But everybody knows what a museum is.”

The Rubell Museum’s debut is “a hit parade of the last 50 years of contemporary art: Keith Haring, Jeff Koons, Jean-Michel Basquiat, Andy Warhol, Richard Prince, Cindy Sherman, all the favorites,” Mera Rubell explained. “If you’ve been scratching your head for the last 50 years saying ‘What the hell is all this crap?’, well that stuff is now worth $100 million. But never mind the money. We’re talking about the art that defined a generation.” So rather than dismissively rolling your eyes, she continued, “you can say ‘Wow, this is teaching me something about the world we live in’!”

That teachable lesson, for better or for worse, is on display throughout Miami next week. Below is a guide to the highlights.

Q: So how do I attend the Art Basel Miami Beach fair?
A: Staged annually inside Miami Beach’s Convention Center, entrance is as easy as buying a ticket on-site. (Although at $65 a ticket, it’s pricey window-shopping.)

Q: What exactly is the difference between Art Basel Miami Beach and Miami Art Week?
A: The Art Basel Miami Beach fair features 269 exhibiting galleries. Nearly two dozen satellite fairs have also sprouted. Add in pop-up shows, celebrity-studded product rollouts, as well as Miami’s own galleries and museums all putting on their best faces, and you have the circus that local boosters have taken to calling “Miami Art Week.”

Q: Two dozen satellite fairs, seriously?
A: Some, like Prizm and Pinta, focus on art made by the African diaspora and Latin Americans, respectively. NADA, or New Art Dealers Alliance, remains the fair on many itineraries for its emphasis on scrappy but influential galleries hovering just beyond Basel’s gatekeepers (and hoping to eventually breach the gate). The works here often offer an early look at tomorrow’s art stars. Another strong contender for Art Basel Jr. is the Untitled fair, whose galleries’ offerings tend to be a bit more thoughtfully gestated than much of NADA’s throw-it-all-against-the-wall-and-see-what-sticks aesthetic.

Q: What about Miami’s own artists?
A: A perennial sore point for local residents is the dearth of homegrown talent found within the Basel fair — only 3 of its 269 exhibiting galleries are based in Miami. Still, those three are exhibiting stellar natives: David Castillo will feature the playful assemblages of Pepe Mar; Central Fine is showing paintings by Tomm El-Saieh, whose hypnotic brushwork fuses Haitian folkloric traditions with classic abstract expressionism; while Fredric Snitzer’s booth is devoted to paintings by Hernan Bas, whose beguiling, homoerotically charged portraits of dandies and waifs remain some of the strongest work to emerge from Miami over the past two decades.

Q: Where can I see more local galleries?
A: Head to the Little Haiti neighborhood, the new ground zero for Miami’s most consistently impressive galleries — many of which were priced out of Wynwood as it morphed into an entertainment enclave. Start with Emerson Dorsch and its Color Field-steeped paintings by Mette Tommerup — but call ahead for performance times when Tommerup and her crew will be wrapping themselves inside her huge canvases and rollicking around the room. The Iris PhotoCollective ArtSpace is nearby, dedicated to socially engaged photography and run by Carl Juste, a Miami Herald photojournalist whose work never fails to dazzle. Nina Johnson is featuring new drawings by Terry Allen, and while his Lubbock, Texas, origins are anything but tropical, a rare opportunity to see his handiwork (and hopefully hear him perform some of his delectably barbed country songs) is too good to miss.

Q: What other neighborhoods should I visit for art?
A: Southwest of Little Haiti, in Allapattah, is Spinello Projects’ group show featuring Clara Varas, who begins her process with an abstract painting (often done on a bedsheet) and then adds all manner of found detritus from the city streets, amounting to sculptural Frankensteins that are fascinatingly more than the sum of their parts. Then head up to the Design District’s Paradise Plaza for the latest jab at the art scene by the Brooklyn artist Eric Doeringer, who first grabbed attention in Miami by creating “bootleg” Art Basel VIP cards (which let more than a few plebeians cross the velvet ropes). He’s since graduated to “bootleg” paintings, and his latest show features handcrafted Christopher Wool knockoffs priced at $1,000 each, several zeros cheaper than the real ones. It’s a stunt that works on both a conceptual level, wryly commenting on a blue-chip artist whose paintings already seem factory-made, and on a pleasurable one, offering Wool fans on a budget a chance to take home a tactile tribute: They may be fake Wools, but they’re genuine Doeringers.

Q: How about Miami’s museums?
A: Another year, another mogul making a splash with a new privately owned museum. This time it’s Allapattah’s El Espacio 23, exhibiting the contemporary collection of the real estate developer Jorge Pérez, whose name already graces the side of the partially taxpayer-funded Pérez Art Museum Miami. After concerns that Pérez would turn his attention to his new project — leaving taxpayers to make up the difference — he has publicly assured his namesake museum that it will not see any lessening of his financial support. Over on South Beach, two small institutions have consistently been punching above their weight: The Jewish Museum of Florida-FIU, which is featuring provocative photographs by Zachary Balber that blend Yiddishkeit with thug life, and the Wolfsonian-FIU, paying an 80th birthday tribute to its Willy Wonka-esque founder, Mitchell Wolfson Jr., who has spent a lifetime traveling the world hunting down remarkable historical curios.

Q: Enough museum-hopping, I need a break.
A: There’s a reason it’s called Miami Beach. Just a few blocks east of the Basel hubbub, the gently rolling surf of the Atlantic Ocean beckons. Bring a towel, stake out a quiet spot on the white sand and explore the fine art of doing nothing. Admission is absolutely free.

Tweets by @forbes_india
Global fitness enthusiast Arnold Vosloo talks about his fitness journey
Are there benefits to intermittent fasting?