The strongest speech came from 16-year-old climate activist Greta Thunberg; Prime Minister Narendra Modi said India would increase its share of renewable energy by 2022, without making any promises to reduce its dependence on coal

By Somini Sengupta and Lisa Friedman 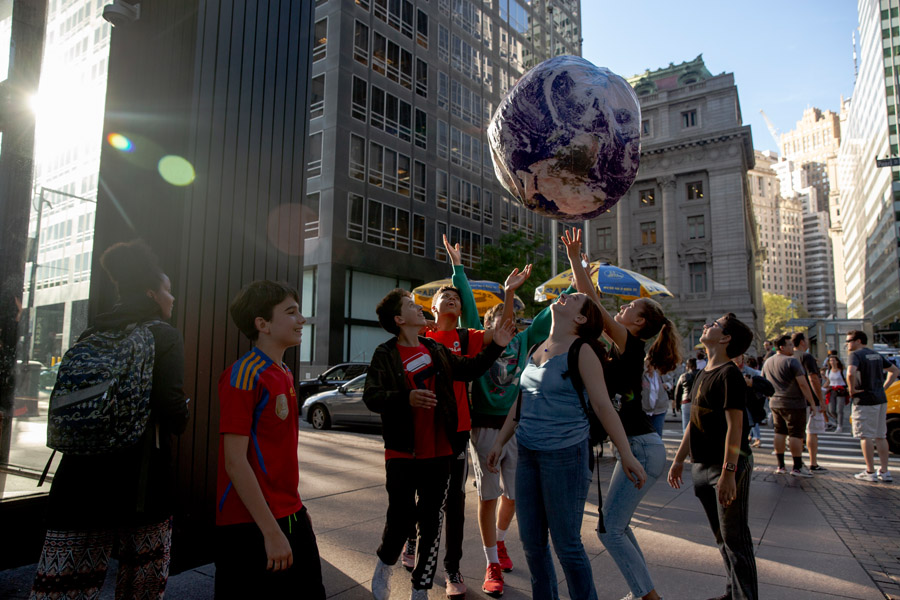 UNITED NATIONS — The U.N. Climate Action Summit on Monday was meant to highlight concrete promises by presidents, prime ministers and corporate executives to wean the global economy from fossil fuels to avoid the worst effects of global warming.

But despite the protests in the streets, China on Monday made no new promises to take stronger climate action. The United States, having vowed to pull out of the Paris Agreement, the pact among nations to jointly fight climate change, said nothing at all. A host of countries made only incremental promises.

The contrast between the slow pace of action and the urgency of the problem was underscored by Swedish climate activist Greta Thunberg, 16, who excoriated world leaders for their “business as usual” approach. “The eyes of all future generations are upon you,” she said, her voice quavering with rage. “If you choose to fail us, I say we will never forgive you.”

There were some concrete measures. U.N. Secretary-General António Guterres, said in closing remarks that 77 countries had announced efforts to achieve net-zero emissions by 2050, several asset fund managers said they would aim to get to a net-zero portfolio of investments by the same year, and dozens of businesses said they would aim to abide by the Paris Agreement targets.

The summit comes at a time when the latest science shows that the world is getting hotter faster and the dangers of global warming are increasingly clear, with more intense hurricanes, longer droughts and heat records being broken. It was an opportunity to show that the world’s most powerful countries could step up.

Advocates and diplomats who have been following climate talks for years said they were disappointed.

Andrew Steer, head of World Resources Institute and a former World Bank official, said most of the major economies fell “woefully short” of expectations. “Their lack of ambition stands in sharp contrast with the growing demand for action around the world,” he said.

The United States did not request a speaking slot at the summit, but President Donald Trump unexpectedly dropped into the General Assembly hall with Vice President Mike Pence in the late morning. Michael Bloomberg, the former New York City mayor who is now a U.N. special envoy for climate, welcomed Trump’s presence and addressed the president directly by saying, “Hopefully our discussions here will be useful for you when you formulate climate policy.”

That was followed by laughter and applause. It signaled a sharp contrast from just a few years ago, when the United States was credited with pushing other countries, including China, to take climate change seriously. The U.S. has said it intends to withdraw from the 2015 Paris climate accord. It is not on track to meet its voluntary pledges under the agreement in any case. And the Trump administration has rolled back a host of environmental regulations that were meant to curb greenhouse gas emissions from automobile tailpipes, coal plants and oil and gas wells.

A bit later in the day, Thunberg glared at Trump as he passed through a hall, a video clip posted on Twitter showed.

As for China, it did not signal its readiness to issue stronger, swifter targets to transition away from fossil fuels, as many had hoped. Wang Yi, a special representative for President Xi Jinping, noted that his country was keeping the promises it made under the 2015 Paris Agreement and that “certain countries” — a clear reference to the United States — were not.

China’s decision to not signal higher ambition reflects, in part, concerns about its own slowing economy against the backdrop of conflicts with the United States on trade. It also reflected Beijing’s reluctance to take stronger climate action in the absence of similar moves from richer countries. The European Union has not signaled its intention to cut emissions faster either, and the United States is nowhere on track to meet its original commitments under the Paris accord.

President Emmanuel Macron of France also had a message on trade for the United States, telling the assembly: “I don’t want to see new trade negotiations with countries who are running counter to the Paris Agreement.”

The statement could create a new stumbling block in talks between the United States and the EU for a free-trade agreement. Those negotiations are already complicated by deep differences over agricultural policy and threats by Trump to impose tariffs on automobile parts from Europe if the talks fail to make progress.

Prime Minister Narendra Modi of India said his country would increase its share of renewable energy by 2022, without making any promises to reduce its dependence on coal. Chancellor Angela Merkel of Germany promoted a new plan worth $60 billion over 10 years to speed a transition to clean power.

Russia announced that it would ratify the Paris agreement, but nothing more about how to cut emissions from its sprawling state-owned petroleum industry.

The summit unfolded against the backdrop of new data that showed the quickening pace of warming.

The world is getting hotter, faster, the World Meteorological Organization concluded in its latest report Sunday, with the five-year period between 2014 and 2019 the warmest on record. Emissions of carbon dioxide, a major contributor to global warming when it is pumped into the atmosphere, are at record highs. The seas are rising rapidly. The average global temperature is 1.1 degrees Celsius (1.98 degrees Fahrenheit) higher than what it was in the mid-19th century, and at the current pace, average global temperatures will be 3 degrees Celsius higher by the end of the century.

The speeches inside the green marbled General Assembly hall on Monday stood in sharp contrast to the anger that spilled onto the streets Friday, when masses of children and young people protested around the world. On Monday, protesters blocked traffic in Washington to demand a swift pivot away from the world’s fossil fuel-based economy. More youth protests are planned for later in the week.

Laurence Tubiana, a former climate negotiator from France, said she was struck by the fact that several leaders said they heard the message from young people in the streets. “Everyone said, ‘We hear you,’” she said. “But they are tone deaf.”