'Avengers: Endgame' shows movie theaters can still be on top of the world

Almost every multiplex on the planet was gridlocked over the weekend; "Avengers: Endgame" took in $1.2 billion worldwide 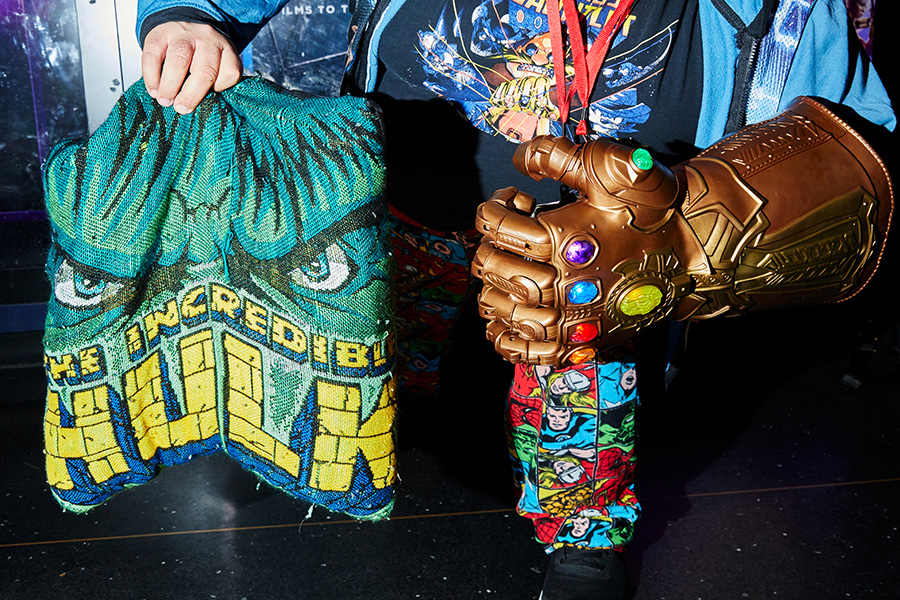 A fan at the opening night of "Avengers: Endgame" at AMC Lincoln Square in New York, April 25, 2019. The superhero movie — the 22nd in a series from Disney’s Marvel Studios — collected roughly $350 million in the United States and Canada, according to Comscore, which compiles box-office data. (Amy Lombard/The New York Times)

LOS ANGELES — Audiences have splintered into a million personalized subsets. Streaming services are sprouting like mushrooms. Attention spans are now measured in seconds.

For those reasons and others — a decade of stagnant attendance, studios that only seem to make sequels of sequels (of sequels) — movie theaters are seen as a dying business. Why trudge to a theater when Netflix is available in your pocket anytime you want?

Yet almost every multiplex on the planet was gridlocked over the weekend. “Avengers: Endgame” took in $1.2 billion worldwide, arriving as the No. 1 movie in at least 54 countries. The euphorically reviewed movie collected a record-breaking $350 million in the United States and Canada, zooming past “Star Wars: The Force Awakens” (2015), which had opening-weekend sales of $248 million, or about $270 million in today’s dollars.

“It shows the power of theaters — the ability, even in a hyperfragmented culture, to deliver that wildly big communal experience,” Megan Colligan, president of Imax Filmed Entertainment, said in an interview.

It also shows that Hollywood is increasingly reliant on spectacle to jolt people away from Facebook, Fortnite, Hulu and Netflix and into movie theaters.

All kinds of movies used to break through at the box office. In 1998, the top 10 grossing movies of the year included an Oscar-nominated war epic (“Saving Private Ryan”), three comedies, a couple of science-fiction extravaganzas (“Armageddon”), the comedic drama “Patch Adams” and a smattering of family films (“Dr. Doolittle”). Last year, there were no comedies and only one drama: “Bohemian Rhapsody,” which doubled as a musical. Big-budget fantasies and animated movies took up eight slots.

When the industry’s new strategy works, it works big.

Demand for “Avengers: Endgame” was so astronomical over the weekend that AMC Theaters, the largest multiplex operator in North America, added 5,000 last-minute showtimes in the United States, lifting its total number to more than 63,000. Nineteen AMC locations played the film around the clock. On Saturday alone, 2.3 million people turned up at AMC cinemas.

“Young moviegoers will remember where they were when they saw ‘Endgame,’ who they saw it with and what it felt like,” John Fithian, president of the National Association of Theater Owners, wrote in an email. “That will pay off for years to come in the same way that moviegoers who grew up in the ’70s and ’80s still talk about the impact that ‘Star Wars’ had on them.”

And there could be more to come.

Disney’s “The Lion King,” a retelling of the animated musical using photo-realistic visual effects, arrives in July and is generating runaway advance interest. In December, Disney will release “Star Wars: The Rise of Skywalker,” the final chapter in a nine-part saga. Also coming this year are giants like “Toy Story 4” (Disney), “The Secret Life of Pets 2” (Universal), “Spider-Man: Far From Home” (Sony) and “It: Chapter 2” (Warner Bros.).

Even so, concerns about the health of theatrical business are unlikely to abate, at least behind closed doors in Hollywood. In some ways, “Avengers: Endgame” could add to them.

People like Steven Spielberg worry that the film business is headed toward a bifurcated future where megamovies play in cinemas and everything else gets squeezed onto streaming-service screens. Given the film industry’s current trajectory, there could soon come a day when you can see popcorn movies like “Indiana Jones and the Kingdom of the Crystal Skull” in theaters but must watch more sober fare like “Lincoln” online — to take just two of Spielberg’s films as examples.

To that end, there is heated debate in Hollywood over what constitutes a movie. Should the Academy of Motion Picture Arts and Sciences try to protect the big-screen experience by blocking films — like Netflix’s award-winning “Roma” — that are primarily distributed on the internet from competing for Oscars? Last week, members of the academy board debated what to do, ultimately deciding to keep weighing the options.

Media analysts have also sounded alarms. Doug Creutz, a managing director at Cowen and Co., wrote in a report last month that “the market is concentrating into fewer, but bigger, successful films.” Creutz noted that the top 10 grossing movies last year accounted for 35% of total annual ticket sales. At the start of the decade, the contribution from the top 10 was about 27%.

“Avengers: Endgame,” which cost roughly $350 million to make and $150 million to market worldwide, played in 4,662 theaters in North America over the weekend. In another show of Marvel’s dominance, the No. 2 movie of the weekend was “Captain Marvel,” which took in $8 million at 2,435 theaters in its eighth week, according to comScore Inc., which compiles box-office data. The weekend’s third-best performer, the horror movie “The Curse of La Llorona” (Warner Bros.), collected about $7.5 million from 3,372 theaters.

Hollywood has long expected “Avengers: Endgame” to be a sensation. When tickets became available for presale on April 2, the demand crashed AMC servers. In addition to its own ads, which began running late last year, Disney secured promotional partnerships worth an additional $200 million. Ziploc started selling Avengers-themed sandwich bags; McDonald’s, teaming with Marvel for the first time, introduced 24 Avengers toys. 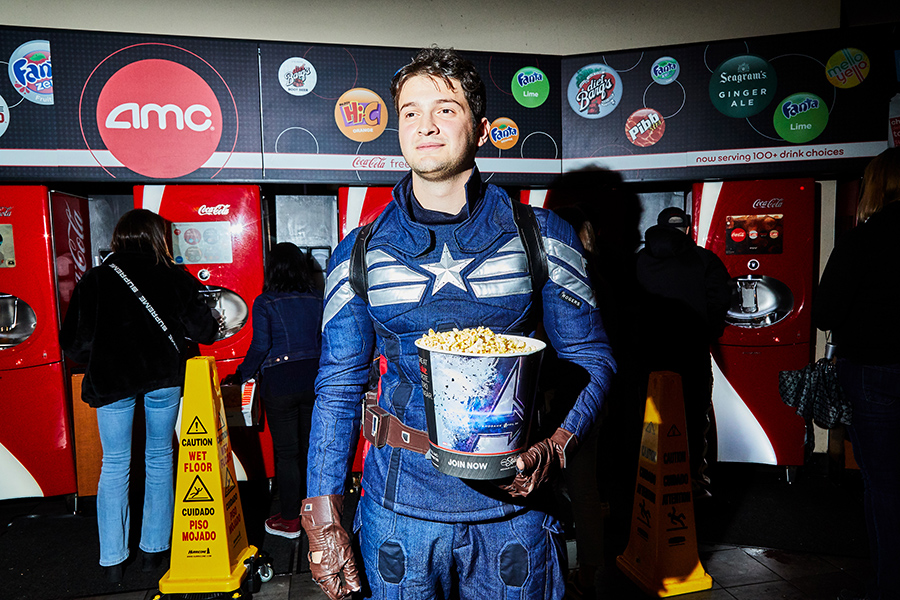 “We wanted it to feel like an epic, important, seminal, can’t-miss event,” said Asad Ayaz, president of marketing at Walt Disney Studios. Ayaz and his lieutenants devised a strategy in which Disney spent massively on television ads around a few important moments (the day tickets went on presale, for instance) and then went completely dark for a week or more.

“The idea was to stun and surprise people with new creative messaging and then leave them wanting more,” Ayaz said. The movie ended up defying all kinds of conventional wisdom — that sequels are not supposed to be critical darlings, that there is no center of the culture anymore, that marathon running times (three hours in this case) drive people away, that every studio has hits and misses. Marvel is now 22-0 when it comes to the box office.

Alan Horn, chairman of Walt Disney Studios, called the results “monumental” and noted that Marvel had challenged “the notions of what is possible at the movie theater.”

About 44% of the global total came from 3D screenings, according to the technology company RealD. Disney said Sunday morning that the movie set a record for the largest opening weekend in 44 overseas markets, with Imax theaters contributing an outsized portion of ticket sales, particularly in China.

Ticket sales for “Avengers: Endgame” were assuredly helped by improvements that multiplex chains have introduced in recent years. For instance, after the subscription-based ticketing service MoviePass proved to be popular with millennials, AMC and other theater operators created their own subscription programs. Apps like Atom Tickets and Fandango have made buying tickets in advance more popular, which helps to create buzz and reduce the need to wait in line at box-office windows.

But the movie, directed by Anthony and Joe Russo, arrived as a cultural and commercial thunderclap because of the expert way in which Kevin Feige, Marvel’s president, built the “Avengers” series to a storytelling climax. In the last installment, “Avengers: Infinity War,” a lantern-jawed villain named Thanos (Josh Brolin) snapped his fingers and turned half the creatures in the universe to dust, including a vast number of superheroes. “Avengers: Endgame” finds battered survivors like Iron Man (Robert Downey Jr.), Thor (Chris Hemsworth), Captain America (Chris Evans) and Black Widow (Scarlett Johansson) joining together in one final attempt to restore order.

“It is likely to be the last film with the original — and beloved — Avengers cast,” Creutz said.

If so, plenty of people made sure they were there to see it. And they appear to have been satisfied: In CinemaScore exit polls, ticket buyers gave the film an A-plus grade.

Tweets by @forbesindia
Mobileground India: The Chinese invasion
What makes a great manager?