The thousands who fled Bangalore to Northeast have left behind not just deserted neighbourhoods, but a marred image of a cosmopolitan city 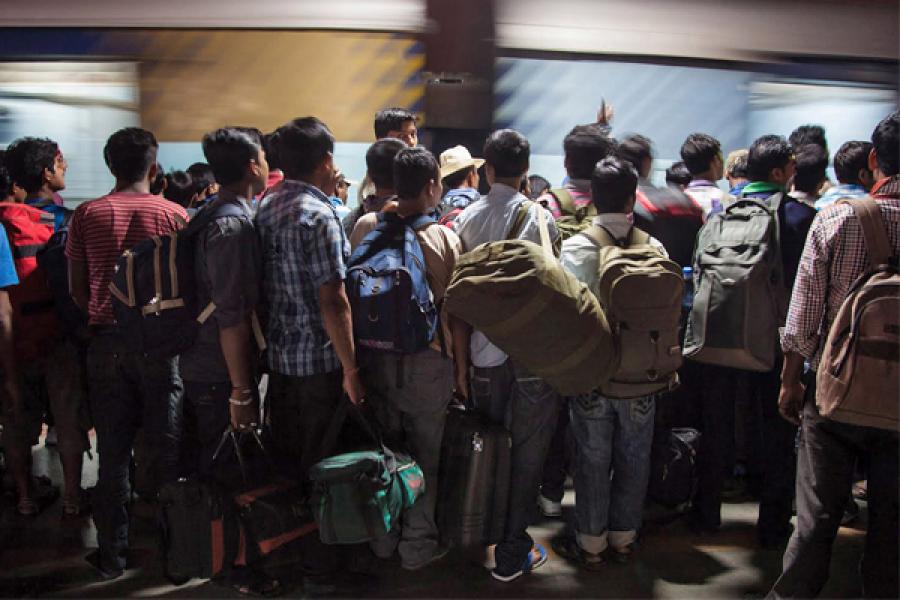 Image: Reuters
People from India's northeastern states stand at the railway station to board a train back to their homes in the southern Indian city of Bangalore on August 16, 2012. Thousands fled as fear grew of a backlash over violence against Muslims in Assam and neighbouring Myanmar.
Even on Friday, Kishore Barua was sure he would never flee from Bangalore. He had gone to Majestic, the main railway station to send off a friend from his town in Assam, and asked him to assure his mother that he was safe. He had sent along a small gift, something that his friend could slip into his pocket, mainly to say he is fine here and things are normal.
But, on Saturday afternoon, he went to Cantonment Railway Station, bought himself a ticket to Chennai, waited in a crowded platform and squeezed himself into an unreserved compartment as soon as Brindavan Express arrived. From Chennai, he would go to Pondicherry, to be with his cousin for may be a couple of weeks. His cousin, who works in a hotel, is making a decent living, and has been calling him for several months now. He called him again that morning, and invited him.
But it was not the invitation that sealed his decision to leave. It was his memory of an incident that happened when he had just moved to Bangalore four years back. That kept playing in his mind ever since his friend left for Guwahati on Friday.
Kishore was then working as a security guard at an apartment.  In that complex, there was a man whom he watched every day. He saw him go to office, dressed in formals, come back, slightly tired; he saw him to go out to shop in a nearby market, and on some days for a walk with his wife. He seemed to be calm all the time, incapable of hurting a fly. Until one day, there was a theft in the apartment, and a few men caught the thief – hardly out of his boyhood - and started thrashing him. And in that crowd Kishore saw this man too. He was hitting the boy the hardest. His face, Kishore said, was dark with anger.
Waiting for his train, Kishore recounted this story matter-of-factly, almost like a philosopher. He still thinks of Bangalore as a good place, with very good people. He will come back in a couple of weeks. But now, he said, he will go: “When people are angry, you don’t know what they will do.”
***
It’s this fear – the fear of not knowing what might happen - that has driven thousands of people from North-East away from Bangalore. Anything can. In Assam, the clashes between Bodos and Muslims have left at least 50 people dead and more than 5 lakh people in displacement camps. It has been spilling over to places as far flung as Pune, Chennai and Bangalore. Now, fearing the worst, many are going back. Starting from Independence Day, for three days, the main railway station in Bangalore saw an endless stream of people – all heading to Guwahati. Indian Railways ran eight special trains, scurrying for coaches. Railways sold over 29,000 tickets in these days. The platforms were full. People scrambled to get into the train. It’s a 54-hour journey to Guwahati, and it couldn’t have been a comfortable journey.
It’s telling on Bangalore in many ways. In places such as Ejipura, Neelasandra, Rajaji Nagar and Majestic – the pockets that had a higher concentration of people from the North-East, there are closed doors, and an eerie silence. In sectors that predominantly employed people from North-East, there is labour shortage. A businesswoman who along with her husband runs four restaurants and two beauty parlours in the city said 50% of her staff has left. A couple of Chinese restaurants have temporarily closed down.
Security services providers, another sector which has been more than welcoming of North-Easterners – are feeling the heat too. Capt A. Maruthai, who started Alert Commandos after spending over 27 years in army, and counts World Trade Centre and Garuda Value Mall among his customers says, of 2,000 people he employs in Bangalore, 900, all from the North-East, have left. He is managing by asking the existing staff to work longer. "I never expected this will happen", Maruthai said.
***
Many can’t believe this happened
Last week, a few days before Independence day, Kadambari Kashyap, a 17-year-old girl, who is studying in a local college, and whose parents are in Guwahati, received an SMS. Its tone was dark, its content morbid. It said people from North-Eastern states were getting killed in Neelasandra. She immediately checked with one of her friends, and dismissed it as a rumor.
Later, she started getting more messages – about violence against the North-Easterners in various parts of the city - in Koramangala, Shivaji Nagar and so on. Kadambari had a few relatives who have been in Bangalore for longer, and she called them up. They weren’t even aware of the SMSs.  She checked the newspapers.  There were no reports on violence.  She was convinced they were just rumors.
But, there were threats, and attacks. One business woman, we spoke to, said her brother-in-law was shaken up by a few people. They warned him to be prepared for worse after Eid (which is today). 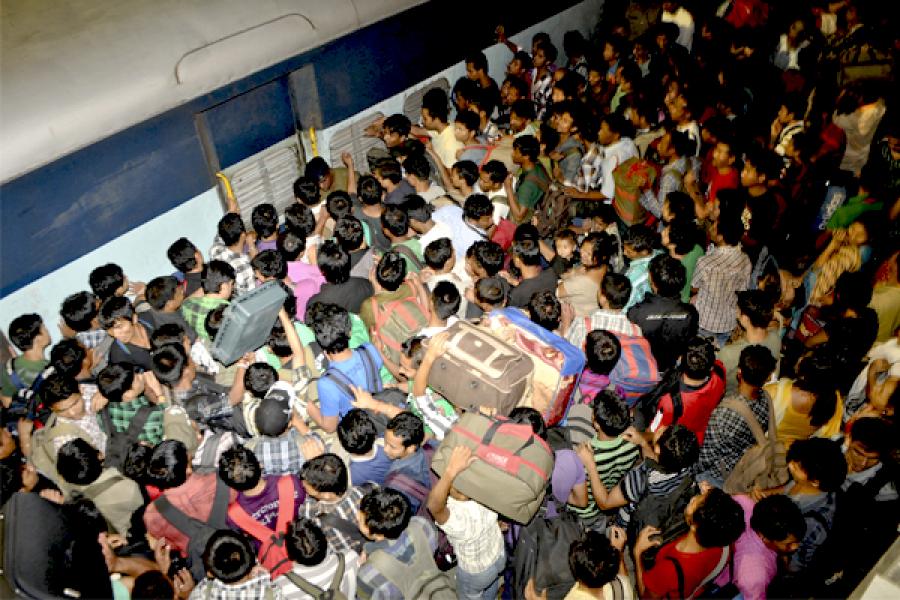 Image: Reuters
The hooligans pick their targets based on the looks, and if someone looks North-Eastern, that’s enough. "Two days ago, a Chinese restaurant in Whitefield closed because they had a gang of 4-5 people walk in and ask for the 'white skin' people. When the staff insisted they were not from Assam, the gang said they did not care and that they would put knives in their stomachs," said the business woman.
Yet another person, who has been working with a few associations for the welfare of North-East, said there were at least 25 cases of people getting beaten up. But, the victims are usually so traumatized that they don’t go to police to register the case. In many cases, police don’t register the case if the case is filed by a North-Easterner and if the attacker is a local. The attacks never surface.
But in the last few days, such instances have surfaced. WSJ quoted a person who was roughed up by a few hooligans because he was from Assam.  CNN-IBN reported that eight people have been arrested for assault.
The result: over 30,000 left Bangalore.
***
“I’m on the verge of leaving,” says Monika Khangembam, 24, who came to Bangalore two years back. “My mum calls me every half an hour and says she will send tickets [to go back]. I said, ‘I’ll send my two siblings, but I’ll stay. I’m not coming at any cost.’ And, my siblings say ‘if you’re not going, we’re not going either’.”
For those who have decided to stay – and most of them admittedly are better off in terms of economic background and social connections – it’s a question of balancing the risk of getting attacked and an optimism that says something that’s wrong cannot go on.
That ‘wrong’ has to do with the discrimination that people from North-East have faced in the rest of the country. In India, where people tend to go granular about a person – and constantly look for verbal hints (the accent, idiom & name-dropping) and visual cues (color of the skin, gestures and so on) that might throw some light on the exact village one’s ancestors belonged to, on the sub-sect within the sub-sect of a caste, a specific dialect - it’s hard for anyone to escape feeling like an outsider anywhere. For those from North-East, with their distinctive features, it’s worse.
Many say they have felt the discrimination again and again. But these issues rarely get discussed in the media. It only comes up whenever a headline-grabbing event happens, and soon fades out. When Richard Loitam, a student from the North-East, was found dead in mysterious circumstances in April, newsrooms in Bangalore were hot with debates on whether to see it as an extreme example of discrimination against North-Easterners, or treat it as a random event. They tended towards the latter. However, for those from the North-East, it was clear. There was discrimination.
The exodus was not merely because of a few text messages and the threat of violence. Those were given credence by a longer history.
Some from North-East see the prevailing discrimination as a good enough reason to stay back at this time. Kashyap, still in her teens, says: “If we go back, it’s like saying ‘we’re different from you people, so we’re going back’. This is not the solution. The bridge will narrow only if we stay strong.”
***
In one of the most dramatic scenes in Ashokamitran’s 18th Parallel, a novel set in the twin cities of Hyderabad and Secunderabad during a tumultuous period which saw the overthrow of Nizam after independence, the protagonist finds himself in the middle of an early morning clash between the Hindus and the Muslims. A group of blood thirsty rioters start chasing him. He runs into a narrow lane, but he is spotted. To escape them, he climbs a wall, and lands into a very poor household. There are three or four men who could have beaten him into pulp during the normal times. But now, there was only panic in their eyes. A girl about sixteen comes forward, and undressing herself, pleads him to spare her family. The hero is horrified. He jumps out to the street and starts running. He is assaulted by the guilt of having made a girl, barely a child, insult herself thus to save her family. As he runs, he wonders if it’s even possible to wash away this sin.
It seems unlikely that Bangalore will see a major clash or a backlash against people from North-East. The government is on an alert mode. It has deployed additional reserve police in sensitive areas. There has been a show of solidarity – from across communities. Newspapers have reported a few uplifting scenes in Railway Station of people representing different communities urging North-Easterners to change their minds and stay back. It’s even possible that many will return soon.  The jobs are here.
Already, there are news reports that exude optimism. “North-East Exodus wanes, at last in Bangalore”. “Fewer people from North-East leaving Bangalore”. “Exodus turns to a trickle”.
In a few weeks, the absence of any major tragedy will be seen as a success.
Yet, the fact that so many people had to face the indignity of running away from their fellow men has already left an uncomfortable mark on Bangalore.  It’s a mark that will be impossible to wash away.

Tweets by @forbesindia
Race to the Top
Should CEOs Worry About 'Too Big to Succeed?'