Boeing will report its latest quarterly financial results on Wednesday, and analysts expect the Max crisis to continue to batter the company's sales and profits. Amid all this, Dennis A. Muilenburg, the company's chief executive, is preparing to testify before Congress next week 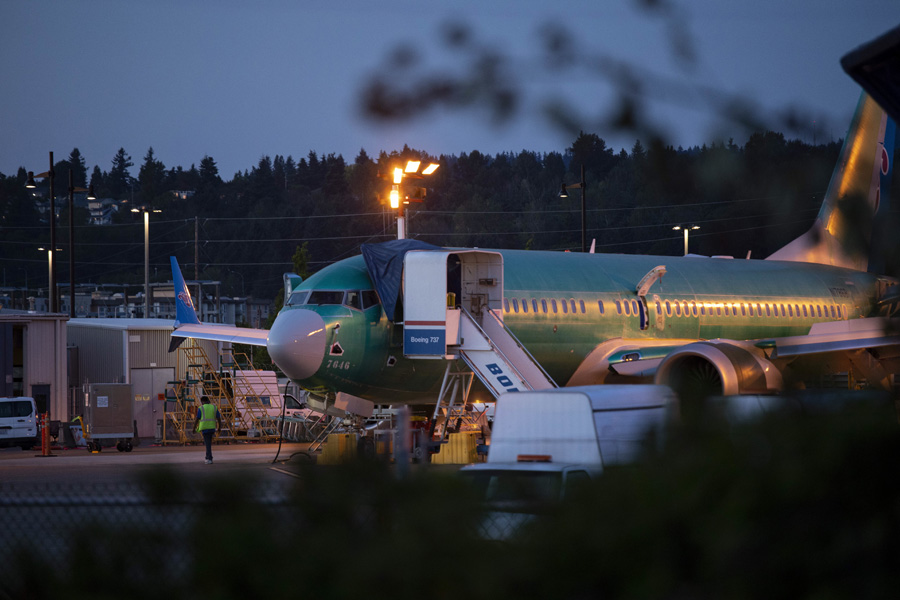 FILE -- A Boeing 737 Max plane at the Boeing plant in Renton, Washington, July 24, 2019. Boeing will report quarterly earnings on Oct. 23, and analysts expect the Max crisis to continue to batter the company’s sales and profits. (Ruth Fremson/The New York Times)

When Boeing’s board gathered on Monday, it confronted a grim reality. The crash of two 737 Max jets had already thrown the company into the biggest crisis in its 103-year history, and things only seemed to be getting worse.

During tense meetings at the Boeing facilities in San Antonio, where the company makes Air Force One, executives and directors spent more than five hours discussing how to manage a worrisome cascade of bad news in recent weeks.

It was revealed on Friday that before the Max was certified, a pilot who played a central role in the plane’s development had voiced concerns about an automated system that played a part in both crashes. The revelation undermined an essential part of Boeing’s defense, opened the company to more legal exposure and sent the stock price plummeting as Wall Street grew more concerned about when the plane would get back in the air.

Some at Boeing have expressed concern that the messages may have further complicated efforts to return the Max to service, according to three people familiar with the matter, who requested anonymity because they were not authorized to speak publicly.

The Max remains grounded seven months after the second of the two crashes, which killed 346 people. Boeing has said that any delays beyond this year could lead it to temporarily halt production of the plane, which would have enormous economic and financial consequences for the company, its employees and its suppliers.

Boeing will report its latest quarterly financial results on Wednesday, and analysts expect the Max crisis to continue to batter the company’s sales and profits. Amid all this, Dennis A. Muilenburg, the company’s chief executive, is preparing to testify before Congress next week.

The messages from the pilot, Mark Forkner, were revealed just a week after Boeing stripped Muilenburg of his additional title of chairman. That move followed a damning report from a multiagency task force that arrived at scathing conclusions about Boeing, the Federal Aviation Administration and the certification of the Max.

Removing Muilenburg as chairman was the first sign that the Boeing board was working with more urgency, and beginning to address the question of who, if anyone, would be held accountable for the crisis consuming the company.

Boeing has tried to minimize the fallout from Forkner’s messages. On Sunday, the company said in a statement that it understood the concern about the messages. “We especially regret the difficulties that the release of this document has presented for the U.S. Federal Aviation Administration and other regulators,” the company said.

Boeing said it had not yet spoken to Forkner, who now works at Southwest Airlines, about the messages. But the company said that a statement from Forkner’s lawyer suggested he was complaining about problems he had encountered with the Max in a flight simulator. Boeing also said in its statement that the simulator Forkner used that day was still undergoing testing at the time.

Wall Street analysts downgraded Boeing stock on Monday, as shares in the company continued to slide. After losing 8% on Friday, the stock fell another 4% on Monday.

Of particular concern was whether the revelations might further delay the Max’s return to service. Boeing and the FAA have been suggesting that the Max could be recertified by the end of the year.

But the FAA administrator, Stephen Dickson, was frustrated that the regulator learned about the messages only last week, months after the Department of Justice reviewed them, and sent Muilenburg a terse letter demanding an explanation. Boeing faces multiple lawsuits and investigations, including one by the Justice Department.

“We see increasing risk that the FAA won’t follow through with a certification flight in November and lift the emergency grounding order in December,” UBS said in a note downgrading the stock. “We think a push out of the return to service could increase the likelihood of a pause on the 737 Max production system.”

Seth M. Seifman, an analyst at JPMorgan Chase, said the revelation of the messages “makes it more challenging for regulators to endorse the 737 Max near term.”

Shares in several major Boeing suppliers also fell on Monday, including Spirit AeroSystems, which makes the plane’s fuselage, and General Electric, which makes the Max engines through a joint venture.

“Shutting down production entirely would have a terrible impact on the supply chain and the industry,” said Scott Hamilton, managing director of the Leeham Co., an aviation consulting firm. “It would be a horrific disaster.”

Boeing has already said that the Max crisis has cost it at least $8 billion, a figure that is expected to rise.

As Boeing tries to contains the financial fallout, it is also preparing to send Muilenburg before members of Congress, who are preparing intensely for the hearings.

On Oct. 8, staff members for the House Transportation and Infrastructure committee gathered for a meeting on Capitol Hill for a briefing by Phil Barnett, who worked in Congress for years before starting a consulting firm, Co-Equal, that helps lawmakers prepare for hearings.

At the briefing, Barnett and his colleagues walked the congressional staff members through effective questioning techniques, and played video clips from past hearings demonstrating moments when lawmakers got the upper hand on executives.

Muilenburg has held several sessions with Boeing staff and outside advisers in Washington and Chicago. At times, Boeing staff have tried to create an atmosphere akin to a congressional hearing, peppering Muilenburg with questions as if they were the lawmakers.

Muilenburg has also been working with outside lawyers to prepare for the scrutiny by lawmakers. Among the challenges facing Muilenburg will be whether he can convince Congress that he has responded to the crisis with urgency and authenticity.