The cash-starved shared office space startup could choose between two competing financial rescue packages as early as Tuesday, at a critical time for the company 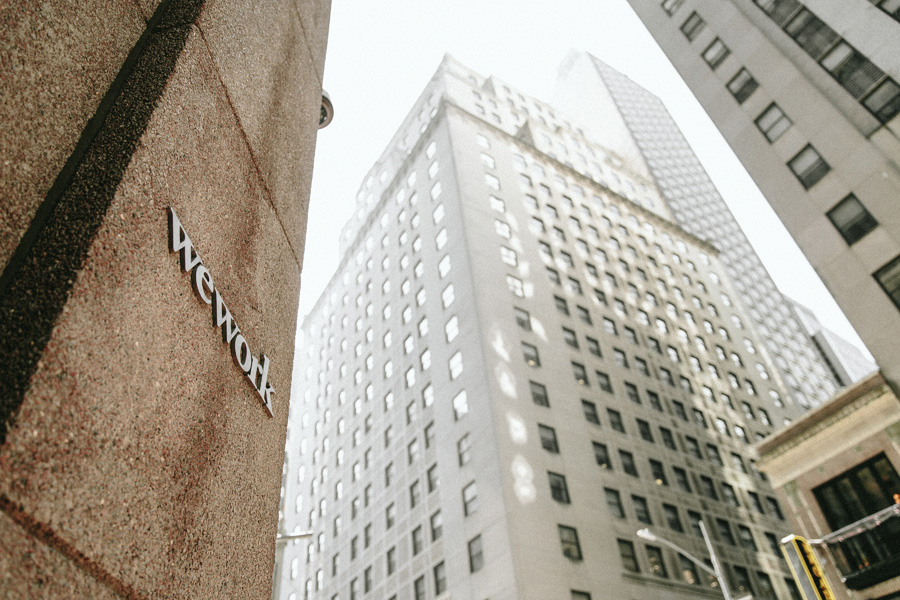 FILE -- A building in Manhattan’s Financial District where WeWork offers shared office space, in New York, Sept. 23, 2019. The board of WeWork, the cash-starved purveyor of shared office space, is weighing competing financial rescue packages from SoftBank and a financial consortium led by JPMorgan Chase, according to two people with knowledge of the matter. (Haruka Sakaguchi/The New York Times)

The board of WeWork, the cash-starved purveyor of shared office space, could choose between two competing financial rescue packages as early as Tuesday, according to people with knowledge of the matter. One is being offered by SoftBank, and another from a financial consortium led by JPMorgan Chase.

SoftBank, a Japanese technology giant that is already the largest outside shareholder in WeWork, is offering to take a controlling stake by accelerating a $1.5 billion investment it had planned to make next year and by buying up to $3 billion in shares held by other investors, two people said. SoftBank is also offering to put together loans totaling $5 billion from a consortium of financial institutions, including itself.

JPMorgan’s proposal consists of several parts, including new bonds, some of which would carry high interest rates, according to a person with knowledge of its plans. That package could add up to roughly $5 billion.

The potential cash infusion comes at a critical time for WeWork, which scrapped an initial public offering last month after Wall Street balked at its huge losses — it had an operating loss of $1.4 billion in the first six months of the year on revenue of $1.5 billion.

Under the SoftBank proposal, Neumann would relinquish the control he still has over WeWork as its largest individual shareholder and step down from the company’s board, giving up his position as nonexecutive chairman, according to two people with knowledge of the transaction. It was not clear how large a stake Neumann would retain in WeWork if SoftBank took control of the company.

Once one of the world’s most celebrated startups, WeWork was valued by SoftBank at $47 billion in January but had considered selling shares in its initial public offering at a valuation as low as $15 billion. SoftBank’s latest offer to the company values it at a little less than $8 billion.

Under Neumann’s leadership, the company expanded so fast that it is the largest private tenant in Manhattan and a major force in London, San Francisco and other big cities.

In recent weeks, it has been seeking to raise billions of dollars to keep going. In its IPO filing, WeWork said it had $2.5 billion in cash at the end of June but also revealed that it was burning through hundreds of millions of dollars every month.

SoftBank, which has invested about $10.5 billion in WeWork, has more than its investment in the company at stake. A collapse of WeWork could hurt SoftBank’s efforts to raise a second Vision Fund, a sequel to its roughly $100 billion technology investment fund.

JPMorgan also has extensive ties to WeWork. It was one of the lead underwriters of the aborted IPO and has made large loans to Neumann. The bank had been leading talks with WeWork to renegotiate a $6 billion financing package that was tied to the public offering.

WeWork’s need for cash is behind the urgent efforts. The company’s rapid expansion requires a steady stream of money to pay rent and refurbish new locations.

In the 18 months through the end of June, WeWork used nearly $4 billion to fund operations and expand into new spaces. It could not have done all of that without a huge flow of cash from SoftBank.

The IPO and loans contingent on the offering were expected to raise as much as $10 billion. WeWork must now try to get by with a much smaller financial infusion.

Some Wall Street analysts had estimated that WeWork would run out of cash by the middle of next year at its recent growth rate. But other experts say the company is already facing a financial squeeze.

Vicki Bryan, chief executive of Bond Angle, a research firm, said WeWork might have been able to tap into only $1.5 billion of the $2.5 billion that it said it had at the end of June. Use of the rest of the money appears to be restricted because it included customer security deposits or because it was held by the company’s subsidiaries, she said.

In the first half of this year, WeWork consumed about $1.5 billion. If the company has continued to spend money at that rate, it may have depleted most of its unrestricted cash.

If it ends up taking control of WeWork, SoftBank would need to make some tough decisions quickly. It could seek to halt WeWork’s expansion to reduce expenses. The co-chief executives who replaced Neumann have started cutting costs and have moved to shut down or sell some divisions and assets, including a private school in Manhattan.

But that may not be enough to stabilize the business. SoftBank may also have to start shutting down WeWork’s least profitable spaces and lay off large numbers of employees. The company employed more than 12,500 people at the end of June.