After refusing the G-7 help, Brazil decided to accept $12 million in aid from Britain to help fight the fires in the Amazon, after a meeting between the country's foreign ministers 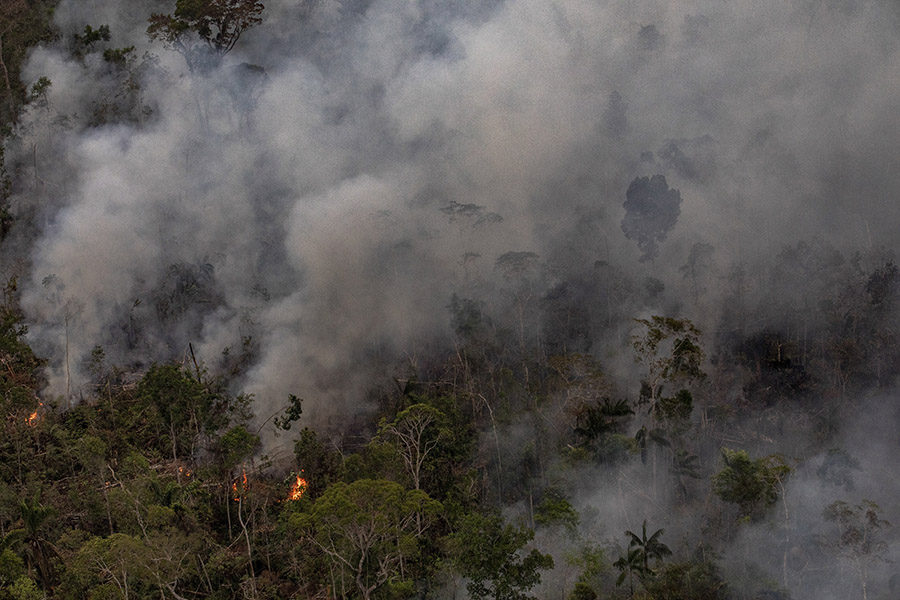 A forest fire in the Amazon near Porto Velho, Rondonia, Brazil, Aug. 26, 2019. President Jair Bolsonaro suggested that he would reconsider accepting aid for the Amazon if President Emmanuel Macron of France withdrew “insults made to my person.” (Victor Moriyama/The New York Times)


RIO DE JANEIRO — Hours after leaders of some of the world’s wealthiest countries pledged more than $22 million to help combat fires in the Amazon rainforest, Brazil’s government angrily rejected the offer — only to later lay out potential terms for the aid’s acceptance and then, Tuesday evening, accepting some aid from Britain.

President Jair Bolsonaro of Brazil expressed his ire in a series of Twitter posts Monday, extending his verbal feud with President Emmanuel Macron of France, who had announced the aid package at the Group of Seven summit.

But early the next day, Bolsonaro offered possible terms for its acceptance. If Macron withdrew what he called personal insults and insinuations that Brazil does not have sovereignty over the Amazon, he said, he would reconsider.

After refusing the G-7 help, Brazil decided to accept $12 million in aid from Britain to help fight the fires in the Amazon. The decision was made after Brazil’s foreign minister, Ernesto Araújo, was offered the help by Dominic Raab, the British foreign secretary, in a meeting Tuesday.

“The government stresses that all external support is welcome, provided the decision over how those resources are employed is ours,” said Otávio Rêgo Barros, the government spokesman, describing the Bolsonaro administration’s approach to accepting or rejecting foreign help. “Our sovereignty is nonnegotiable.”

More than 26,000 forest fires have been recorded in the Amazon rainforest this month, the highest number in a decade, setting off outrage and calls for more protections. The forests absorb a significant share of the planet’s climate-warming carbon dioxide, are home to indigenous peoples and are a vital habitat for endangered species.

President Donald Trump praised Bolsonaro on Tuesday, posting on Twitter, “He is working very hard on the Amazon fires and in all respects doing a great job for the people of Brazil — Not easy. He and his country have the full and complete support of the USA!”

On Tuesday, Bolsonaro and members of his Cabinet met with governors from all nine states that make up Brazil’s Amazon region to discuss the fire and offers of aid.

Some governors made clear they supported Bolsonaro’s drive to develop the Amazon and complained that too much of their states’ territories were blocked off as indigenous and environmental reserves, hampering their growth.

Others were more concerned with securing the help offered by the G-7 countries and with bolstering diplomacy.