After researchers noticed fewer nearsighted patients in a hospital ward in China, they speculated that wearing glasses might offer some protection against Covid-19. 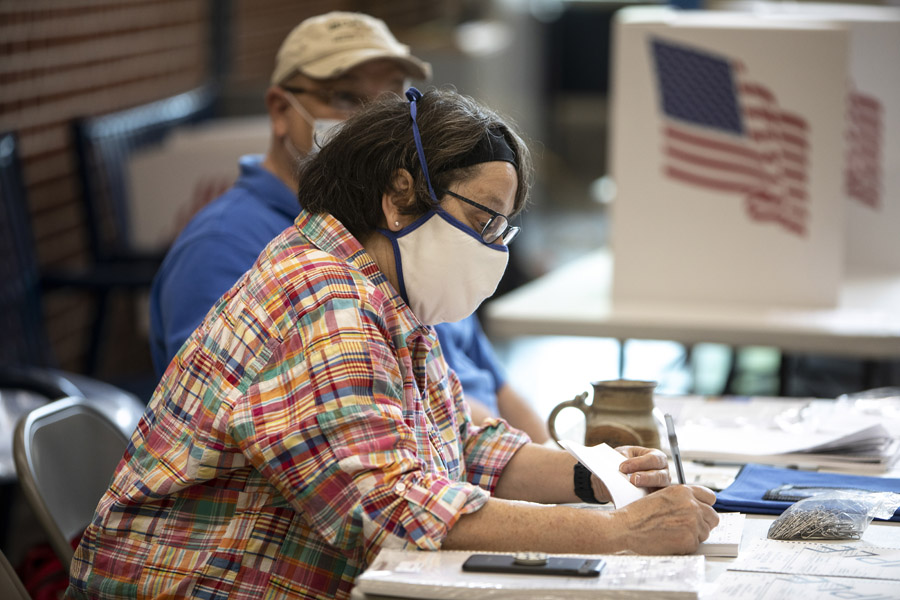 A volunteer wearing glasses and a mask at a polling location in Des Moines, Iowa, June 2, 2020. After researchers noticed fewer nearsighted patients in a hospital ward in China, they speculated that wearing glasses might offer some protection against Covid-19. (Kathryn Gamble/The New York Times)

When researchers in China were analyzing hospital data of patients with COVID-19, they noticed an odd trend: Very few of the sick patients regularly wore glasses.

In one hospital in Suizhou, China, 276 patients were admitted over a 47-day period, but only 16 patients — less than 6% — had myopia or nearsightedness that required them to wear glasses for more than eight hours a day. By comparison, more than 30% of similarly aged people in the region needed glasses for nearsightedness, earlier research had shown.

Given that the rate of nearsightedness appeared to be so much higher in the general population than in the COVID ward, the scientists wondered: Could wearing glasses protect a person from becoming infected with coronavirus?

“Wearing of eyeglasses is common among Chinese individuals of all ages,” the study authors wrote. “However, since the outbreak of COVID-19 in Wuhan in December 2019, we observed that few patients with eyeglasses were admitted in the hospital ward.”

The observation “could be preliminary evidence that daily wearers of eyeglasses are less susceptible to COVID-19,” the authors speculated.

Experts say it’s too soon to draw conclusions from the research — or recommend that people start wearing eye protection in addition to masks in hopes of lowering their risk for infection.

It may be that eyeglasses act as a partial barrier, protecting eyes from the splatter of a cough or sneeze. Another explanation for the finding could be that people who wear glasses are less likely to rub their eyes with contaminated hands. A 2015 report on face touching found that over the course of an hour, students watching a lecture touched their eyes, nose or mouth, on average, about 10 times, though the researchers did not look into whether wearing glasses made a difference.

The current study, published in JAMA Ophthalmology, was accompanied by a commentary from Dr. Lisa Maragakis, an infectious disease specialist and associate professor of medicine at Johns Hopkins School of Medicine, who urged caution in interpreting the results.

The study was small, involving fewer than 300 cases of COVID-19, a tiny fraction of the nearly 30 million reported cases of coronavirus infection around the world. Another concern is that the data on nearsightedness in the comparison group were gleaned from a study that took place decades earlier.

And Maragakis noted that any number of factors could confound the data, and it may be that wearing glasses is simply associated with another variable that affects risk for COVID-19. For example, it could be that people who wear glasses tend to be older, and more careful and more likely to stay home during a viral outbreak, than those who do not wear glasses. Or perhaps people who can afford glasses are less likely to contract the virus for other reasons, like having the means to live in less crowded spaces.

“It’s one study,” Maragakis said. “It does have some biological plausibility, given that in health care facilities, we use eye protection,” such as face shields or goggles. “But what remains to be investigated is whether eye protection in a public setting would add any protection over and above masks and physical distancing. I think it’s still unclear.”

Health care workers wear protective equipment over their eyes to protect them from droplets that can fly from coughs and sneezes, as well as aerosolized particles that form when patients undergo medical procedures, such as intubation. But for a vast majority of people, that extra level of protection probably isn’t needed if a person is wearing a mask and keeping physical distance in public spaces. There’s also the possibility of introducing risk by wearing glasses — some people might touch their faces more when they put on glasses, rather than less, Maragakis noted.

That said, more study is needed to see if the trend holds up in other study populations, said Dr. Thomas Steinemann, a spokesman for the American Academy of Ophthalmology and professor of ophthalmology at MetroHealth Medical Center in Cleveland.

But Steinemann noted that the study shouldn’t cause worry among people who don’t wear glasses. “It probably can’t hurt to wear glasses, but does everybody need to do that? Probably not,” he said. “I think you have to consider the practicality of wearing eye protection or a face shield. People in certain occupations, first responders, caregivers for someone who is ill, those are people who should maybe take special notice.”

Tweets by @forbes_india
Photo of the day: Congress workers detained amidst a protest against agricultural reforms bills in Delhi
Top 10 financial institutions: 2010 vs 2020