Electric cars are getting louder. Here's why

As electric vehicles continue to gain popularity, a conceivable problem is the lack of sound that their quiet engines make. Now, carmakers are trying to change that, to avoid mishaps, as governments around the world ask them to turn up the volume 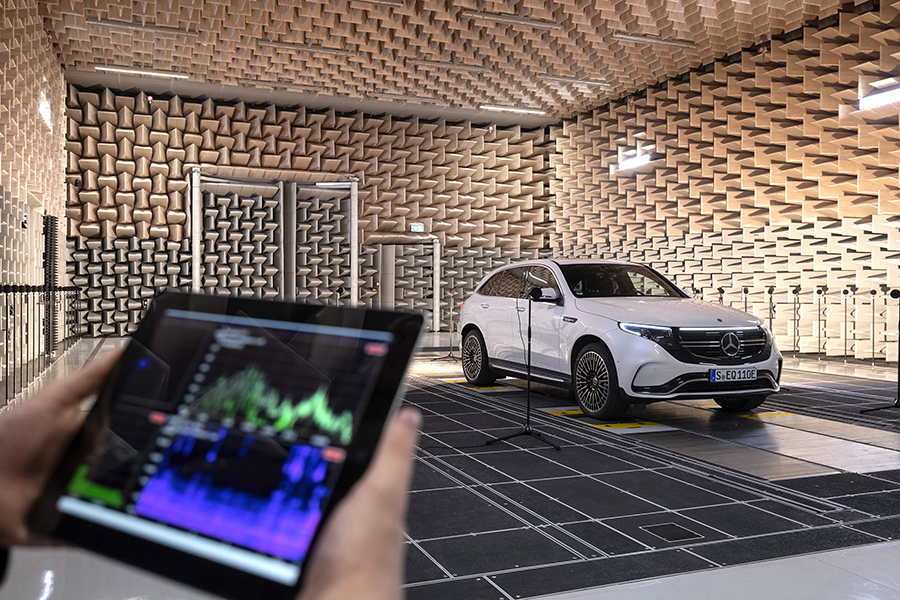 In a photo provided by Jaguar, Iain Suffield, a Jaguar technical specialist, tests the acoustic vehicle alert system in an I-PACE, the company's all-electric luxury crossover that complies with both the European and American regulations. All electric vehicles in the U.S. will soon be required to make warning sounds so pedestrians can hear them coming. (Jaguar via The New York Times)

Driving an electric vehicle in near silence can be a joy for those who don’t relish the rumble and whine of an internal combustion engine. But this hushed operation can be difficult to hear from more than a few feet away, making it a deadly problem for the vision-impaired who can’t see a vehicle approaching.

Equipping such vehicles with audible alerts is vital, says Claire Stanley, an advocacy and outreach specialist for the American Council of the Blind.

“As blind individuals, we learn to travel across streets and maneuver through cities by reading the sound of traffic around us,” she said. “But the silent nature of electric cars suddenly robs us of such clues.”

Governments around the world have told automakers to turn up the volume for the safety of pedestrians and cyclists. Japan issued guidelines for acoustic vehicle alerting systems in January 2010, with the United States and the European Union announcing regulations soon after. But the requirements differ among countries, both in terms of what the warning sound can be and when it should activate.

In the European Union, an alerting system that sounds like an internal combustion engine and generates noise at speeds below 20 kph (about 12 mph) must now be installed in every new electric vehicle. Existing electric vehicles are required to incorporate the device by July 2021.

From September 2020, the United States will require all fully electric vehicles and hybrids operating in electric-only mode to make a sound at speeds below 18.6 mph. While that window might seem overly precise — why not 19? — the number is based on research showing that the electric motor and tires make enough noise at speeds above that value to alert pedestrians in time to avoid a mishap.

Mercedes-Benz developed audio alert systems for its vehicles sold in Japan, China, the United States and Europe at its acoustic test facility in Sindelfingen, Germany. Sounds for Asian markets and the European Union are similar, while the tone for American cars is different.

Tobias Beitz, head of sound quality and design at Daimler, the company that owns Mercedes-Benz, said the automaker had created a “pleasant and natural” sound.

“The system does not generate any science-fiction sounds that are strangely imposed on the car, but emphasizes the already existing noise of the vehicle and blends in seamlessly with the overall sound,” he said.

A video comparing sound generator-equipped Mercedes EQC electric vehicles with regular cars is revealing. The European electric vehicle sounds a bit like an engine, while the American version produces a noise with a mechanical timbre. Both produce a beeping sound, similar to that of a delivery truck, when backing up.

Jaguar has developed an audio alert system for its all-electric I-PACE luxury crossover that complies with both the European and American regulations. According to a news release, the alert was originally designed to sound like a spacecraft, but that version was shelved because it caused many pedestrians to look at the sky rather than the road. The sound the engineers settled on is mechanical in nature and sounds vaguely like the marriage of an electric motor and an internal combustion engine.

When Chevrolet engineers created a sound for the Bolt electric vehicle, they worked within the 2018 requirements from the National Highway Traffic Safety Administration but tried to create a pleasant tone that wouldn’t blast through the vehicle’s acoustics and annoy the driver and passengers, said Katie Minter, a Chevrolet spokeswoman.

The placement of speakers on the car is part of the equation. On the Bolt, one is along the centerline of the vehicle’s nose and another is in the rear to meet the requirements that apply when the car is backing up. Adding that second speaker avoided having to make the front speaker loud enough to be heard from well behind the car.

Last month, the U.S. safety agency proposed an amendment that would allow automakers to install a number of sounds in electric vehicles that drivers could select from, rather than one tone.

While automakers have not yet announced a buffet of melodies for motorists, there are hints at what the future could look (and sound) like. The Mercedes-AMG brand once tapped the rock band Linkin Park to create a fake car noise. Nissan is expected to include in its electric Leaf a sound it developed named Canto, a sort of electronic hum. And Tesla’s chief executive, Elon Musk, has indicated that the suite of sounds in his vehicles could even include the bleat of a goat, among other noises.

Tweets by @forbesindia
'I don't look back with regrets': Kevin Pietersen
A forecast for a warming world: Learn to live with wildfires