A forecast for a warming world: Learn to live with wildfires

The US has seen three straight years of record-breaking fires that researchers say are likely to continue in a warming world and which raise an important question: How to live in an ecosystem that is primed to burn?

By Thomas Fuller and Kendra Pierre-Louis 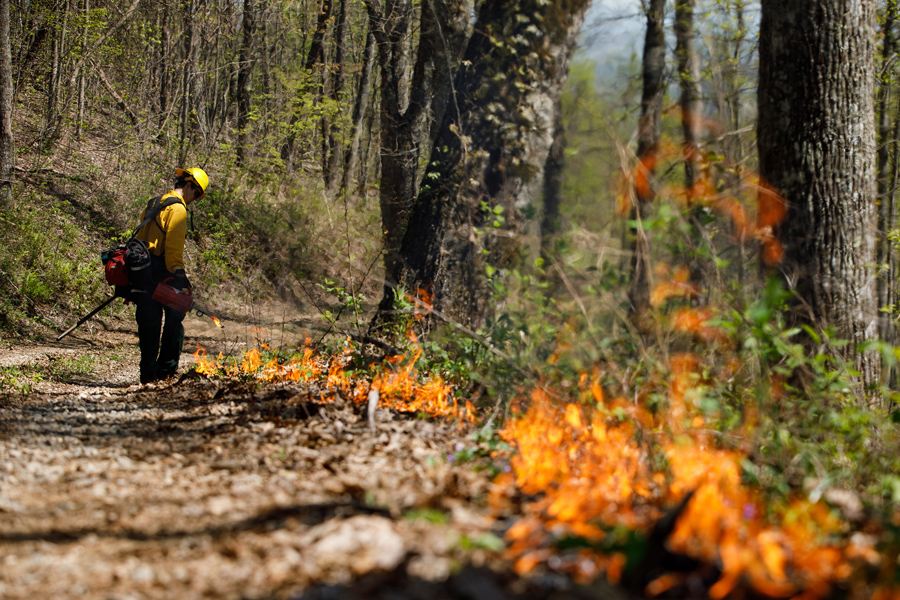 The perimeter of a prescribed burn area is set on Brawley Mountain near Blue Ridge in northern Georgia, on April 23, 2019. The Kincade fire is burning more than 10,000 acres in California. Other areas of the country are experiencing drought so understanding fire is becoming ever more important. (Dustin Chambers/The New York Times)

SAN FRANCISCO — Facing down 600 wildfires in the past three days alone, emergency workers rushed to evacuate tens of thousands of people in Southern California on Thursday as a state utility said one of its major transmission lines broke near the source of the out-of-control Kincade blaze in Northern California.

The Kincade fire, the largest this week, tore through steep canyons in the wine country of northern Sonoma County, racing across 16,000 acres within hours of igniting. Wind gusts pushed the fire through forests like blowtorches, leaving firefighters with little opportunity to stop or slow down the walls of flames tromping across wild lands and across highways overnight.

And north of Los Angeles, 50,000 people were evacuated as strong winds propelled fires into the canyons of Santa Clarita, threatening many homes.

Aerial footage of the Kincade fire showed homes engulfed in flames propelled by high winds that could become even stronger in the coming days.

But beyond the destruction, which appeared limited Thursday to several dozen buildings, hundreds of thousands of people were affected, both by the fires and a deliberate blackout meant to prevent them. Schools and businesses closed, and thousands of people evacuated their homes.

All this is happening after three straight years of record-breaking fires that researchers say are likely to continue in a warming world and which raise an important question: How to live in an ecosystem that is primed to burn?

“I think the perception is that we’re supposed to control them. But in a lot of cases we cannot,” said John Abatzoglou, an associate professor at the University of Idaho. “And that may allow us to think a little bit differently about how we live with fire. We call it wildfire for reason — it’s not domesticated fire.”

According to the National Climate Assessment, the government report that summarizes present and future effects of a warming climate on the United States, fire is a growing problem. Climate change will lead to more wildfires nationwide as hotter temperatures dry out plants, making them easier to ignite.

The total area burned in a single year by wildfires in the United States has only exceeded 13,900 square miles — an area larger than the country of Belgium — four times since the middle of last century. All four times have happened this decade, according to the National Oceanic and Atmospheric Administration and NASA.

Although winds in California were forecast to subside later on Thursday, officials warned that the extreme winds and dry conditions that create high risk for fires could return on Sunday. This is why government agencies are preparing themselves to deal with fires that are increasingly seen as inevitable.

Prescribed burns, or planned fires, like one set last spring on Brawley Mountain in Georgia in southern Appalachia roughly 100 miles north of Atlanta, are often seen as part of the solution.

The idea that fire could itself be used to help fight fire and restore ecosystems first gained institutional acceptance in the South. In 1958 a policy change was made to allow for the first prescribed burn in a national park, at Everglades National Park in Florida.

For some time, the practice remained anomalous outside of the South. But within the south, according to Nathan Klaus, a senior wildlife biologist with the Georgia Department of Natural Resources, even private landowners would occasionally set smaller, controlled fires on their property.

Before the era of fire suppression, north Georgia around Brawley Mountain used to burn roughly every three to five years, according to Klaus. Those blazes allowed species that could withstand some fire, like the longleaf pine, to proliferate and flourish, shaping local ecosystems.

Some of those fires were caused by natural events like lightning; others were caused by human activity. The Forest Service notes that Native Americans used prescribed burns to help with food production. These smaller fires act as a kind of incendiary rake, clearing out grasses, shrubs and other plant matter before they can overgrow to become fuel for bigger, more extreme fires.

Dave Martin, who oversees fire and aviation management in the Forest Service’s Southern Region, said that a prescribed burn costs about $30 to $35 an acre — versus spending about $1,000 an acre for putting out a fire. “The cost of suppressing a fire is more than a prescribed burn,” he said.

Reintroducing fire to the land is more complex than lighting a match. You can’t burn where people live, for example. But nationwide, housing near wild lands is the fastest growing land-use type in the United States. More people are moving into areas that are more likely to burn, and in some cases they may oppose prescribed burning.

And there are limits to prescribed burning. If conditions are too wet, a fire will not ignite, but if it is too dry, the fire is hard to contain. Like Goldilocks, for wild land managers the conditions have to be just right. This includes not just the wind’s speed, which can affect the spread of a fire, but also its direction.

And once the burn starts, its smoke can travel great distances. Smoke from last year’s California’s wildfires not only threw a haze over much of the state, but transformed sunsets as far away as Washington, D.C. On Thursday, NOAA warned residents of the Bay Area that “shifting winds tomorrow will likely cause the smoke to be directly over much of the region,” as a result of the Kincade fire.

So during planned burns great pains have to be taken to make sure that the smoke is directed away from population centers. “If the smoke isn’t doing what we want it to do, we’ll shut it down,” said Nick Peters, the acting district fire management officer for the Chattooga River ranger district in the Chattahoochee-Oconee National Forests.

Tweets by @forbes_india
Electric cars are getting louder. Here's why
Can one LED light give you perfect skin?