Or should you explore other options for a higher guaranteed fixed income? 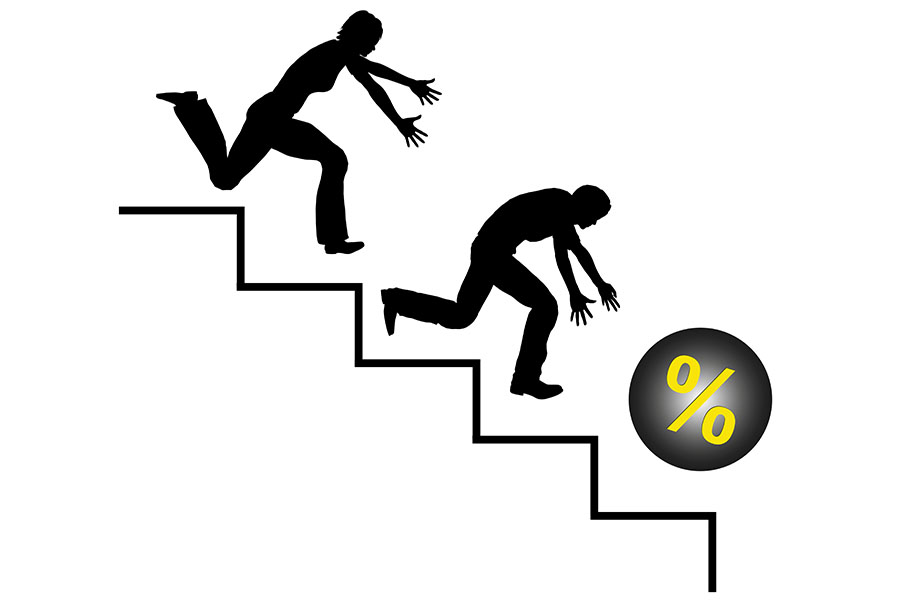 When Ashwin Gupta (name changed) retired from his job at a public sector company in 2007, he put his money, as most retirees do, in fixed deposits (FD) and other small savings schemes. It was a time when the concept of Systematic Investment Plans (SIP) was still nascent and stocks were bought mainly by people who were well-versed with the markets.

At the same time, he points out, prices have gone up. Apart from essentials, a specialist medical consultation that cost ₹400 a decade ago is nothing less than ₹2,000 now. With advancing age, there is also an increased dependence on air travel rather than trains, as well as domestic help. So decreasing FD rates mean that Gupta has had to start dipping into his savings to maintain the same standard of living.

FD rates have been falling for a few years now, part of a global trend where interest rates have been kept low, benefiting asset prices but disincentivising savings. With the Covid-19 crisis, rates are at their lowest in the past decade or so, prompting the need to look at other investment options as banks and the Reserve Bank of India (RBI) incentivise consumption and demand for money.

“The interest rate decline is a massive blow,” says Dhirendra Kumar, CEO of Value Research, an independent financial advisory firm. “To understand the magnitude of this, think of an old person with ₹1 crore who was earning 9 percent, which means `9 lakh a year. If the interest rate comes down to 8 percent, it looks like just a one percent decline, but the income would have come down by about 11 percent.” At any point, he adds, if someone’s income comes down by 11 percent, it is going to be a problem. “Inflation is going up and on the other hand your income is coming down.” 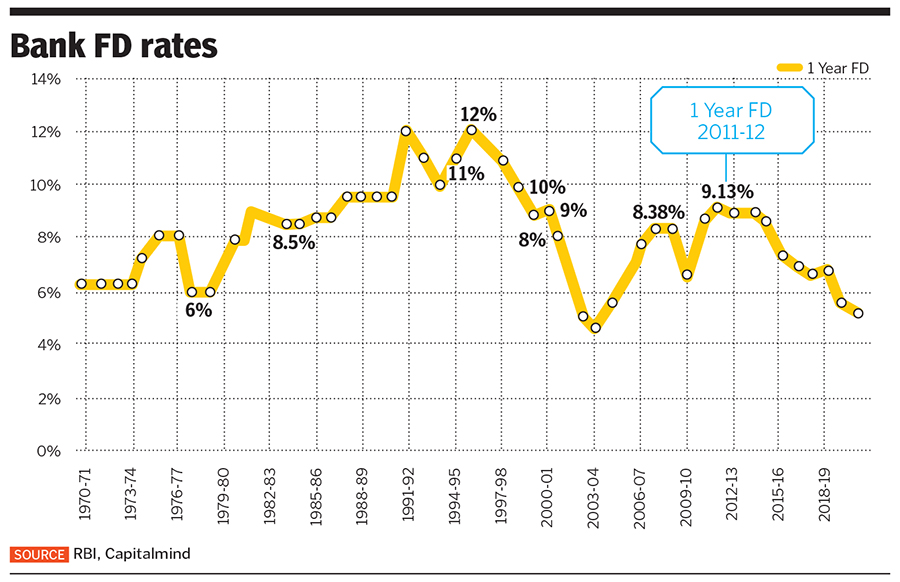 In such a scenario, there are other guaranteed income schemes for senior citizens that offer marginally higher rates than an FD. “For people who are retired or nearing retirement, there are options like the Senior Citizens Savings Scheme (SCSS) and the Pradhan Mantri Vyay Vandana Yojana (PMVVY), which has been extended till 2023,” says Suresh Sadagopan, founder, Ladder7 Financial Advisories. While the SCSS has quarterly disbursal of interest at a specified rate that is revised on a quarterly basis, the PMVVY is an immediate annuity scheme with monthly/quarterly/six-monthly/annual withdrawal options, and an annual reset of the assured rate of interest.

“The investment available per person is ₹15 lakh. If a couple puts that much each in the two schemes, they can invest ₹60 lakh in reasonably safe and reasonably high yielding instruments,” adds Sadagopan. There are also bonds, including RBI bonds, and the Public Provident Fund if they don’t need to withdraw the money immediately. “Then you have the Post Office Monthly Income Scheme that can give you a consistent monthly income.”

For younger people who are still in the accumulation phase, there are options like the Sukanya Samriddhi Yojana for those with daughters, which will build a corpus over 21 years for a girl child. Another option worth considering is the National Pension System, which provides income in retirement with market-based returns during the accumulation phase.

While these options work for people who are completely risk-averse and looking for guaranteed income schemes, the second alternative is that of optimising one’s returns, says Kumar. “There are fixed income funds, corporate debt funds or a combination of some short-term debt funds that can improve your returns by 5 percent or 10 percent, which could be quite meaningful,” he says. If you get six or seven percent, or six and a half percent, or seven and a quarter percent, it looks like 75 basis points, but it is actually 10 percent more income. Though he cautions that one has to be careful. “Many people are not used to it, and what happened recently with the Franklin Templeton schemes [where Franklin Templeton Mutual Fund decided to shut down six of its debt schemes in April citing difficult conditions in the bond market due to the pandemic] has scared people more.” 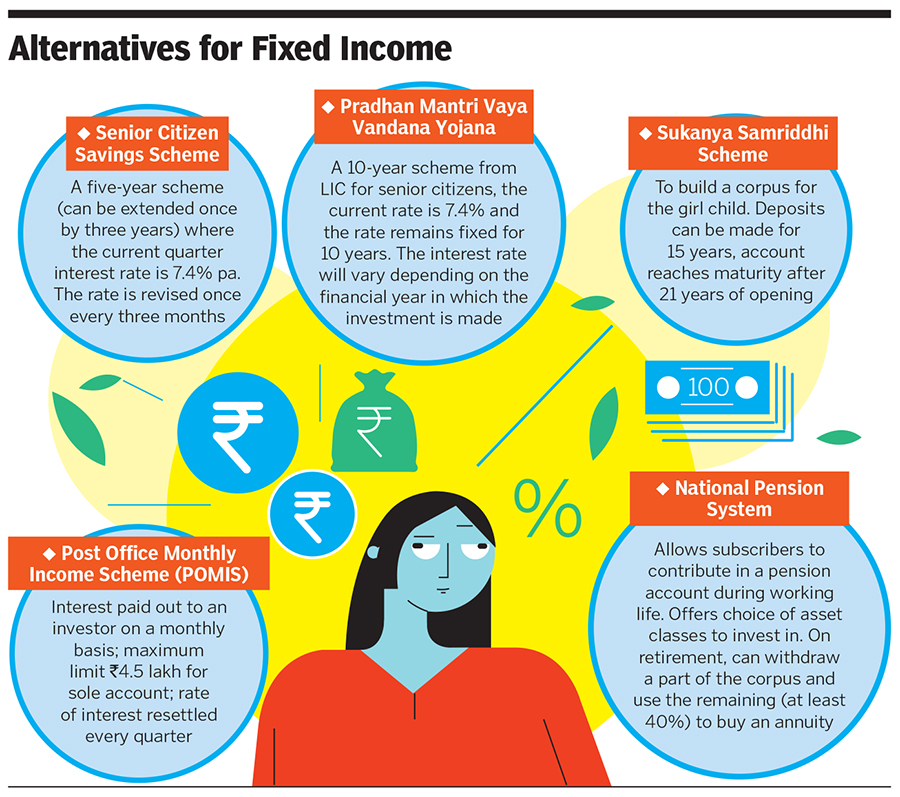 While retirement plans and pension schemes remain alternatives, the important thing to remember with the deferred and immediate retirement annuity plans is that there is no access to the corpus during one’s lifetime. “So that’s a very serious limitation. The second limitation is the kind of return you are getting from that product. Normally, pension plan rates are in the ballpark of six to seven percent, depending on your age. So if you are okay with that, a certain sum of money can be locked into that,” says Sadagopan.

For now it is best to adopt a wait-and-watch policy as interest rates may further go down marginally, but then could go up again. “My sense is they can go up after some time, but not substantially. Before they go up, they can go down a little bit further,” says Kumar.

Right now, the government is looking to kick-start the economy and help businesses raise money at a lower price. So they may keep these rates for a certain duration of time and then they may go up, adds Sadagopan. “There are two sides to the coin. When you keep the interest rates low, the ability of people to get income and spend it is also hampered. So if people are getting less money, then that much less is going to circle into the economy. So it can happen both ways... it will have a two-sided impact. For the next couple of years, the rates may be low for multiple reasons and then they may go up after that,” he adds.

But the fact remains that fixed income returns might not be a suitable source of long-term income to fight inflation, and people might have to learn to do some amount of sophisticated investing.

For instance, even assuming a high rate of interest of, say 10 percent, on ₹1 crore, an investor would get ₹10 lakh. And if the entire ₹10 lakh is consistently consumed, after five years—assuming interest rates remain high—the investor will still get only ₹10 lakh. “Which means there is need for your capital to grow to support higher income. Otherwise on any fixed income, if a person is consuming all the returns generated by the investment, then he/she runs the risk of outliving their savings and dipping into their capital,” points out Kumar.

Investing partly in equity then comes into play. However, Viral Kothari, independent financial intermediary, warns that people who have never invested in equity should not get into it right now just because of the low interest rates. “Ideally, they should be sticking to their asset allocations. The risk-averse shouldn’t be investing into equity directly,” he says, adding that equity is recommended as a long-term investment. “Anyone with a horizon of less than 10 years shouldn’t invest in equity. And if they have a horizon of over 10 years, then equity can be recommended seeing the risk appetite of the investor.”

When it comes to equity, riders abound, including knowing the kind of equity one should invest in as well as the ways in which to invest. For investors looking at the long-term, if they have a reasonable surplus, then a third (or 33 percent) of the money can be in equity, as long as one follows some rules, says Kumar. These include spreading out the investments, not looking at returns on a day-to-day basis but periodically, and taking part of that money and putting it into fixed income, thereby rebalancing the investment.

“If you have decided to invest one-third of your money in equity, and if the equity has done well and becomes 50 percent, take the money out. At some point, equity will go down in value and that 33 percent may become 28 percent. Then put money into it. So you will be able to buy low and sell high. Assuming you have ₹1 crore and you are investing ₹33 lakh in equity, spread that investment over three years, because that is the only way of eliminating the risk of catching a market high,” says Kumar. This will ensure that 33 percent of the money grows in a manner that can support larger capital for a higher income in the future.

“Because,” Kumar adds, “anybody consuming all the income from his investment will end up being poor.”​

Tweets by @forbes_india
Photo of the Day: An alarming level of smog envelopes New Delhi
How powerful is the G-20?