Though they often work side by side with full-timers, Google temps are usually employed by outside agencies and make less money, have different benefits plans and have no paid vacation time in the United States 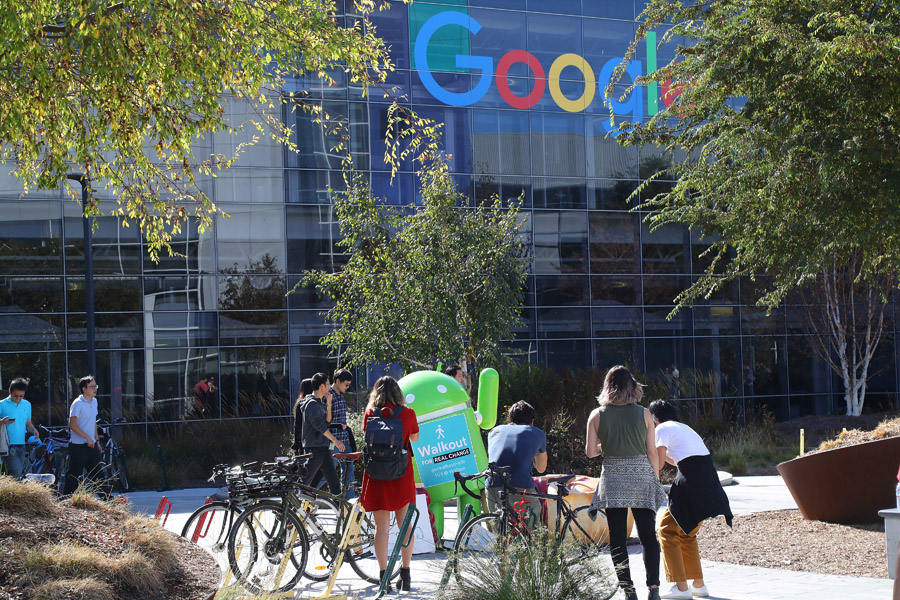 SAN FRANCISCO — Mindy Cruz had an offer for a full-time position at another big tech company when she accepted a temporary job as a recruiter at Google in 2017. The pay was less and the benefits were not as good, but it was one step closer to her dream of becoming a Google employee.

Cruz became one of Google’s many temps and contractors — a shadow workforce that now outnumbers the company’s full-time employees. But she never made the jump to full time. She was swiftly fired after a Google manager, whom she said had harassed her for months, told the temp agency that had hired her that he wanted her gone.

High-tech companies have long promoted the idea that they are egalitarian, idyllic workplaces. And Google, perhaps more than any other, has represented that image, with a reputation for enviable salaries and benefits and lavish perks.

But the company’s increasing reliance on temps and contractors has some Google employees wondering if management is undermining its carefully crafted culture. As of March, Google worked with roughly 121,000 temps and contractors around the world, compared with 102,000 full-time employees, according to an internal document obtained by The New York Times.

Though they often work side by side with full-timers, Google temps are usually employed by outside agencies. They make less money, have different benefits plans and have no paid vacation time in the United States, according to more than a dozen current and former Google temp and contract workers, most of whom spoke on the condition of anonymity because they had signed nondisclosure agreements.

Better treatment for those workers was one of the demands made by organizers of a Google employee walkout last year to protest the company’s handling of sexual harassment complaints.

“It’s time to end the two-tier system that treats some workers as expendable,” the walkout organizers wrote on Twitter in March.

When Sundar Pichai, Google’s chief executive, did not respond to those demands, a group of anonymous contractors sent an open letter demanding equal pay and better opportunities for advancement. In April, hundreds of Google employees signed another letter protesting the dismissal of about 80% of a 43-person team of contingent workers working on the company’s artificial intelligence assistant.

In response, Google said it was changing a number of its policies to improve conditions for its temps and contractors.

The reliance on temporary help has generated more controversy inside Google than it has at other big tech outfits, but the practice is common in Silicon Valley. Contingent labor accounts for 40% to 50% of the workers at most technology firms, according to estimates by OnContracting, a site that helps people find tech contracting positions.

OnContracting estimates that a technology company can save $100,000 a year on average per American job by using a contractor instead of a full-time employee.

In statements to The Times, Google did not directly address concerns that it had created a two-tiered workforce, but said it did not hire contractors simply to save money.

Eileen Naughton, Google’s vice president of people operations, said that if a contingent worker “is not having a good experience, we provide lots of ways to report complaints or express concerns.”

She added, “We investigate, we hold individuals to account and we work to make things right for any person impacted.”

Out of the Loop
When Google became a public company in 2004, its founders, Larry Page and Sergey Brin, wrote that they believed in rewarding employees with unusual benefits because “our employees, who have named themselves Googlers, are everything.”

But not everyone doing work for Google over the years has been a Googler. The company has been using temps and contractors since its early years in projects like scanning books for online search. According to one former Google employee, temps and contractors accounted for about a third of the workforce about a decade ago, and that share has steadily climbed.

Google’s contractors handle a range of jobs, from content moderation to software testing. Their hourly pay varies, from $16 per hour for an entry-level content reviewer to $125 per hour for a top-shelf software developer.

Google usually pays staffing companies, which find the workers and provide them with salaries and benefits as their employer.

But the current and former contract and temp workers, as well as four Google employees, said Google was the employer in all but name. It decides what jobs they do, dictates where and what hours they work, and often decides if and when to fire them.

Google’s contractors are barred from company events like holiday parties and all-hands meetings. They are not permitted to look at internal job postings or attend company job fairs.

In some instances, email messages about workplace security concerns that went out to full-time staff members were not shared with contract workers even though they worked in the same offices, the contractors and temps told The Times.

In their letter to Pichai, the temp workers said the company sent security updates only to full-time employees during a shooting at YouTube’s offices last year, leaving contractors “defenseless in the line of fire.” They were also barred from a meeting the next day to discuss the attack.

Andrea Faville, a YouTube spokeswoman, said that the exclusion had been an oversight and that contractors had been invited to another companywide meeting later that week. She said all security updates went out to all staff members, including contractors and temps, although two contractors working at YouTube said they had not received notices.

Temps With Doctorates
Google has relied on temporary workers even when the work has become more permanent.

When the company started a research project code-named Pygmalion in 2014 to improve its speech-recognition technology, it hired temporary employees — many of whom had doctorates in linguistics — to help annotate and structure data so Google’s computers could better understand what people were saying, according to five people familiar with the project.

The team grew to about 250, and the majority were contractors. Some contractors worked two years on the project, which is Google’s limit, and took a six-month break before returning in a similar role.

Google said it had learned of a possible violation in February and immediately opened an investigation, which is still continuing, into unpaid overtime. The company said it instructed employees not to promise temps future employment.

“Our policy is clear that all temporary workers must be paid for any overtime worked,” Naughton said. “If we find that anyone isn’t properly paid, we make sure they are compensated appropriately and take action against any Google employee who violates this policy.”

States and the federal government are trying to define the distinction between contractors and employees more clearly. The difference usually depends on how much control the company exercises over the worker. That is based on certain criteria, like whether the company has the power to hire or fire the employee, or supervise and control work schedules or conditions of employment. As a result, companies keep contingent workers at arm’s length.

In response to the issues with its temp workforce, Google is both trying to improve their treatment and distancing itself from their management.

Many contractors who reported to a Google employee are now being managed by another contractor, who is the only one permitted to speak to full-time employees, three of the workers said. And Google is moving groups of contractors out of some offices in the United States and into separate buildings owned by Google but mostly managed by outside contractors.

When Cruz, the temp recruiter, worked in a Google office in Mountain View, California, she sat with permanent recruiters and used a Google email address. Her manager, a Google employee, said he expected to convert her to full-time status after a year as long as she met her hiring quotas, which she did.

That is why she did not say anything when her manager started asking her out. She repeatedly rebuffed him, she said, and his advances turned to harassment. He once invited her to a team outing at a winery that turned out to be just the two of them. That night, he tried to kiss her and put his hand up her dress.

“I had heard that a lot of times when you say something to your recruiting agency, they just take you out of the situation and put you somewhere else,” Cruz said. “And I didn’t want my job to go away.”

She said she had considered reporting a claim when she suspected her manager was looking for a way to fire her. But she was fired in February before she had a chance. Her account was detailed in legal documents seen by The Times. Cruz’s sister, Kristi Beck, said Cruz had told her about the harassment while it had been going on.

Cruz’s agency, Search Wizards of Sarasota, Florida, told her that Google was dissatisfied with her work. She was told that the dismissal was unusual, but that there wasn’t much the agency could do because her manager wanted her gone.

Miranda Hinshaw, chief executive of Search Wizards, said the company did not “discuss past or present employees/contractors with any third party.”

Cruz filed a complaint to Google a month later. Google said it had fired the manager in April after it investigated.

Cruz agreed to a settlement in mediation after months of proceedings. (Google said the matter was now resolved.) But one part of the settlement still gnaws at her: She is not allowed to work for Google again.

“It feels so unfair,” she said. “They took away this very big opportunity.”

Tweets by @forbes_india
A commentator must never have an agenda: Sanjay Manjrekar
Food delivery apps are drowning China in plastic