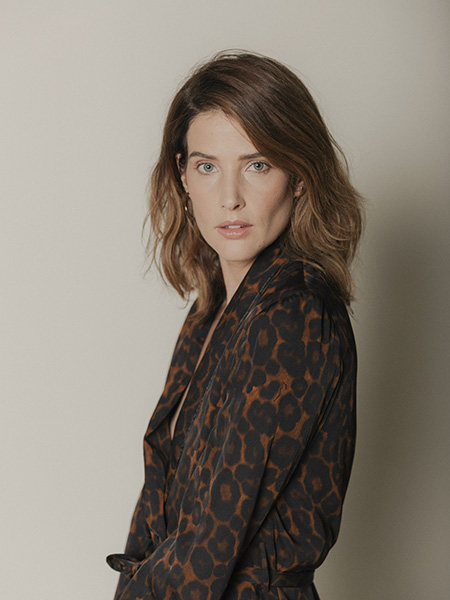 Actress Cobie Smulders in Los Angeles, Sept. 13, 2019. In her new television show, “Stumptown” on ABC, Smulders — known for her role as Robin Scherbatsky in “How I Met Your Mother” — goes darkly funny as a military veteran turned private eye who uses gambling, drinking and sex to numb her post-traumatic stress disorder. Image: Elizabeth Weinberg/The New York Times
These days, Wednesday nights are doubleheaders in the Smulders-Killam household. That’s when “Stumptown,” Cobie Smulders’ new show, is preceded by “Single Parents,” starring her husband, Taran Killam, on the ABC lineup. Not that they were going for a matching set. Or that the network was banking on their relationship to reel in viewers. “It’s very bizarre, a total fluke,” she said, laughing. “I don’t think that they’re believing in our marriage so much that they’re going to skew their whole schedule.” Smulders — who recently ended two seasons of Netflix’s “Friends From College” after nine on CBS’ “How I Met Your Mother” and a recurring role as Maria Hill in a string of Marvel movies — wasn’t even shopping for a series when “Stumptown” came her way. But she couldn’t get Dex Parios, an Army veteran turned private investigator in Portland, Oregon, who uses drinking, gambling and sex to numb her PTSD, out of her head. Adding to the allure: “Stumptown,” based on the graphic novels by Greg Rucka and Matthew Southworth, is both action-packed and comedic. “When you decide to do something as long term as this could potentially be, you have to be really excited about the character and how that person could evolve,” she said. “The great thing about our show is that it isn’t just a drama. I’m getting a lot of really great fight scenes, and it’s also really funny. It’s this combination of all the things I like to do.” Plus — and this is huge — it allowed Smulders, 37, to shoot close to home in Los Angeles, where she and Killam are raising two young daughters. “We’re asking a lot of our children, and that is my top priority and his, too — and making sure they know that they’re a priority,” she said of the struggles of acting parents who have often found themselves working on opposite ends of the country. “I just feel so grateful to be able to be working and living in the same city with my family on a project that I love to do.” These are edited excerpts from the conversation. Q: I’ve reached you on the set today. What are you up to? A: I’m literally strapped into stunt gear, like pads and a backpack, in a really weird seated position on my couch. We are doing a pretty intense fight that’s taking place in a kitchen. It’s always a fascinating thing when you’re on a series and every week you have a fight sequence. I do all the hits and the kicks — anything but where I’m getting thrown somewhere at a very high velocity where something could go very wrong. Q: That helps answer the question, Are you doing a lot of your own stunts? A: Yes, I am. I have an amazing stunt double, Marie [Fink], who certainly does a lot of it, but it’s sort of half and half. I get a little bit controlling. [Laughs] I get really like, I want to do it — put me in there! Marie usually has to do the really big hits that legally, because of a liability issue, I’m not allowed to do because it could shut down production. Forever. So she gets thrown into a lot of walls. Today she’s getting slammed onto a chef’s table. Q: Dex is an Army veteran with PTSD, and one of the ways she copes is through sex. In the graphic novel she’s bisexual. How about in the show? A: This is a woman who does not want to label herself as anything — she doesn’t really adhere to social norms in that way. She’s more of the type of person who, if she’s going to be attracted to anyone, it’s because she’s at the bar super late at night and it’s whoever is left. Q: What kind of research did you do for the role? A; I’ve been lucky enough to play women who have been in the service more than once, and I’ve met a lot of women who were in the service. We had this wonderful woman [Dr. Barbara Van Dahlen, a clinical psychologist] who worked during the Obama administration — specifically with people who are dealing with PTSD and trying to get legislation passed. She was a really great source. But I found when I really got into it that everybody is suffering from some kind of PTSD. If you’re human and you have feelings, at some point in your life you have experienced trauma. Q: It seems like all the classics are getting reboots these days, and every so often we hear wishful thinking about “How I Met Your Mother.” Would you be game? A: I’ve literally not ever had a conversation about it with anybody. I would love to work with everyone again. I just feel like we’re all off doing our own thing. It also doesn’t feel like that long — though I guess it is becoming a long time since it has been on the air. Yeah, of course I would, I would love to. I would definitely not just say no. Q: And what about more of Maria Hill, your Marvel character? That post-credit scene in “Spider-Man: Far From Home,” in which she and Nick Fury are revealed to have been portrayed throughout the movie by the Skrulls Talos and Soren in disguise, seems to beg a sequel. A; It’s an interesting phase for Marvel. I love playing Maria Hill so much. And I’m always ready and willing to be a part of a project. I don’t have anything on the horizon right now that we’re discussing, but of course should they call, I will do everything to make it happen.