How lies and mistrust hurt the American economy

There is substantial evidence that if an atmosphere filled with lies or presumed lies spreads throughout a society, the effect might reduce economic growth rates. Businesses can't plan effectively when they don't know who or what can be trusted 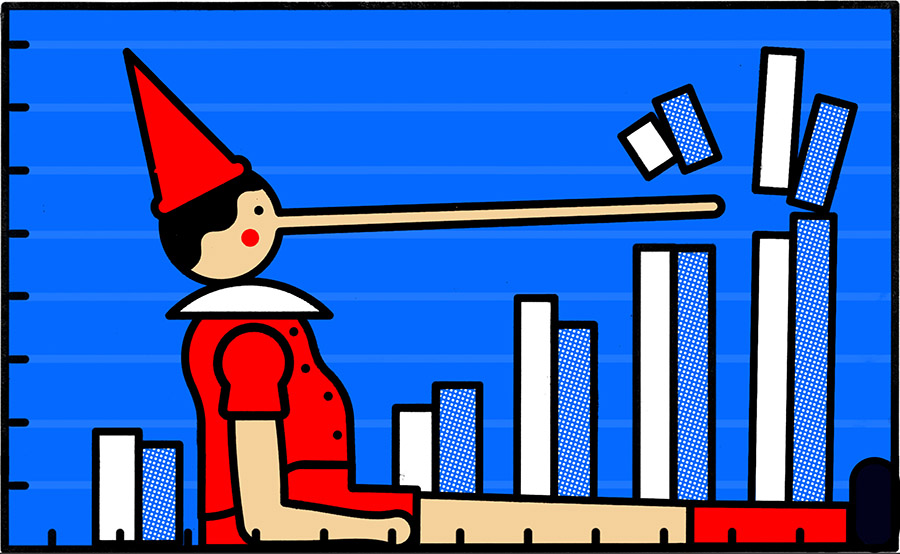 The threat to a free press and the political dangers posed by a culture of lying at the highest circles of government have already been widely reported. But there is another danger, an economic one, and it is worth pondering, too. (Yarek Waszul/The New York Times)

News organizations have devoted considerable resources to tallying and correcting thousands of misleading statements — and outright lies — made by President Donald Trump and his supporters. At the same time, the president has frequently and falsely accused mainstream news organizations of disseminating “fake news.”

The threat to a free press and the political dangers posed by a culture of lying at the highest circles of government have already been widely reported. But there is another danger, an economic one, and it is worth pondering, too.

There is substantial evidence that if an atmosphere filled with lies or presumed lies spreads throughout a society, the effect might reduce economic growth rates. Years of incremental damage would result in a substantially lower level of economic well-being than would otherwise have existed.

The central reason is basic: An atmosphere generated by a steady flow and variety of lies is like a dark cloud over the facts. Businesses can’t plan effectively when they don’t know who or what can be trusted.

A critical question for the United States is the extent to which lying and mistrust have already permeated the entire culture. Alas, we don’t have accurate, current data yet. But the World Values Survey includes a question that asks, “Generally speaking, would you say that most people can be trusted or that you need to be careful in dealing with people?” In the latest survey, done from 2010 through 2014, the United States ranked in the top 20% of countries on trust.

Day-to-day experience may suggest that among individuals, not that much has changed during Trump’s presidency. After all, American honesty has been a powerful national narrative at least since the early 1800s. That was when Mason Locke Weems, known as Parson Weems, told the story of a young George Washington’s reply when asked if he had cut a prized cherry tree. According to this account, Washington said, “I can’t tell a lie, Pa; you know I can’t tell a lie. I did cut it with my hatchet.” This story remains in America’s collective memory, essentially having “gone viral” centuries ago. It won’t be dislodged overnight.

Researchers have found that attitudes toward trust can linger for generations. Differences among people in the United States are often substantially explained by the attitudes that prevail in the countries of their ancestors. This accords with the view that long-term differences in economic success can be attributed to cultural attributes that may be embedded in relatively stable family values.

Nonetheless, lying erodes trust, and this process can be accelerated when publicity is given to lies. Young people in the United States who are just getting interested in politics and the news have seen only this period of rampant lying, and that might affect them for the rest of their lives.

The problem is complex. Trust isn’t an all-or-nothing thing. People have prejudices. They may trust those belonging to one group, or in one kind of circumstance, and not others. Together, they may be spreading viral narratives praising honest entrepreneurs even as they spread narratives about a dishonest president. We have to hope loss of trust remains contained, though it is not clear it will be.

Measuring trust isn’t simple, either. In his 1996 book, “Trust,” Francis Fukuyama, a scholar now at Stanford, examined the role of such social capital in producing economic success. In 2012, Friederike Welter of the University of Siegen in Germany found that there is great “complexity and diversity” to the behavior that we throw under the label of trust.

In talks with strong supporters of Trump, I have found that they are often willing to admit that he has “rough edges.” They suggest that all politicians have to play politics, and, like Mick Mulvaney, the acting White House chief of staff, they sometimes say we need to “get over” that. Being caught in lies seems to them to be no great shame. The greater picture, they say, is that the president has freed himself from the constraints of “political correctness” to state unpopular truths, and to fight for the interests of forgotten Americans. That view seems to show no diminution of a basic sense of the importance of honesty.

Let’s hope that it does not. In fact, it is reasonable to hope through this period of polarization that the narrative of fundamental American honesty suggested by the George Washington cherry tree story is still thriving, and will survive the present experience. However, we are living in an age unlike any other we have experienced in the United States, and we can’t feel secure about the long-term outcome.

In the meantime, it may be helpful if we avoid demonizing people who are poles apart from us, and show that we share with others a faith in our ultimate trustworthiness. We will be happier and more successful if we can retain our basic values.