How the Coronavirus changed the 2020 US Presidential campaign

Almost overnight, everything has changed. Amid deepening uncertainty over a spreading virus and growing anxiety about an economic meltdown, something extraordinary has begun: a life-or-death test of leadership for those seeking the White House this November 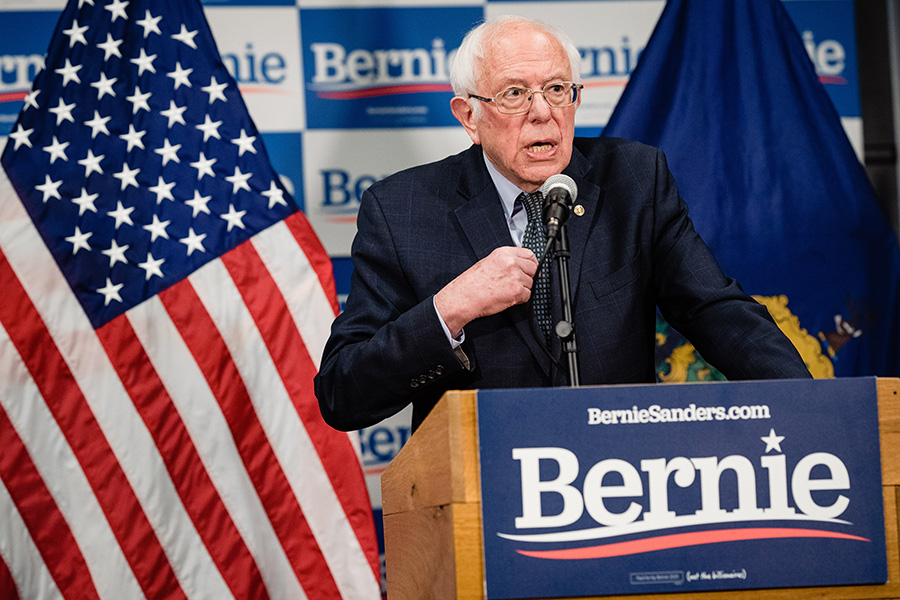 Sen. Bernie Sanders (I-Vt.), a candidate for the Democratic nomination for president, speaks about the coronavirus, in Burlington, Vt., Thursday, March 12, 2020. Overnight the three major candidates for the presidency made quick pivots to shape and guide the country’s new political discourse, in a demonstration of how they would lead Americans across a muddled terrain of social disruption and stock market collapse, of worry about testing kits and concern about travel bans and crowd sizes.
Image: Jacob Hannah/The New York Times

WASHINGTON — For the past year, the Democratic presidential candidates debated the merits of sweeping liberal ideas, fretted over notions of electability and bias, and rose and fell in the polls as voters struggled to choose a front-runner. And through it all, President Donald Trump sniped from the sidelines, demonizing the party and its 2020 contenders as socialists.

Almost overnight, everything has changed. Amid deepening uncertainty over a spreading virus and growing anxiety about an economic meltdown, that kind of classic presidential campaign ended and something extraordinary has begun: a real-time, life-or-death test of competency and leadership for those seeking the White House this November.

Over 18 hours from Wednesday night through Thursday afternoon, the three major candidates for the presidency, including the incumbent, made quick pivots to shape and guide the country’s new political discourse. It was an attempt to demonstrate how they would lead Americans across a muddled terrain of social disruption and stock market collapse, of worry about testing kits and concern about travel bans and crowd sizes.

Just hours after Trump delivered a wooden address from the Oval Office, former Vice President Joe Biden sought to position himself as a sober steward of the national interest, delivering a speech echoing the language and tone of addresses given by presidents in moments of crisis. Biden also went much further than Trump in proposing a detailed plan and a set of goals on testing, increasing hospital capacity and supporting an accelerated push for a vaccine.

“This virus laid bare the severe shortcomings of the current administration,” Biden said, standing in front of a backdrop of American flags. “Public fears are being compounded by pervasive lack of trust in this president, fueled by adversarial relationships with the truth that he continues to have.”

With his sharp criticisms of Trump’s shifting statements about the crisis, and the administration’s inability to stem the falling stock market, Biden was also taking direct aim at Trump’s oft-heard arguments for reelection in November.

The spread of the virus is rapidly becoming a test of Trump’s core message: that despite the controversy the president creates, Americans are better off economically than before he took office and should stick with him, rather than siding with Democrats whom Trump portrays as feckless half-wits who botched the Iowa caucuses and much more.

Now it is Trump who risks looking out of his depth to many Americans, not only in protecting their health but also in guarding their 401(k)s.

Two hours after Biden spoke, Sen. Bernie Sanders of Vermont — the other leading candidate for the Democratic nomination — warned that the death toll of Americans from the coronavirus could exceed the number of U.S. soldiers killed during World War II.

“We have an administration that is largely incompetent and whose incompetence and recklessness have threatened the lives of many, many people in this country,” Sanders said.

The setting of the speeches underscored the unusual situation the campaigns now face. Normally at this time candidates would be traveling the country, rallying supporters at town hall meetings, fundraisers and mass rallies. But both Biden and Sanders have curtailed their travel and canceled big gatherings because of the virus, and on Thursday they found themselves addressing small groups of reporters in sparse hotel ballrooms in their hometowns, Wilmington, Delaware, and Burlington, Vermont.

Political strategists compared the virus to a hurricane, a deeply disruptive event likely to affect broad swaths of the country in unpredictable and devastating ways. The response to those moments can make or break a political career, they say.

“You don’t blame the elected officials for causing the damage that the hurricane ravages across the state,” said Whit Ayres, a Republican pollster with experience on presidential and Senate campaigns. “You evaluate elected officials on how they handle the situation.”

Even as the fate of the country’s health remains uncertain, the dynamics of the primary race are clarifying. After a series of primary wins, Biden now has a delegate lead that would require a nearly impossible turnaround from Sanders to overcome.

That leaves Trump likely to face an opponent whom he spent much of 2019 trying to destroy. Yet, in a moment of crisis, some Democrats argue that the country may turn to a creature of the Washington establishment, seeing Biden as an experienced hand.

“A lot of people, not just Democrats, are going to start looking to Mr. Biden and sizing him up. It’s a real-time test at some level,” said Addisu Demissie, who managed the presidential campaign of Sen. Cory Booker of New Jersey. “Even though he doesn’t have authority, he can show and not tell what four years of a Biden presidency would feel like.”

In particular, Democrats believe the virus will help them hold more moderate, independent suburban voters who don’t like the president’s tone but have stayed with him because of the strong economy. The party won control of the House in 2018 largely on the strength of their support among those voters, flipping a number of seats in battleground districts. Exit polling from Tuesday’s primaries showed that a majority of voters saw Biden as the candidate they trusted most to handle a major crisis.

For rural voters, who are more likely to vote for Republicans, the economic ramifications could affect their bottom lines, particularly farmers and oil workers who are already hurting from trade policies.

Yet, the fiercely partisan moment in Washington has scrambled the politics of unity that traditionally kick into place during national crises. The partisan divide is so pervasive that it has affected not only people’s feelings about the president’s response, but also their fears about the virus itself.

Roughly 6 in 10 Republican voters nationwide said they were not particularly concerned that the coronavirus would disrupt their lives, according to a Quinnipiac University poll released this week. Democratic voters were twice as likely as Republicans to say they are concerned

While privately concerned about the impact on the president’s reelection prospects, Republicans are largely following Trump’s lead in minimizing the worries over the coronavirus and blaming Democrats and the media for focusing on the deaths it has caused.

“One thing the press has not covered at all is the people who have really recovered,” said Sen. Ron Johnson, R-Wis., an ally of Trump’s. “Right now all people are hearing about are the deaths. I’m sure the deaths are horrific, but the flip side of this is the vast majority of people who get coronavirus do survive.”

In recent days, Trump and his administration have taken a more active hand in the public messaging around the response. But senior public health officials have frequently contradicted or corrected statements made by the president; in the late hours of Wednesday evening various administration officials corrected four separate policies that Trump had announced during his nationally televised address.

On Thursday morning, after news broke that an aide to the Brazilian president had tested positive for the coronavirus days after being in proximity to Trump at his South Florida hotel, Trump said he was not worried. The White House later said he had not been tested for the virus himself.

As the election year progresses into unknown territory, the candidates must now find ways to motivate voters from a distance. A number of Biden’s donors and supporters were quietly nervous about the effect that the coronavirus could have on events large and small in coming weeks, saying it had injected a fresh measure of uncertainty into the race.

Scheduled Biden campaign events in Chicago and Miami are being transformed into “virtual events” ahead of next Tuesday’s primaries in Arizona, Illinois, Florida and Ohio. On Thursday, both the Biden and Sanders campaigns instructed staff members to begin working from home.

Trump appears to be stopping all campaign-related events indefinitely, which would remove a major political weapon from his arsenal as he moves into the general election campaign.

Beyond the rallies, the virus throws into question nearly every mechanism of modern campaigning. Already, officials in Arizona, Ohio and Illinois are scrambling to move polling places out of nursing homes — with early voting already well underway.

On Thursday, the Democratic National Committee announced it would move Sunday’s presidential debate to Washington from Phoenix to minimize travel. At least nine members of Congress have self-quarantined after exposure to the virus, including several who had interactions with the president. Across the country, political events are being canceled, including some state party conventions where the delegates who vote on the nominee are elected.

Democratic activists are exploring ways to expand their virtual organizing efforts through Facebook and text. Abortion rights activists are planning a “virtual call center” on Sunday to support a Democrat challenging an incumbent in the Chicago suburbs. The Democratic Party of Wisconsin on Thursday canceled all in-person voter canvassing before the state’s April 7 elections.

“As a campaign, it is completely against every instinct you have: no fundraising and no big events,” said David Pepper, the chairman of the Ohio Democratic Party. “In the final week of a primary that’s the opposite of everything you’d want to do.”

Yet the questions go well beyond mass events and voting and will only get more challenging the longer the virus continues to disrupt social contact. What’s a baby-kissing politician supposed to do when he cannot kiss a baby? How do you gather staff members in a war room, if they can’t be in the same room? Can volunteers go knocking on doors in affected areas? If the campaign moves even more online, can officials protect against a heightened threat of election interference and disinformation?

It’s not known how long the coronavirus and its aftereffects will affect the election or be paramount on voters’ minds.

“There’s a long time until the election,” said Corry Bliss, who ran the House Republicans’ super PAC in 2018. “Last month, the world was convinced the only thing that would matter in 2020 was impeachment.”