How to Beat Tiger Woods 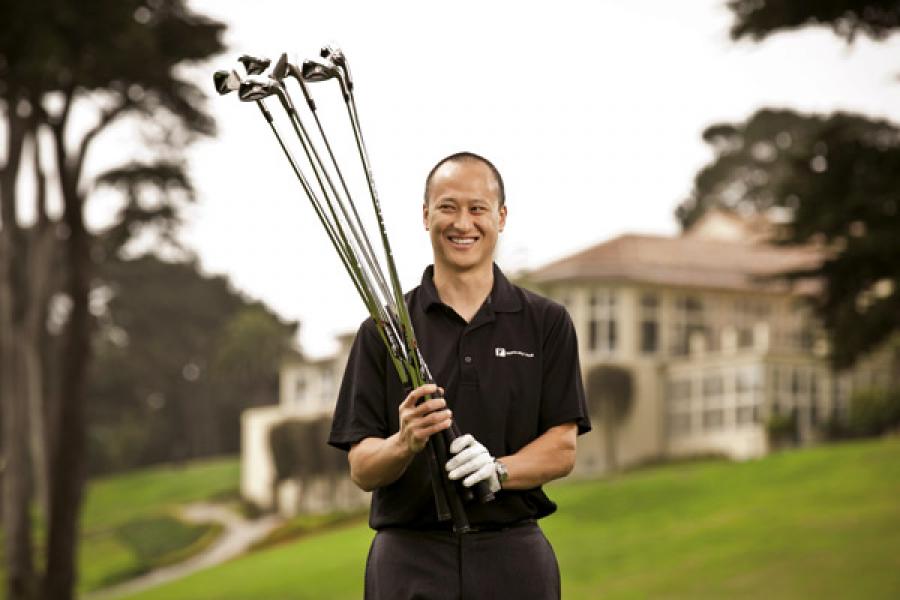 Videogame entrepreneur Chad Nelson was relaxing at a wedding at the Rapallo Golf Club on Italy’s Liguria Coast in 2006 when he looked at the high-deﬁnition photos he was taking of the beautiful course and thought, “Wouldn’t this make for a great videogame experience?”

At the time, Tiger Woods was tearing through the PGA Tour and for years had been the face of the blockbuster Tiger Woods PGA TOUR videogame from Electronic Arts. The idea of taking on EA Sports and its bestselling title was nuts, but Nelson ﬁgured there was an opportunity if he did something completely diferent. When he got back to San Francisco, he and his friend YuChiang Cheng went for it, starting a company called World Golf Tour. Their concept: Make a photorealistic golf game, make it social, make it free and run it through a web browser. Revenue would come from selling virtual goods and sponsorships.

Today, their 40-employee San Francisco ﬁrm, now called WGT, has the number one online golf game and golf website in the world, with more than 5 million registered users and 2.5 million unique monthly visitors (more than Golf.com and PGA.com ). Although EA’s Tiger Woods title still rules the console business, with 30 million copies and $1.2 billion in revenue to date, Cheng says WGT attracts 20 to 30 times as many players as EA’s Tiger Woods online game, which launched in April 2010. The average paying player forks over $30 a month. Michael Pachter, videogame analyst at Wedbush Morgan Securities, believes the market potential for online golf gamers is at least 100 million players, likely more, and the dollar size is probably $300 million to $500 million annually. “WGT is really the only thing going now,” he says.

Nelson and Cheng plan to apply their free-to-play realism to other sports. WGT Baseball: MLB, their Facebook game produced in partner- ship with Major League Baseball, attracted more than 300,000 monthly active users and 1 million-plus registered players in its ﬁrst four months. Plans are to launch it as a full-blown web game in time for spring training of 2013, with real teams and players. “In the future, we’ll have all major sports covered with internet and mobile titles and a strong web presence for each,” said Cheng.

WGT’s golf-game success is in large part the result of its painstaking attention to the look and feel of each course. Sun dapples the fairways, and wind rustles the trees in each of the 15 courses it has captured so far, including Congressional, Bethpage Black, Olympic Club, Pinehurst No. 8, the Old Course at St. Andrews and the Kiawah Island Ocean Course. It is adding two to three new ones per year, and there’s a waiting list of 14 courses from countries such as Japan,  Korea, Sweden and Brazil that want to be incorporated into the game.

The process of turning 18 holes into an immersive digital experience begins by shooting up to 300,000 photos with high-deﬁnition and laser cameras, on land and from a helicopter and plane, each picture attached to an exact location using GPS. Imaging can take two to three weeks and cost hundreds of thousands of dollars per course. The photos are stitched together to make textures and objects in a computer-generated 3D environment.

WGT’s developers then simulate the physical properties of the course’s terrain, hazards and environmental peculiarities in a six-month post- production process. The result is a course that plays to an accuracy of 1 inch of the real thing. Once a course is done and WGT has recouped its costs from the ﬁrst several thousand players, it makes a healthy marginal proﬁt from each additional player who tees of. And by offering the best visuals from day one and releasing the game as a free-to-play online experience, WGT avoids Electronic Arts’ annual ritual of updating the game’s software engine, revisiting each course to improve the visuals and charging another $60 to gamers.

After testing a crude version of their technology in 2007 on the Lincoln Park Municipal Course in San Francisco using GPS devices and HD cameras, the prototype proved that they could accurately map terrain and create a realistic game experience. That course never saw the light of day, but WGT was born, and the ﬁrst challenge course, Bali Hai Golf Club in Las Vegas, was captured for online gamers to play through select shots on each hole.

“The Tiger Woods product wasn’t progressing forward when I left,” says Prata. “It was caught in the ‘Let’s work on the fans on the sidelines’ thing’ There were no revolutionary leaps for the product. They were always in a crunch to get a new game out every year. Moving to WGT was such a huge difference because we could push updates and new ideas directly to consumers as soon as we had them.”

WGT has raised more than $20 million in backing from Jafco Ventures, Panorama Capital and Battery Ventures, but it hasn’t sought venture funding since 2010 and claims to be proﬁtable. Cheng said his players, most of them 30-to 50-year-old men with an average household income of $85,000, spend 40 minutes per session playing with as many as three friends at a time.

The majority of the company’s $40 million to $50 million in revenue (WGT won’t disclose ﬁgures) comes from online tournament fees and sales of virtual goods to players. A new set of clubs can cost $14 in credits. A Lynx LX5 driver costs $2. Nelson says WGT gets more than the industry average of 3% of its users paying for these micro-transactions. An increasing source of revenue comes from advertising, with sponsors such as Cadillac, Dove for Men and Ketel One lured by WGT’s wealthy demographic. WGT was also able to score an exclusive partnership with the United States Golf Associa- tion to capture the official course of the US Open each year. More than 400,000 players took to the virtual greens of the Olympic Club in San Francisco in June to play along with the pros on TV. WGT says it is attracting 200,000 new players a month. In early 2013 the company will add ﬁve new lan- guages, and debut a mobile version on Android and the iPhone. Cheng said the mobile game will be designed for shorter sessions and will link accounts so you can move between phone and PC sessions without losing your place on the course.

The one sport WGT may leave to EA is soccer, as its FIFA game has had success across all platforms. But from the look of things, the small developer has already slayed the giant gamemaker.

Tweets by @forbesindia
India U-19
Who Has the World's Water