How to rebound after a disaster: Move, don't rebuild, research suggests

A new paper makes a case that, sometimes, retreating from nature instead of fighting it can actually open up new opportunities for communities. "You're in a fight with the ocean. You're fighting to hold the ocean in place. Maybe that's not the battle we want to pick." 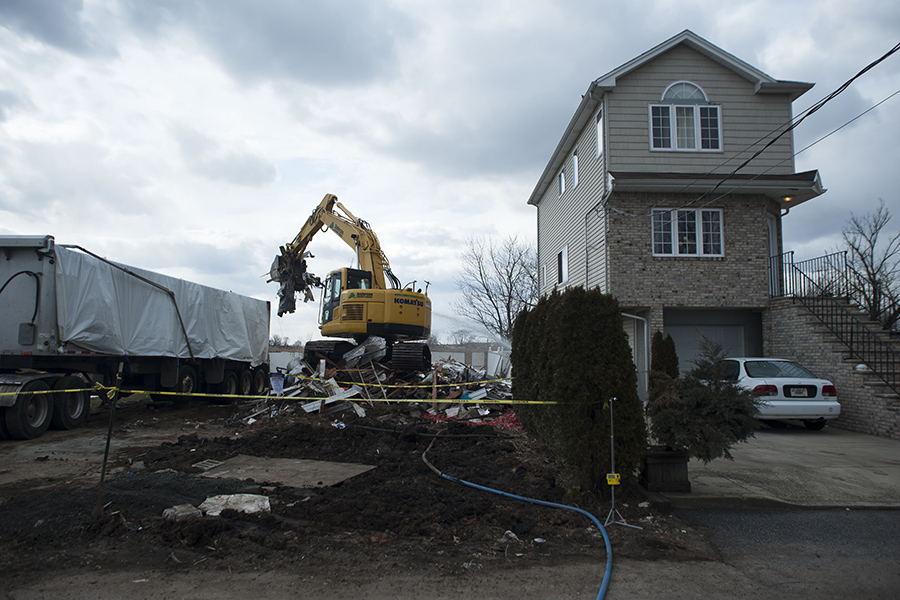 Demolition after Hurricane Sandy in the Oakwood Beach area of Staten Island in New York, Feb. 1, 2013. Many properties there were converted into wetlands as part of a buyout program. A paper in the journal Science makes a case that, sometimes, retreating from nature instead of fighting it can open up new opportunities for communities
Image: Karsten Moran/The New York Times


What should communities do as climate change escalates threats like sea-level rise?
Until now, much of the focus has been on disaster response, with very little discussion of orderly, strategic retreat from areas at risk. After Hurricane Sandy in 2012, for example, the New York state governor’s office ran a public service announcement that made clear the focus would be on rebuilding. But a paper published Thursday in the journal Science makes a case that, sometimes, retreating from nature instead of fighting it can actually open up new opportunities for communities. “There’s a definite rhetoric of, ‘We’re going to build it back better. We’re going to win. We’re going to beat this. Something technological is going to come and it’s going to save us,’” said A.R. Siders, an assistant professor with the disaster research center at the University of Delaware and lead author of the paper. “It’s like, let’s step back and think for a minute,” she said. “You’re in a fight with the ocean. You’re fighting to hold the ocean in place. Maybe that’s not the battle we want to pick.” In fact, people have often retreated after catastrophic weather events. New Orleans, for example, lost roughly half of its population after Hurricane Katrina in 2005, and the city’s population is still only 85% of what it was before the storm. But those retreats have generally been ad hoc, not managed, and not necessarily done with broader social interests in mind. “After major storms, a lot of communities want to relocate,” Siders said. She noted that in New York after Sandy, a number of communities applied for buyout programs to relocate but that only two of them actually got funding. That left people in those other communities with limited options, most of them bad. If they were wealthy, they could walk away from their homes and take the financial loss. But if they had lower income, they often couldn’t make that decision and faced the prospect of remaining in houses they knew were at high risk of flooding. And even if they did manage to sell their homes, they wouldn’t be lessening the risks so much as transferring them to others. The new paper lays out ways communities could practice managed retreats that would address their broader needs. Lack of access to reliable climate-hazard maps, for example, makes it difficult to make informed choices about risk. Such maps must be improved and updated regularly, the paper said. “I’m so glad that these kinds of pieces are getting written and that they’re laying out this sort of agenda for research and practice and thinking around these like very inevitably thorny and conflictual questions of retreat,” said Liz Koslov an assistant professor in the department of urban planning at the University of California, Los Angeles, who was not involved in the study. If communities could practice strategic retreats, the study says, doing so would not only reduce the need for people to choose among bad options, but also improve their circumstances. Siders pointed to Soldiers Grove, Wisconsin, a town of about 500 that, after one too many floods, moved itself out of the flood plain. The community took that challenge and turned it into opportunity, reorienting the business district such that it could take advantage of highway traffic and powering it entirely with solar energy — and they did this in the 1970s. The article not only stresses the viability of retreat but challenges the idea that retreat is based exclusively on geographical factors like elevation and proximity to the coast. “Retreat, in practice, depends at least as much on sort of social, economic, cultural geography,” Koslov said. “It’s not that everywhere should retreat,” Siders said. “It’s that retreat should be an option. It should be a real viable option on the table that some places will need to use.”