In the US, the bulletproof backpack is back in demand

In a dystopian development, a growing number of companies are offering bulletproof backpacks in back-to-school sales, marketing them to parents who are desperate to protect their children from gunmen 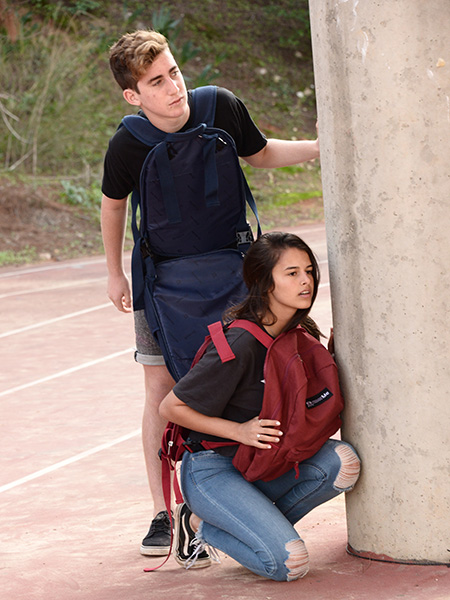 In a photo from ArmorMe, an advertisement for the company's bulletproof backpacks. A growing number of companies are marketing them to parents who are desperate to protect their children from gunmen
Image: ArmorMe via The New York Times

Before his freshman year at the University of Connecticut, J.T. Lewis received an unusual gift from his mother: a bulletproof backpack. Lewis, who will be a sophomore at the university, comes from a family shattered by gun violence: His younger brother, Jesse, was killed in the 2012 shooting at Sandy Hook Elementary School in Newtown, Connecticut. When his mother, Scarlett, gave him the dark-gray backpack, he said, she did not have to say a word.
“We just had a mutual understanding,” said Lewis, 19, who is running for a seat in the Connecticut state Senate. Now he wears the armored backpack on campus because it makes him feel safer, even if it means he sweats a little more under the bulky load. “I don’t know if it’s going to have any effect,” Lewis said. “But it might if I get shot from behind.” As mass shootings become a tragic fact of life in the United States — at schools, stores, movies theaters and houses of worship — it’s not just the families of victims who are investing in protective gear. In a dystopian development, a growing number of companies are offering bulletproof backpacks in back-to-school sales, marketing them to parents who are desperate to protect their children from gunmen. “It’s incredibly depressing,” said Igor Volsky, the director of Guns Down America, a gun-control advocacy group. “The market is trying to solve for a problem that our politicians have refused to solve.” Demand for bulletproof backpacks surged after the shooting at a high school in Parkland, Florida, in February 2018. With back-to-school season approaching, the shootings this weekend in El Paso, Texas, and Dayton, Ohio, have brought renewed attention to the products. In the past, some stores have reportedly sold out of the backpacks, which typically cost $100 to $200. Months before the Parkland shooting, a private Christian school in Miami sold protective panels that could be inserted into backpacks, charging $120 for the bulletproof shields. This year, ArmorMe, a personal-defense company run by a former Israeli commando, Gabi Siboni, started selling a bulletproof backpack that can unfold into a larger covering. “The backpack is designed first of all to be a very stylish and nice-looking backpack,” Siboni said. “And it has panels that protect you against bullets. It will increase your survival chances.” Another company, Guard Dog Security, has been selling bulletproof backpacks since shortly after the Sandy Hook shooting. The products are available at Office Max, Office Depot and Kmart, and the company recently released a model that costs less than $100. “It could be the difference between life and death,” said Yasir Sheikh, who runs Guard Dog. In the past, companies have been criticized for falsely claiming that their armored backpacks were certified by the National Institute of Justice, which oversees the body armor used by law enforcement. The agency, part of the Justice Department, has not certified, or even tested, the bulletproof backpacks and has no plans to do so, said Mollie Timmons, a department spokeswoman. Still, Sheikh said, Guard Dog’s backpack is designed to meet the agency’s Level IIIA performance standard for body armor, which would make it resistant to bullets fired from shotguns and handguns. The backpacks are tested at a facility in Oregon, he said. But Sheikh acknowledged that the backpacks were less effective at blocking gunfire from powerful semi-automatic weapons, like the ones used at Sandy Hook. And gun-control advocates say there is no evidence that armored backpacks, however carefully tested, would keep children safe during a shooting. “We’re asking children to stand up to gunmen because lawmakers are too afraid to stand up to the gun lobby,” said Shannon Watts, the founder of Moms Demand Action for Gun Sense in America, a grassroots gun-control organization. “There isn’t a parent in this country that isn’t terrified. These companies are capitalizing on that.” Siboni, who runs ArmorMe, said it was unfair to accuse his company of exploiting national fears about gun violence to turn a profit. “Whatever you do, you’re capitalizing on something,” he said. “We are just responding to a need.” In several recent Twitter posts, Sen. Kamala Harris of California, a Democratic presidential candidate, has held up bulletproof backpacks as a symbol of the broader problem of gun violence in the United States. “Parents shouldn’t have to buy a bulletproof backpack for their child just to keep them safe in school,” she tweeted in July. “This shouldn’t be normal.” But for Celeste Green, a senior at the College of Charleston in South Carolina, the backpacks seem like a necessary precaution. The day before the shooting in El Paso, Green, 22, learned that a teenager in her hometown, Columbia, South Carolina, had threatened to “shoot up” a local school. When she saw the news, she thought of her younger sister, who is starting high school in the fall. Green sent her mother a few videos and hyperlinks with information about bulletproof backpacks. “Immediately, she was like: ‘Where should I start? Where should I look?’” Green said. “There was no question.”

Tweets by @forbesindia
The tricky task of trying to weaken the US dollar
Stretched to breaking point: WTO is becoming dysfunctional