Jumping into the pool of DIY private equity

Attracted to the high rate of return from private equity funds, amateur investors are setting up high-risk, high-return deals of their own, instead of handing over millions to professional managers 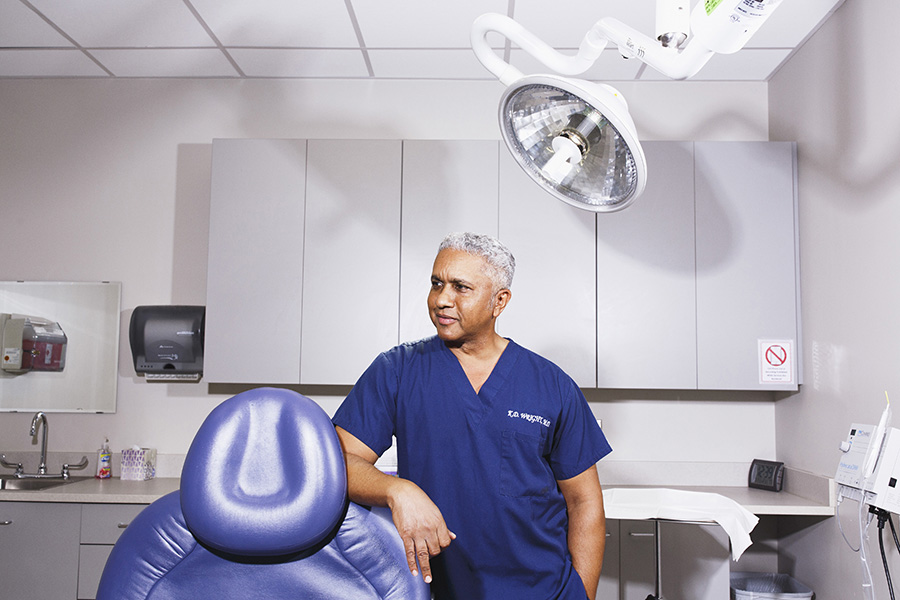 The dermatologist Dr. Keith Wright in an examining room at his practice in Snellville, Ga., July 17, 2019. Wright is part of a group of lawyers and entrepreneurs who have pooled their money to make private equity investments, as the rate of return is attracting amateur investors who are setting up high-risk, high-return deals on their own. (Melissa Golden/The New York Times)

Private equity funds have performed well in the past few years, returning 10% in 2018 alone, beating all other indexes.

That rate of return is attracting amateur investors who are setting up high-risk, high-return deals on their own.

These investors do not want to hand over millions to professional managers. In most cases, they are successful professionals who have adopted a do-it-yourself approach to private equity investing.

Keith Wright, a dermatologist in Atlanta, is part of a group of lawyers and businesspeople in the city who have been pooling their money for about six years in search of the outsize returns of private equity legend.

“It came from the boredom everyone felt with mutual funds,” Wright said. “When we started off, all we were looking for was a home run.”

Some investors seek to cast a wide net across several industries. Donald Prophete, a labor relations lawyer, is president of Omega Investment Partners, a group of eight investors in Kansas City with money in several sectors, including autos, health care and real estate.

“Five years ago, I realized I was in the wrong job,” Prophete said. “My calling was to be an entrepreneur.”

“This is a sign of a hot market all around us,” said Matt Glaser, head of equity, nontraditional investments and research at Wilmington Trust. And that market is drawing armchair experts out of the woodwork.

Glaser said private equity investing takes time and analysis for it to succeed. His team has been taking longer to make investments, fearful of overpaying for a private equity opportunity that may not perform well. His team is about to present a deal to clients, for example, that it has been researching for more than a year; typically, it would spend several months performing due diligence.

These amateur investor groups are another iteration of investment clubs that have popped up around the country for decades. Most of those clubs have sought to channel the collective wisdom of their members to do something that professional investors struggle to do full time.

When putting money into public equities, investors have an out if things go wrong: They sell their shares on the stock market.

Private equity, by design, provides no such escape hatch. An investment in a startup means investors get their money back only if the company goes public or is bought by someone else.

So do these do-it-yourself private equity investors stand a chance? They might, although a lot of work will go into it.

“I think all of these investors get that if it was easy, everyone else would be doing it,” said Alfred Coleman, a corporate partner at Saul Ewing Arnstein & Lehr in Minneapolis, who helped set up the funds created by Wright and Prophete. “But a good portion of what was driving this was access and control. They didn’t have access to these pools and investments, so they had to create it on their own.”

The key to success varies.

It starts with how they hear about deals, known as sourcing. Glaser said Wilmington Trust saw a lot of deals, given the size of its investment capital — $92 billion. But of the hundreds it looks at in any given year, the firm invests in about three. It puts $50 million to $100 million in each one.

Palm Drive Capital, a venture capital firm in New York, has invested in six unicorns, or companies with valuations of $1 billion or more, since its founding in 2014, said Seamon Chan, managing partner at the firm. Palm Drive sometimes looks at hundreds of deals a week, all in the software industry, and passes on most of them, he said.

“When we are interested in moving forward with a company, it’s gone through a big filtering process,” Chan said. Even then, the group tries to negotiate the best terms for its investment. “We’re pretty valuation sensitive,” he said.

In this sense, individuals focused on private equity are at a disadvantage. Their groups are not going to see the best deals, but even if they did, they would not have the capital to invest at that level.

Prophete, the corporate lawyer, said the eight members in his group each put in $125,000 a year. With $1 million on hand, the group has access to a lot of deals, he said. The group has been active for about seven years.

The members rely on their contacts to find opportunities. “We have never not had a pipeline of deals,” he said. These deals are small, though, the type that large private equity funds would not consider.

Successful groups have members with deep expertise in their fields. Whereas a private equity fund can have scores of analysts who cover a wide swath of industries, small private investors cannot afford to take a scattershot approach.

Marques Colston, who played in the National Football League for a decade, is part of The Players’ Impact, a venture that draws on the knowledge of professional and elite athletes across many sports.

Colston has focused his investments on sports-related companies, including sports technology, performance and online gaming. “It was the industry I knew and could have a real understanding of it,” he said.

“We’re trying create opportunities around players transitioning out of sports,” Colston said. Members can invest $5,000 to $100,000 in qualified deals. “It’s an investment vehicle with the thesis that we’re looking to invest in companies where we can move the needle.”

This strategy has long been practiced by private investors at the next level up: the family office that manages money for high-net-worth individuals and typically has tens of millions of dollars to work with.

McNally Capital, a private investment firm based in Chicago, has been investing money for wealthy families for more than a decade. Its investments range from $20 million to $75 million in companies with values of $60 million to $200 million.

Ward McNally, managing partner at the firm, said he would not make an investment unless someone at the firm understood a company’s business first hand.

“The whole thing revolves around improving your odds of success,” he said. “People are so focused on finding the next social media website to create value. You should invest your capital in a way you understand and really leverage who you are with what you know to create value.”

In these smaller funds, group dynamics matter. Personalities clash, and the more individuals who have a say, the harder the investment decisions can be to make.

John Rompon, managing partner of Marjo Investments, which makes private equity investments for wealthy families, said it was essential for one person to be in charge.

“The people not in charge are just making the decision to invest money in the fund,” he said. “It’s not a collective decision.”

Well-conceived documents can put guidelines for the fund in place. But what can seem logical and necessary at the start can have unintended consequences.

Wright said three people had left his group since it started, including the fraternity brother who brought him in, but their money stayed behind. That was written into the fund documents up front.

“If you leave anytime before the 10-year horizon, you redeem nothing and you lose everything,” he said. “It’s painful, but it’s there to encourage you to stick this out.”

If members depart and an investment performs well, they still get nothing.

Coleman, the lawyer who has helped organize several small funds, said people really needed to consider the emotional component of investing in such high-risk, illiquid investments. The investments are relatively small, but the stakes are often high.

“It’s the difference between spending $30,000 on a new boat or car that’s tangible or an investment like this that you hope will pay off but could evaporate in a year,” he said. “They’re not seasoned money managers, and it’s money they don’t want to lose.”

When investments turn out well, there is a feeling of satisfaction from having helped a company that would have been overlooked by larger private equity funds.

“You move from the fanciful exit number and you start looking at the companies you’ve invested in and start caring for their mission,” Wright said. “You want them to have a viable company and you look at the monetary return less.”