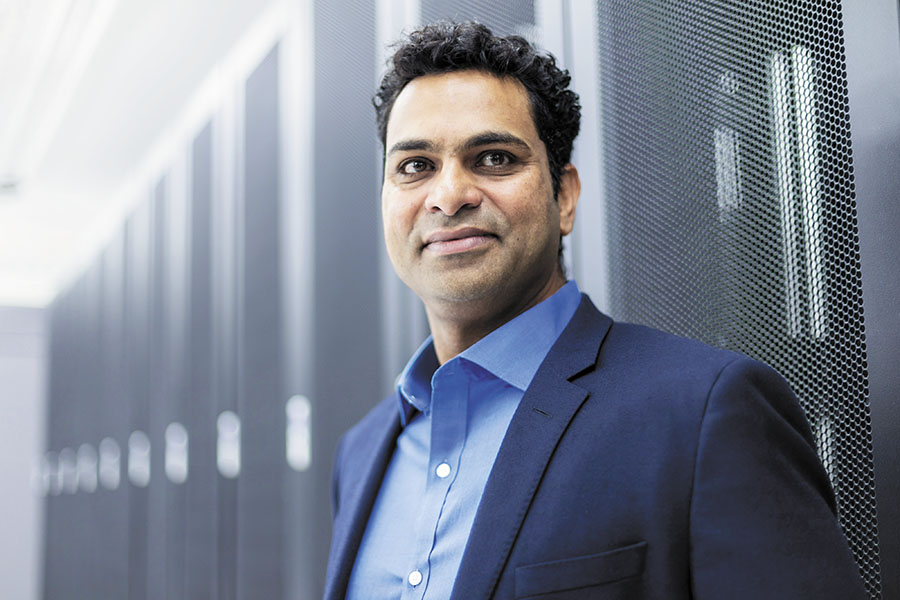 Sridhar Pinnapureddy of CtrlS feels the huge costs incurred on a security measure like disaster recovery eventually propelled CIOs to migrate to the cloud
Image: Harsha Vadlamani for Forbes India

“When we first tried to market our product by pitching it as a ‘cloud’ offering, we only got a lukewarm response. Nobody wanted to talk about it,” recalls Sridhar Pinnapureddy, 40, of a time in the late-2000s when he was trying to offer clients cloud-based disaster recovery services.

The process involved data backup and retrieval by maintaining copies of electronic data on the cloud as a security measure, and Pinnapureddy had sniffed a business opportunity for CtrlS Datacenters, the Hyderabad-based company he had founded in 2008. “In those days, for disaster recovery, clients used to invest in a full setup [servers, hard drives, routers and other expensive hardware] in a remote location, often 800-5,000 km away from their primary data centre. We figured that, on a cloud platform, they could share infrastructure and reduce costs significantly,” he says.

But, for the first six months, his plan found no takers. Finally, at an offsite, Pinnapureddy got together his entire sales team and instructed them to avoid using the word ‘cloud’ because, at the time, the term was associated with lack of data sovereignty, and most companies were not comfortable storing their critical data on public servers.

The strategy worked. “In one quarter, we ended up selling the service to 40 clients,” says Pinnapureddy with a smile. Today, CtrlS serves around 4,000 small-, medium- and large-sized businesses in India. The company has so far built four data centres in the country, in Hyderabad, Noida, Mumbai and Bengaluru, says Pinnapureddy, founder and chief executive of the firm. Its biggest clients include the State Bank of India, Axis Bank and Standard Chartered Bank. The company says it clocked revenues of around ₹100 crore from cloud services in FY2017.

The growth has been fuelled by a change in the mindset of clients. “Conversations have shifted from ‘what is the cloud?’ to ‘how do we get on to the cloud?’,” Akhilesh Tuteja, head of IT advisory practice for KPMG in India and the Europe, Middle East and Africa region, tells Forbes India in an interview.

Market analysts concur. IT research and advisory firm Gartner predicts that the ‘public’ cloud services market in India will hit $1.9 billion (around ₹12,000 crore) in 2017, growing at a compounded annual growth rate (CAGR) of 37 percent from 2016 to 2021. On a public cloud, a data centre company makes resources, such as software and data storage facilities, available to clients and also manages it. For clients, it is a cost-saving measure, compared to the traditional approach of building data centres on their premises.

THE SWITCH
So, what prompted the Indian market to quickly shed its aversion and embrace cloud computing solutions? According to Pinnapureddy, while, initially, chief information officers (CIOs) wouldn’t even want to speak about the idea of “giving away” data to a cloud provider, the huge costs incurred on a security measure like disaster recovery made it easier for them to “let go” and outsource it to cloud service providers like CtrlS.

Once CIOs migrated their disaster recovery systems onto the cloud successfully, they realised that other workloads, such as enterprise resource planning (ERP) and customer relationship management (CRM), could also be transferred in a similar way.

“We would tell our clients, ‘You are buying the entire equipment for these workloads and bearing the capex for it.’ Instead, we offered to provide them dedicated private equipment. If they didn’t want to use it, we would take it back,” says Pinnapureddy, explaining his business model.

And so, the idea of the ‘private cloud’—a network of servers hosted over the internet that are privately owned and dedicated to a particular enterprise—gained currency among Indian CIOs. They could keep ownership of their data, yet get the benefits of cloud. By mid-2010, India Inc had warmed up to the system.

By 2015, “the flavour” of the cloud changed considerably, says Pinnapureddy. CIOs figured that the public cloud infrastructure, in which a private operator hosts a network of servers for a number of enterprises, was a lot more robust, reliable and secure than their in-house data centres. Moreover, it was hard to keep up with the constant upgrades in technology that private clouds demanded. 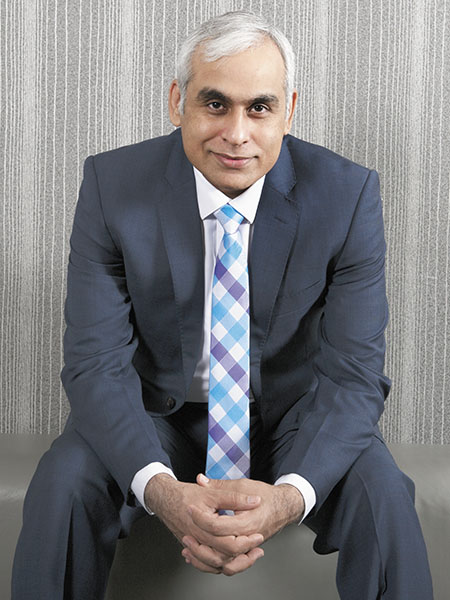 Akhilesh Tuteja of KPMG says the conversation has now moved on from ‘what is the cloud’ to ‘how do we get on to the cloud’
Image: Amit Verma
“Our machines were more robust and fault-tolerant. We spent significant sums of money on creating an extraordinary security ecosystem,” Pinnapureddy adds. CIOs were happy to shift “non-critical” workloads, such as their backup systems, onto the public cloud.

In the meantime, the entry of global players, such as Amazon, Microsoft and IBM, in India, added credibility to the cloud business. “Today, you will not meet a single CIO who says I am not going to go to the cloud. In fact, the decision to migrate is now not just a technology decision that is relegated to CIOs and CTOs. It is a business decision,” says KPMG’s Tuteja.

WINDOW OF OPPORTUNITIES
This shift in mindset has opened a vault of opportunities for technology companies. Even global giants have started to take notice. For instance, when Microsoft CEO Satya Nadella visited India this February, it was clear that the cloud was at the core of his agenda. “The cloud is shaping every business, the public sector and the daily life of every person. It is perhaps the broadest and deepest impact technology has ever had,” said Nadella at the tech giant’s flagship ‘Future Decoded’ conference in Mumbai.

At the heart of his pitch was Azure, Microsoft’s global computing cloud that has over 100 data centres across the world (including one each in Mumbai, Pune and Chennai), which enable businesses to host their IT architecture online rather than buying software to run on their own machines.

Indian businesses, Nadella said, had taken to the Infrastructure as a Service (IaaS) technology, a cloud-computing service where computing infrastructure like servers and network connections are provided as a service to subscribers. Online store Flipkart inked a partnership to adopt Microsoft Azure as its cloud platform, as did the State Bank of India and the government of Andhra Pradesh. Small- and medium-sized businesses (SMBs) and startups, in particular, were quick on the uptake.

“ The move to migrate is no more a technology decision relegated to CIOs and CTOs. it is a business decision.

Global cloud computing leader Amazon Web Services (AWS), which has two data centres in India (both in Mumbai), says it has grown its customer base in India by around 60 percent to over 120,000 businesses from the time it opened its Mumbai ‘regions’ (as data centre providers call the facilities) in June 2016.

Other players in India’s growing market for cloud services include IBM and Google as well as a number of local players such as CtrlS, Pi Datacenters and Sify.

Driving this growth is the promise of lower computing costs and increased business flexibility. The cloud, after all, allows businesses to purchase IT resources as a service on a pay-as-you-go basis. As businesses do away with their onsite data centres, large upfront investments are sidestepped, as are repeated maintenance costs. Instead, businesses can quickly, and cheaply, increase or decrease their data storage, processing and computing capacity as their needs change. It can lead to savings of anywhere between 20 and 30 percent across the entire IT budget, including facilities, telecommunications, infrastructure, software, labour and external services, according to a 2011 McKinsey study.

It also helps that India has a vibrant startup scene, a huge base of SMBs as well as a mature enterprise ecosystem that is driving the demand for public cloud services. The government’s Digital India push, including its e-governance initiatives that involve some sort of cloud technology at the back end, is another catalyst.

“Almost all state governments are deploying a cloud-first strategy. This is a phenomenal opportunity for us,” says Kalyan Muppaneni, founder and CEO of Pi Datacenters, an Andhra Pradesh-based technology startup that has built a 500,000 sq ft data centre in the state capital of Amaravati to offer cloud services to its clients.

SLOW BUT STEADY
Concerns about security and ownership of data notwithstanding, India is clearly positioned as a hot market for cloud vendors. According to Gartner, IaaS services—the kind that AWS and Microsoft Azure offer—have a projected growth rate of 49.2 percent in 2017.

In comparison, Software as a Service (SaaS) cloud offerings—where a software application is hosted on a third-party data centre and provided as an on-demand service to customers over the internet—are expected to clock a year-on-year growth of 33 percent. Freshworks, which offers a portfolio of business management software that helps companies perform a host of tasks like directing customer complaints to the right departments and processing employee reimbursements, is such a company.

Finally, Platform as a Service (PaaS) cloud offerings, defined as a computing platform that allows the creation of web applications or software without having to buy and maintain the infrastructure underneath it, are expected to grow by 32.1 percent this year.

The building of local data centres by global and local players is driving the rapid adoption of IaaS, notes DD Mishra, research director at Gartner. Having local data centres is key for two reasons. The closer a client is to a data centre, the lesser is the lag time for data to travel. Second, in sectors such as banking and insurance, regulatory requirements mandate that sensitive data must be hosted within the country.

Even so, “mindset barriers” still remain, especially for critical workloads, says Bobby MD, who leads cloud partnerships and alliances at Microland. The Bengaluru-based IT infrastructure management services company claims to be “vendor agnostic”, helping clients understand the benefits of each cloud provider based on their requirements as well as make sense of the economics. “Ultimately, migrating to the cloud is an economic decision,” he says.

Investing in partnerships such as those with Microland is critical for cloud vendors to build their presence in the country because, despite the advances made, cloud computing is still in its infancy in India. “While most companies are shifting their non-critical workloads like email and CRM to the cloud, it will take a few more years before they move their more critical applications. They need handholding and like to be in constant touch, which we are able to do,” says Bobby.

Investing in differentiated offerings is also key to staking a claim in the market. For instance, a service provider could focus on a specific sector, say banking, and align its services to the industry. Else, it could specialise in a particular service, like disaster recovery.

During his India visit, Nadella stated that the cloud services market is a $2 trillion opportunity worldwide. The Indian market will clearly be critical to that. And as enterprises experiment with cloud adoption and vendors figure out how best to help them migrate, it’s also clear that this will not be a winner-takes-all business.

(This story appears in the 15 September, 2017 issue of Forbes India. To visit our Archives, click here.)