Mona Lisa is getting a makeover

To help visitors get past the throngs of selfie-snapping tourists, Paris's Louvre museum is fine-tuning a virtual reality tour with 3D views of the portrait that look beyond the crowds, the glass case and the layers of varnish from restorations 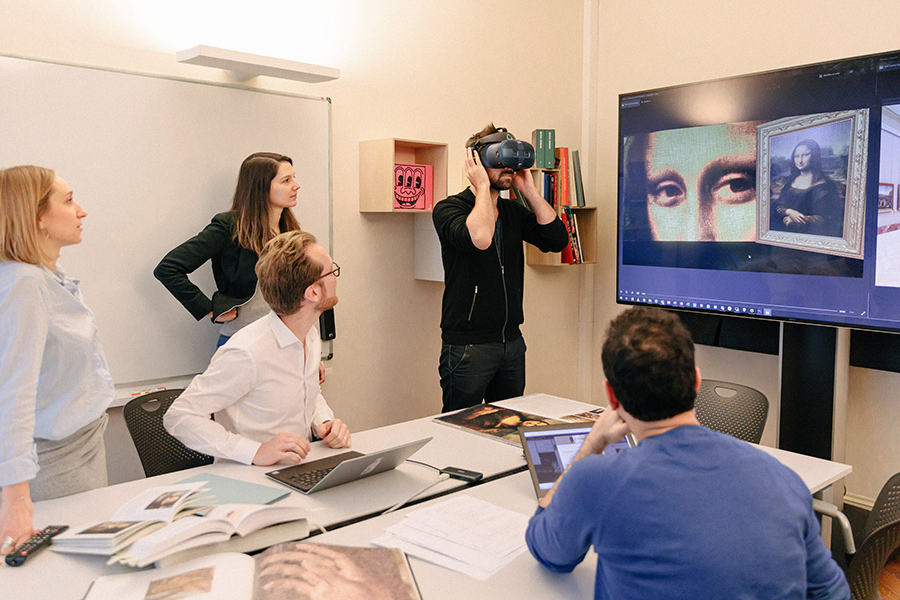 A team at Emissive works on the Leonardo Da Vinci virtual reality tour for the Louvre, at the company's offices in Paris, Oct. 3, 2019. The digital experiment is part of an ongoing effort to broaden the Louvre’s appeal, with France laying new plans to promote its art treasures with virtual reality tours and some lower-tech alternatives.
Image: Andrea Mantovani/The New York Times
PARIS — Mona Lisa’s lingering smile remains the same, but she is getting a first-of-its-kind virtual makeover from the Louvre Museum, which has struggled this year with the popularity of Leonardo da Vinci’s masterpiece and the throngs of selfie-snapping tourists.
With a blockbuster Leonardo exhibition fast approaching, the Louvre and its production partners are fine-tuning a virtual reality tour with three-dimensional views of the portrait that look beyond the jostling crowds, the shatterproof glass case and the layers of varnish from restorations and the fading green patina. The real oil on wood “Mona Lisa” was returned last week to the skylit Salle des États, to coincide with the Oct. 24 opening of an exhibition marking the quincentennial of the death in 1519 of Leonardo, master of the Italian Renaissance. During the summer, while the Salle des États was being renovated, the portrait was moved to the Galerie Médicis, which resulted in severe overcrowding because of limited access. Disappointed tourists complained about fleeting glimpses and barriers that kept them about 15 feet from the 30-inch-tall painting. The virtual reality tour will be a more intimate encounter. The VR tour, designed to remedy the problem of crowds and distance, will be housed in a small gallery room near the main Leonardo exhibition and apart from the “Mona Lisa.” The gallery, equipped with 15 headset stations, will offer seven-minute virtual tours that begin in a familiar crush of visitors with mobile phones aloft. They lead through a gallery of paintings to the portrait of Mona Lisa, the wife of an Italian silk merchant. “She is seated, and spectators will be facing her like a conversation, face to face,” said Dominique de Font-Réaulx, the Louvre’s director of mediation and cultural programming. In this virtual land of Leonardo, spectators eventually fly over a valley and jagged hills aboard a wing-flapping glider he sketched (and which appears in the traditional exhibition). De Font-Réaulx noted that the two curators of the main exhibition have researched all the historical information for the virtual tour narration, including the visual details of Mona Lisa and her surroundings — from the gentle wave of her hair to her velvet dress to the clay tiles of the loggias of 16th-century Florence. The digital experiment is part of an ongoing effort to broaden the Louvre’s appeal, with France laying new plans to promote its art treasures with virtual reality tours and some lower-tech alternatives. In September, Franck Riester, France’s minister of culture, unveiled a project to develop a thousand “micro-follies,” or digital pop-up museums, over the next three years in rural and suburban locations — including movie theaters, libraries, social centers and even hair salons. France intends to spend 3 million euros ($3.3 million) to offer virtual reality and 2D digital tours to show off the masterworks of a dozen major Paris museums, including, potentially, the Louvre’s “Mona Lisa” tour. Not everyone is thrilled with this campaign to make virtual reality a more fundamental part of the museum experience. “I would prefer the Louvre to be involved with reality,” said Didier Rykner, a French art critic and founder of the website La Tribune de l’Art, who argues that the state’s money is better spent on art acquisitions and that the museum should concentrate on organizational issues to reduce crowding. “It’s patronizing. It’s disdain. Everywhere in France you have users and churches and monuments where you can find big art — like a Velázquez or a Caravaggio,” Rykner said. “With 3 million euros, you could buy three masterpieces that you could give to the museums in France, so it would be real art for real people.” But other major museums are already experimenting with VR and are pushing forward based on the results. Earlier this year, the Musée de l’Orangerie in Paris tried out a virtual reality tour inspired by Monet’s Water Lily series that plunged spectators into the artist’s virtual pond in his Giverny garden through animated snowfall and summer days. The reactions of visitors impressed Louvre officials. “Not only young people were using it. There were people over 65, including my father, who is 83,” said de Font-Réaulx, of the Louvre. “It’s very interesting, and we are open to new displays. But it will not replace the works. The content is first. That’s very important to the Louvre.”

Tweets by @forbes_india
Darveys: Offering luxury at a discount
AI can now solve the Rubik's cube