Darveys: Offering luxury at a discount

Despite battling a legal tangle and the effects of demonetisation, founder-CEO Nakul Bajaj is optimistic for the reduced-price e-store, betting big on the inability of the global companies to crack the Indian market 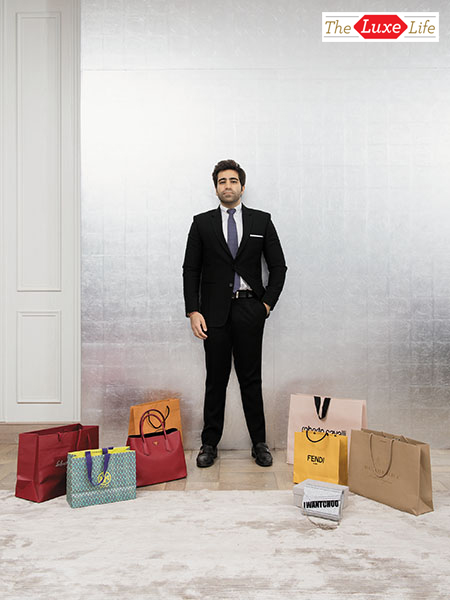 Nakul Bajaj, founder and CEO of Darveys, says you have to be credible to be incredible
Image: Amit Verma; Location Courtesy To The ‘Roseate House’ Aerocity; New Delhi

Nakul Bajaj never realised the essence of what his mother used to tell him during his school days: Life is like an electrocardiogram (ECG) graph. “The curve bounces back up after hitting the lowest point,” the 27-year-old Bajaj recalls. “But a straight line is a dead one.”

Bajaj grasped the concept of highs after lows in 2014 when he started Darveys, an online discounted luxury retail venture. Little under two months of operations, the venture was slapped with legal notices by the Indian partners of three global upmarket fashion labels: Burberry, Jimmy Choo and Christian Louboutin.

Darveys, it was alleged, had infringed upon intellectual property rights by selling high-end fashion products. In one of the national dailies, a half-page advertisement by the local partners of the global brands informed consumers that the companies won’t be responsible for any after-sale services or warranty of the products sold by Darveys.

The 22-year-old panicked. A silver lining, perhaps, was that the charges levelled were that of IP infringement and not selling counterfeit products. The legal case was settled after the Delhi High Court, in November last year, directed Darveys to provide complete disclosure of sellers to consumers, after-sale services like warranty, guarantee of product authenticity, and obtain brand approval for sale if sellers are not located in India, among other things.

Bajaj believes that while the company ended the first year of operations with a modest revenue of ₹3 crore, things have started picking up since. Five years into the business, the membership-only online discounted luxury retailer posted a revenue of ₹15 crore in March 2019, and is now clicking a run-rate of ₹60 crore for FY20. The company is aiming to become a ₹100 crore brand over the next three years. It launched a private label called SelfStich last year, which accounts for 5 percent of the orders currently. The larger target now, Bajaj says, is to meet the aspirations of millions of Indians who want a slice of luxury.

What’s helping Bajaj grow his business at a brisk clip is his business model, which is based on a simple idea: The huge difference in the cost of luxury goods sold in India and abroad. Earlier, while Darveys used to identify authorised luxury boutiques, retailers and resellers across Europe and the US who sold a particular item at the lowest price across the globe, it now sources directly from over 800 overseas partners, and offers up to 60 percent discounts. The top brands on the platform include Ralph Lauren, Hugo Boss, Michael Kors, Versace, Coach, Prada and Tory Burch, the most popular categories being apparel, bags, accessories and shoes.

The model, reckon retail experts, is interesting. Buying luxury at a discounted price is a normal phenomenon in the US, Europe and other global markets. “That’s one of the ways of taking care of the inventory,” says Saloni Nangia, president, Technopak, a retail advisory firm. “It hardly matters if the goods sold are of the present season or the last season. It’s an opportunity for Darveys as long as they sell authentic products.”

Bajaj underlines that authenticity is the backbone of his business. “You just have to be credible to be incredible,” he says, explaining that the company has a policy to offer double the price if a product turns out to be fake. The intent to buy genuine products, Bajaj contends, is reflected in the potential consumers. “You don’t become a member by paying a nominal lifetime fee of ₹2,000 if you don’t trust the brand,” says Bajaj, who had started researching on the workings of the distribution channel of luxury brands from his college days at Emory University in Atlanta. Darveys was launched immediately after his graduation.

Bajaj could also firm up the business model by addressing the gap between demand and supply of luxury products. Indians—especially the ones in Tier II cities and beyond—had exposure to high-end luxury brands and were becoming aspirational. Yet, despite increasing purchasing power, luxury brands were out of reach for many. “I saw a massive opportunity to democratise luxury by making it affordable,” says Bajaj. While most of the global luxury brands were catering to high net worth individuals (HNIs), Bajaj decided to focus on the booming middle class.

The success, though, has been non-linear. After the legal tangle, the second challenge came in the form of demonetisation in November 2016. The business dipped by over 68 percent. Just when things seemed to be getting back to normal, the venture was hit by the implementation of the Goods and Services Tax (GST). It was then that Bajaj pivoted the business model: He moved from directly connecting global sellers to directors, to sourcing from outlets to sell to consumers.

There are also other issues that can rock the boat further. Abhik Choudhury, founder of brand consultancy firm Salt and Paper, identifies two potential threats: One, the Darveys business model can be copied. “It isn’t patentable, and can be cloned by one of the retail giants sooner than later.”

The second challenge could be the nature of the global luxury ecosystem itself. The luxury market, he explains, works like a well-oiled mafia controlled by a few monopolistic brands. “That’s the only way they can control the demand-supply and cost relationship,” he says. So, in the long term, if they find Darveys hurting or straining this relationship, they will create a new channel of their own with the same competitive pricing, guarantee and warranty.

The biggest and ongoing challenge for Darveys is to win the battle of trust. Scepticism against buying luxury goods online still runs very high among Indians. Though they have managed to grow at a fair pace, their next phase of growth will not come from repeat but new buyers. The platform currently has over 1.4 lakh registered members.

For even an online luxury retailer to win the trust of buyers, it’s crucial to reach out to them through advertising and marketing. “Darveys fails on that count,” says Ashita Aggarwal, professor of marketing at SP Jain Institute of Management & Research.

Bajaj, meanwhile, is betting big on the inability of the global companies to crack the Indian market. “The market is hugely under-penetrated and we have not even scratched the surface,” he says.

Tweets by @forbesindia
Healthy living: Salt and hypertension
Mona Lisa is getting a makeover