Netflix's usefulness as a digital baby sitter helped it grow, but it now faces the biggest competitive threat in its history: Disney is determined to be a streaming giant in its own right 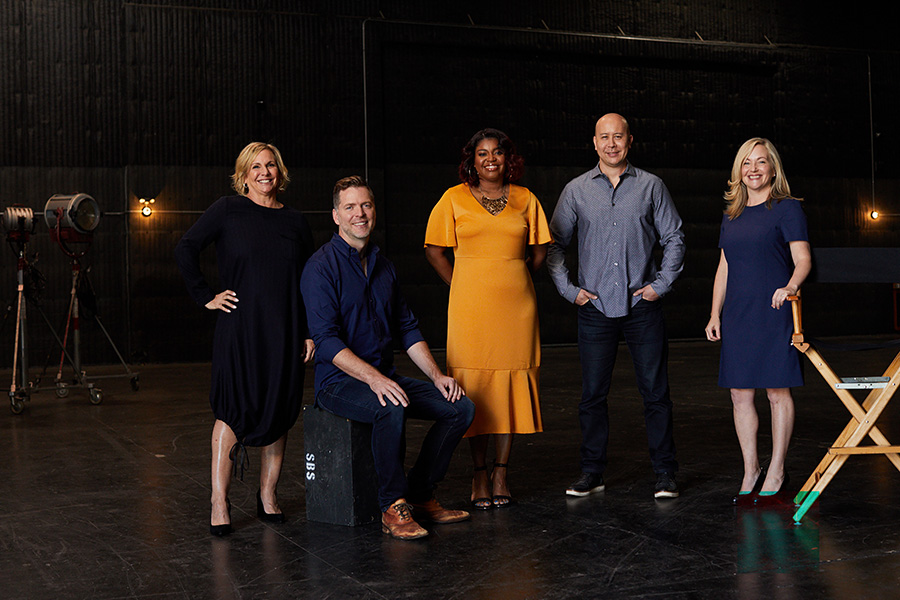 The Netflix executives involved with the family programming, from left: Melissa Cobb, Brian Wright, Naketha Mattocks, Brandon Riegg and Jane Wiseman, in Los Angeles, Sept. 18, 2019. Netflix has been a force in children’s entertainment for years, but it now faces the biggest competitive threat in its history: Disney, the company that has supplied much of Netflix’s most popular programming for children and families, is determined to be a streaming giant in its own right. (Brad Torchia/The New York Times)

LOS ANGELES — Walk the halls of Netflix Animation, spread across three buildings in the heart of Hollywood, and a cheeky question may cross your mind: Is anyone left at Disney Channel headquarters?

Chris Nee, the force behind “Doc McStuffins,” the groundbreaking Disney Channel series, decamped for Netflix in December. She followed Alex Hirsch, a cartoon whiz who created “Gravity Falls” for Disney. Naketha Mattocks, a former executive at the Disney Channel, where she helped steer the popular “Descendants” movies, now heads up Netflix’s family film unit. She is working with Kenny Ortega, a veritable Disney legend known for shepherding the blockbuster “High School Musical” franchise.

“That he has chosen to make Netflix his creative home to work on both feature films and series is thrilling,” Netflix’s chief content officer, Ted Sarandos, crowed in April about Ortega.

Netflix has been a force in children’s entertainment for years, its usefulness as a digital baby sitter helping it grow into a streaming behemoth with 152 million subscribers worldwide. But it now faces the biggest competitive threat in its history: Disney, the company that has supplied much of Netflix’s most popular programming for children and families, is determined to be a streaming giant in its own right.

Disney Plus, a streaming service that arrives Nov. 12, will offer a colossal array of shows and films, including 7,500 episodes of old Disney-branded TV shows, 25 original series, Marvel movies, National Geographic specials, 30 seasons of “The Simpsons” and the entire Disney-Pixar-Lucasfilm library. At $7 a month, Disney Plus will be cheaper than Netflix, which charges $13 for its standard plan.

And Disney will no longer license its content to Netflix. Disney Channel shows like “Sofia the First” and Pixar movies like “Coco” will disappear gradually from Netflix as their contracts end and reappear on Disney Plus.

It has quietly amassed an army of children and family creators and executives who have been stockpiling counterattack content. Sanjay Patel, a longtime Pixar animator, has a series in the works for Netflix called “Ghee Happy,” about pint-size Hindu deities who meet at day care. “Nobody can skip childhood, not even the gods,” he said with a grin from his office, down the hall from Nee, who has five children’s series — five — in the pipeline.

“If you start looking at what people watch and why — the ways that people build habits and build trust — shows and movies for children and families are incredibly important to us,” Sarandos said in an interview.

Original animated movies include “Klaus,” a holiday adventure directed by Sergio Pablos (“Despicable Me”), and an epic called “Jacob and the Sea Beast” from Chris Williams (“Moana”). Glen Keane, a former Disney animator whose credits include Ariel in “The Little Mermaid,” is holed up at Netflix directing a feature-length musical called “Over the Moon” that is based on Chinese mythology.

Netflix has other new children’s entertainment competitors. Apple Plus ($5 a month) arrives Nov. 1 and will offer animated series like “Snoopy in Space.” HBO Max, the coming app from WarnerMedia, announced a deal with “Sesame Street” last week that will bring, for the first time, most of the show’s five-decade library to streaming — more than 4,500 episodes. New “Sesame Street” episodes will also be on HBO Max nine months before their PBS run.

Families are valuable streaming customers, analysts say, because they are reliable, paying month after month instead of “churning” in and out based on what is available. Children’s entertainment also comes with a potentially enormous bonus prize: sales of related merchandise. Netflix has started to explore consumer products; “Super Monsters,” a Netflix show about preschool witches and werewolves, has its own line of Halloween costumes.

About 60% of Netflix’s global audience watches the service’s content for children and families on a monthly basis, according to Melissa Cobb, Netflix’s animation chief. (She came from DreamWorks Animation, where she produced the “Kung Fu Panda” series.) DreamWorks, which is part of NBCUniversal, supplies Netflix’s most popular cartoon series, “The Boss Baby: Back in Business.” Cobb also found a surprise global hit in “Mighty Little Bheem,” which is produced by Green Gold Animation, based in India, an important expansion market for Netflix.

Netflix’s rise has come at the expense of cable outlets like Cartoon Network, which shed 29% of its audience from 2016 to 2018, and Nickelodeon, down 23% over the same period, according to research by MoffettNathanson. Nickelodeon recently agreed to produce a pair of animated movies for Netflix, including one based on Nickelodeon’s “Teenage Mutant Ninja Turtles” franchise. An expansion of that deal has been discussed by the companies.

The money that Netflix is showering on children and family producers has disrupted this often-overlooked corner of Hollywood. Halle Stanford, president of television at the Jim Henson Co., said Netflix pushed to make one project, “The Dark Crystal: Age of Resistance,” even grander in scale than she had hoped, supersizing the budget in the process.

“I suddenly had a gatekeeper willing to take a creative risk — 90 sets, 180 puppets,” Stanford said of the series, which arrived on Netflix in August. “Trust me, most buyers start talking about maybe three sets and eight puppets.”

In total, Netflix has spent billions on its children and family push. It recently bought the rights to animated series based on NBCUniversal’s “Jurassic Park” and “Fast and Furious” franchises. And it has snapped up rights to the “Chronicles of Narnia” and “Baby-Sitters Club” books and made a deal with Roald Dahl’s widow to “reimagine and extend” classics like “Charlie and the Chocolate Factory.”

“In partnership with the estate, we are building out these worlds — exploring what’s beyond the page — which is something that hasn’t happened before,” Cobb said.

Most of the Netflix’s original programming for children and families has only recently started to roll out. The service’s first animated movie, “Klaus,” will debut Nov. 15, a few days after Netflix serves up “Green Eggs and Ham,” an animated series based on the 1960 Dr. Seuss book. “Tall Girl,” released in September, was the first of eight live-action “clean teen” movies coming from Mattocks, the family film executive.

“We want to tell stories that actually feel meaningful and relevant to today’s kids and teens and that don’t talk down to them,” Mattocks said.

“Tall Girl,” about an ostracized high school student, was viewed by more than 40 million Netflix accounts over its first four weeks, enough to rank as the service’s No. 1 movie globally over that time, according a Netflix spokeswoman. To count as a “view,” at least 70% of the movie must be streamed; no independently verified viewing data is available.

Netflix, of course, has lots of challenges as it tries to hold its own against the likes of Disney. The biggest is quality control. “Tall Girl,” for instance, got weak reviews.

And Brian Wright, vice president of original series, will continue to focus on “event” family series, including Netflix’s “Lost in Space” remake, which returns for a second season in December.

“We’re delivering more of those family must-see moments — we’re good at them, but we want to be great,” Wright said. “That is where this entire push comes from.”

Tweets by @forbesindia
Rich List dropouts: What went wrong for Sameer Gehlaut, Tarang Jain, others
The rise and fall of Democracy(.com)